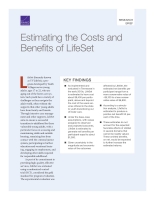 Estimating the Costs and Benefits of LifeSet

LifeSet (formerly known as YVLifeSet), a program developed by Youth Villages serves young adults, ages 17 to 22, who are aging out of the foster care system. Such youth face a variety of challenges as they navigate the adult world, often without the supports that other young adults have from family and friends. Through intensive case management and other supports, LifeSet aims to ensure a successful transition to adulthood for these vulnerable young adults, with a particular focus on accessing and maintaining stable and suitable housing, remaining free from contact with the criminal justice system, participating in further education and vocational training, engaging in employment, and developing other skills required for responsible adulthood.

As part of its commitment to providing high-quality, effective services, LifeSet was evaluated using a randomized control trial (RCT), considered the gold standard for program evaluation. The experimental evaluation was conducted by MDRC for a cohort of participants in Tennessee randomly assigned to enroll in the program between October 2010 and October 2012. Outcomes for the treatment and control groups were compared one and two years after randomization. The evaluation found favorable and statistically significant impacts of LifeSet on at least one primary indicator in three of the six domains assessed: employment and earnings, housing stability and economic well-being, and health and safety. None of the outcomes in the education and training and social support domains was statistically significant. One secondary outcome was favorable and statistically significant in the criminal involvement domain.

As an extension of the original program evaluation, RAND researchers conducted a retrospective analysis of the costs and benefits of LifeSet, as implemented and evaluated in Tennessee. The building blocks for the RAND economic analysis were (1) estimating the net cost of serving the LifeSet participants, (2) assigning dollar values to as many of the outcomes measured in the evaluation as possible, and (3) estimating the net benefits per LifeSet participant, defined as the estimated value of the outcomes minus estimated program costs. The benefit-cost analysis (BCA) measures the costs and benefits to society as a whole, including program participants and taxpayers. All dollar figures reported in this brief are expressed in present discounted values, which account for the time value of money using a 3 percent discount rate. Figure 1 summarizes the BCA results.

The MDRC evaluation estimated the gross per-participant cost of LifeSet as approximately $11,840 in 2015 dollars. However, this estimate does not account for the costs to serve the youth in the control group, who received the usual services available to youth aging out of foster care in Tennessee at the time of the study, plus some supplemental supports. Using the available information, the RAND researchers estimated the "business as usual" cost at about $3,480 per control group member. Thus, the incremental cost for the more intensive LifeSet approach was about $8,360 per participant.

Estimated Value of the Observed and Projected Outcomes from LifeSet

The MDRC evaluation measured impacts of LifeSet in six domains one year after randomization, as well as in the domains of education and training, employment and earnings, and criminal involvement two years after randomization. Statistically significant and favorable effects were found one year after randomization for self-reported earnings; for homelessness, economic hardship, mental health problems, and intimate partner violence (IPV); and for receipt of cash or goods in exchange for sex. Most other outcomes had favorable effects but were small in magnitude and not statistically significant. The effects on some of the measures of educational enrollment and crime, especially by the second year, were in the unfavorable direction, but none was statistically significant. Use of social support programs was higher for the LifeSet participants but statistically significant only for the Supplemental Nutrition Assistance Program (SNAP). This may be viewed as a favorable outcome by some because it means that youth accessed benefits for which they qualified, but it means that the youth were more dependent on government support, which may be viewed by others as an undesirable result.

To estimate the dollar benefits of LifeSet, all outcomes that could be valued were included regardless of statistical significance, and the uncertainty in the estimates was accounted for in the sensitivity analysis. In addition to valuing observed outcomes up to two years after randomization, the measured effects on educational attainment and enrollment were used to project future benefits in terms of earnings, fringe benefits, and other nonmarket benefits.

With this approach, the per-participant benefits for the observed outcomes were about $6,500. The largest component was associated with the value of reduced victimization, primarily that associated with IPV. The effect on observed earnings was just over $400 per participant. The reduction in homelessness and alcohol use generated small savings, while social welfare program use and criminal activity produced small costs.

The other major source of benefits, about $4,900 per LifeSet participant, derives from the projected future benefits from gains in educational attainment. Although the LifeSet participants were somewhat more likely to have a high school diploma or equivalent one year after randomization, they were less likely to be enrolled in postsecondary education another year later. This mixed result produced a positive net benefit for LifeSet participants after accounting for the probability that higher postsecondary enrollment on the part of the control group would translate into higher educational attainment and the associated lifetime earnings and other benefits.

Estimate of Efficiency Loss from Taxation

Assuming that LifeSet is implemented by the public sector, best practice for BCA requires accounting for the effects on economic activity associated the taxes required to pay for the program. Taxes distort economic behavior and result in an efficiency loss. The base-case estimate assumes that it costs $1.25 to raise a dollar of tax revenue (a deadweight loss of 25 percent). This produced an estimate of the deadweight loss per participant of about –$2,100.

With the base-case assumptions, LifeSet is estimated to generate positive present-value net benefits of about $1,000 per participant or a benefit-cost ratio of 1.10. Under the base case, it is important to keep in mind that there were several outcomes measured in the LifeSet evaluation that could not be readily valued, especially aspects that improve quality of life beyond any direct pecuniary effects (e.g., improved housing security). Although many of the estimated effects for the omitted outcomes were small in magnitude, they would be expected to produce additional benefits, as shown in Figure 1. In a few cases, the combined effects of the omitted impacts are uncertain, such as the combined effects on LifeSet participants of increased health insurance coverage, improved mental health status, and increased health care utilization, which could be expected to both increase and decrease costs, with an uncertain net effect.

The base-case estimates rest on assumptions about the economic values of the outcomes affected by LifeSet, as well as the value of the resources used by the control group. In most cases, there was a range of possible values based on estimates available from the MDRC evaluation or from the research literature. At one extreme, using more conservative assumptions for all values, the bottom line is an estimated present-value net loss of as much as –$5,100 per participant. Using less conservative assumptions for all parameter values indicates that present-value net benefits could be as high as $6,800 per participant. Both of these extremes omit any valuation for the omitted outcomes listed on the right side of Figure 1. Thus, the two extreme estimates may be both too negative and not positive enough.

There are other sources of uncertainty, such as those associated with the estimated impacts from participating in LifeSet. As a further sensitivity analysis, Monte Carlo simulation estimated the likelihood of a positive present-value net benefit estimate, based on assumptions about the distribution of both the impact estimates and economic values. That analysis showed that, in 53 percent of the simulations, net benefits were greater than zero, indicating a positive economic return. This indicates that there is uncertainty about whether LifeSet, as implemented and evaluated in Tennessee in the 2010s, had produced a positive economic return, based on two years of follow-up and some future projections.

This retrospective BCA for LifeSet provides a guide to the likely cost and benefits that might be realized for LifeSet as it expands into other jurisdictions. However, depending on various factors, sites implementing LifeSet could experience stronger economic returns or returns that are diminished, relative to those presented here. A prospective BCA for future implementation would need to account for how LifeSet program costs, impacts, and economic valuation might differ depending on the characteristics of the population served, the "business as usual" supports in the community for youth transitioning out of foster care, the fidelity of implementing the LifeSet program model, and other conditions during program delivery (e.g., the state of the economy, the availability of affordable housing in the community). The expected economic returns could be even higher if delivery of LifeSet becomes more efficient over time (and thus costs per participant are lower) or if the program becomes even more effective at improving outcomes for the population it serves. On the other hand, if the program is not implemented with the same degree of efficiency and effectiveness as the program in Tennessee, the expected returns could be lower. Ongoing data collection to measure program costs and monitor implementation, as well as periodic evaluations of the program's impact, would continue to ensure that LifeSet is achieving its shorter- and longer-term objectives as efficiently and effectively as possible.