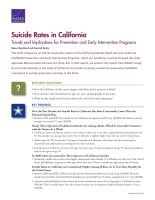 Trends and Implications for Prevention and Early Intervention Programs

This brief is based on an interim evaluation report of the California Mental Health Services Authority (CalMHSA) Prevention and Early Intervention Programs, which are funded by counties through the voter-approved Mental Health Services Act (Prop. 63). In that report, we present the results from RAND's analysis of suicide fatalities in the state of California to provide necessary context for evaluating CalMHSA's investment in suicide prevention activities in the State.

Over the Past Decade, the Suicide Rate in California Has Been Consistently Lower Than the National Suicide Rate

Nearly Three-Quarters of California Suicides Are Among Adults, Which Is Generally Consistent with the Nation As a Whole

In 2009, Males Accounted for Three-Quarters of California Suicides

Suicide Rates in California Are Consistently Higher Among Whites, As Is True More Broadly for the United States 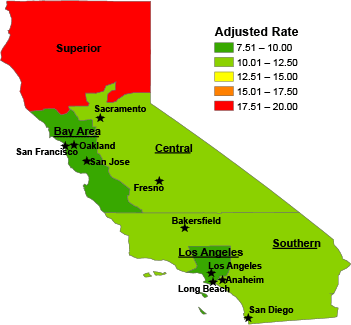 Suicide Surveillance in California Could Be Improved