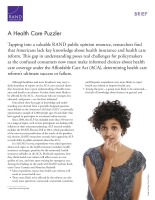 An American Life Panel survey finds that a lack of knowledge about health reform and health insurance is especially acute among the poor, less educated, young, and females. This presents challenges for implementation of the Affordable Care Act.

Although headlines and news broadcasts may carry a daily drumbeat of reports on the ACA, new research shows that Americans have a poor understanding of health insurance and health care reforms. Further, those most likely to be affected by the ACA — Americans who are younger, less educated, and poorer — are the least informed.

Data about these key gaps in knowledge and understanding were derived from a specially designed questionnaire fielded on the American Life Panel (ALP), a nationally representative sample of 6,000 people ages 18 and older who have agreed to participate in occasional online surveys.

Since 2006, the ALP has included more than 350 surveys on a range of topics, such as how participants are dealing with inflation or their retirement planning. ALP research notably includes the RAND Election Poll in 2012, which provided one of the most accurate predictions of the results of the presidential election. RAND researchers recently have tapped the ALP to track shifts in public sentiment about the ACA.

In a fall 2013 survey, respondents were asked questions about such topics as the health insurance mandate, health insurance exchanges, penalties for the uninsured, health insurance subsidies in the ACA, Medicaid expansion, how they think health care reform will affect access to care, quality of care, and time spent waiting for emergency care. Among the findings in the study with RAND authors Katherine Grace Carman and Sebastian Bauhoff:

The findings of this research point to a need for policymakers to zero in on ways to help Americans, especially the poor and least informed, by giving them health insurance options plainly presented and in ways that benefit them the most. When offering health care coverage online — now labeled as silver, gold, and platinum policies — insurers may, for example, wish to provide first and as a default the least costly version of each plan. This study underscores the need for continuing information campaigns about health care insurance and reform.