Understanding the Costs and Benefits of State-Level Immigration Policies

by Lynn A. Karoly, Francisco Perez-Arce

In the past 15 years, faced with a lack of comprehensive immigration reform at the federal level, almost all states have moved to enact their own policies regarding unauthorized immigrants. These policies predominantly center on law enforcement, employment verification, higher education, driver's licenses, and public benefits.

The growing role of states in these areas of immigration-related policy raises questions about the consequences of state-level action for various stakeholders in the public and private sectors. To inform these policy discussions, RAND researchers

Motivated by concerns about unauthorized immigrants' effects on state budgets and the economy more broadly, some states have pursued policies that are restrictive relative to the status quo to reduce the number of unauthorized immigrant residents or to discourage newcomers (see Table 1). In six states (Alabama, Arizona, Georgia, Indiana, South Carolina, and Utah), these policies have been packaged in omnibus legislation that place multiple restrictions on unauthorized immigrants. Other states have enacted specific laws or policies — such as involving local law enforcement in upholding federal immigration laws or requiring some or all employers to use a federally operated voluntary system, E-Verify — to determine whether a prospective employee is a U.S. citizen or otherwise legally authorized to work in the United States.

Other states have adopted policies that are unrestrictive toward unauthorized immigrants (see Table 2). For example, as of June 2015, 20 states allowed unauthorized immigrants access to in-state tuition or financial aid at public colleges and universities when they otherwise meet the residency rules and other eligibility requirements. Other such unrestrictive policies include removing immigration status as an eligibility criterion for state-issued driver's licenses and for publicly subsidized prenatal care for pregnant women and health insurance for children.

Table 1. Common State-Level Policies That Are Restrictive Toward Unauthorized Immigrants

a Does not include states with agreements under Section 287(g) of the Immigration and Nationality Act, codified at 8 USC § 1357.

Table 2. Common State-Level Policies That Are Unrestrictive Toward Unauthorized Immigrants

Summary Status of State Immigration Policy as of June 2015 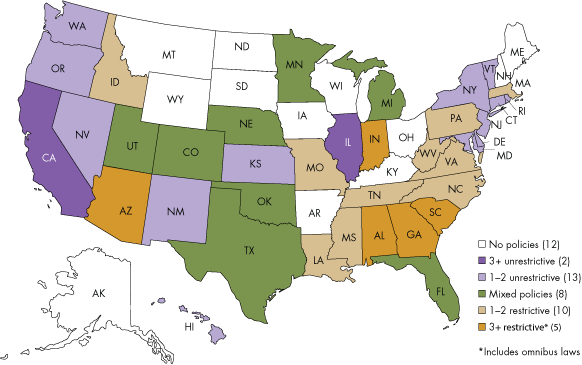 A Tool to Better Understand Costs and Benefits of Immigration Policies

To contribute to a better understanding of the potential impacts of state-level immigration policies, RAND researchers drew first on theoretical considerations and empirical evidence to develop a cost-benefit framework for each of the policies in Tables 1 and 2. Each framework identifies the set of effects a policy might have and how those effects create costs or benefits for the following stakeholders: unauthorized immigrants, authorized immigrants (including naturalized U.S. citizens), the native-born, employers, and state and local governments. Aggregating across stakeholders provides the societal perspective of the costs and benefits of any given policy.

As part of their analysis, the authors reviewed empirical studies examining the causal impact of each policy as implemented. Most of the available research exploits the variation across states and through time in the policy environment to estimate the impact of one or more policies (or policy variants) on the level and share of key population subgroups (e.g., unauthorized immigrants), labor market outcomes (e.g., employment and wages), and other relevant outcomes (e.g., educational attainment in the case of in-state tuition policy).

The cost-benefit frameworks developed in the study can be used to illuminate the array of impacts that any given policy may have and which stakeholders are expected to experience costs or benefits. Each framework can also be a guide to the development of future cost-benefit analyses (CBAs) of any given policy or in the assessment of the quality of prior CBAs.

Insights from the Frameworks and Literature

These frameworks and accompanying literature review produced a number of key findings.

State-level policies may produce effects in multiple domains, including spillover effects for diverse stakeholders. Whether omnibus legislation or a more targeted policy change, state-level immigration policy impacts may accrue in multiple policy domains. For example, impacts may be found not only in the size of the unauthorized population in the state, but also in the level and distribution of state economic activity; levels of employment and wages, sectoral makeup of employment opportunities, and relative wages across worker subgroups based on skill; educational enrollment and attainment; law enforcement and the criminal justice system; the social welfare system; population health and utilization of health care; and state and local government taxes and expenditures. Although unauthorized immigration is often the target of state-level immigration policy, theory would suggest (and empirical evidence confirms) that there can be spillover consequences for authorized immigrants and the native-born population. This is especially true for policies that affect the labor market, and also arises when policies have consequences for mixed-status families, in which one or both parents are unauthorized immigrants but some or all of their children are native-born U.S. citizens. CBAs can help policymakers assess the full range of potential impacts — both intended and unintended — and determine policy costs and benefits in aggregate and for specific stakeholders in the public and private sectors.

Some expected effects have a clear direction of impact; others are more uncertain. In assessing the expected effects of policies focused on unauthorized immigration, some can be clearly designated as positive, negative, or neutral, in relation to the status quo. In the case of restrictive policies, the first-order effects for the unauthorized immigrant population are typically unfavorable. For example, in states that mandate the use of E-Verify, unauthorized immigrants would likely face decreased employment and loss of earnings. Conversely, policies that are unrestrictive toward unauthorized immigrants, such as making in-state tuition available regardless of immigration status, are expected to clearly benefit such immigrants in terms of both lower out-of-pocket education costs and higher lifetime earnings based on higher educational attainment.

The expected net impact of other outcomes, such as second-order effects on labor supply or labor demand, are less certain. With the E-Verify example, some unauthorized immigrants may experience net gains if wages increase for lower-skilled workers (because of reduced supply from unauthorized immigrants avoiding the state) and if they are able to remain employed through self-employment or if they work in a sector that is not covered by the E-Verify requirement. Given these uncertainties, empirical research that assesses actual outcomes for unauthorized immigrants and other population groups in states adopting immigration policies relative to those that do not could strengthen state-level decisionmaking.

Few formal CBAs of state-level immigration policies have been conducted. Although a formal CBA would more thoroughly identify the expected net effects of a given policy for any particular stakeholder group or for society as a whole, the authors identified few formal CBAs of state-level policies in their review of the literature. Many studies calculate the net fiscal or economic impact of immigration in total or unauthorized immigration in particular, but do not provide analyses of specific state-level policies and their impacts. Other studies focus on the costs or benefits of specific immigration policies or bundles of policies to support or oppose a policy change and therefore do not provide a comprehensive, balanced assessment that considers net impacts on all stakeholders. In many cases, such studies do not incorporate empirical evidence regarding policy impacts and instead rely on ad hoc assumptions about such effects. Two CBAs reviewed by the authors demonstrate the insights that can be gained from rigorous CBAs, including estimates of overall economic and fiscal impacts, as well as distributional consequences. For example, a CBA of the Maryland Dream Act shows that granting unauthorized immigrants access to in-state tuition would pass a cost-benefit test in aggregate and for the public sector under a range of assumptions. The RAND framework also helps identify any unmeasured impacts in CBAs and the implications for the bottom-line conclusions of the CBA.

Predominance of certain state policies may reflect underlying cost-benefit calculations. Notwithstanding the limited number of formal CBAs focused on state-level immigration policies, the evidence does appear to indicate that stakeholders have been performing such cost-benefit calculations implicitly in making policy decisions at the state and local levels. For example, each of the top six states where unauthorized immigrants reside has extended in-state tuition to unauthorized immigrants, and California and Texas make state financial aid available as well. Indeed, in-state tuition eligibility for unauthorized immigrants is the most prevalent of the unrestrictive policies the study examined, enacted in 20 states, suggesting that policymakers have recognized a likely positive economic return and savings to government from investing in the education of all immigrants, regardless of status.

State-level action on immigration policies in the face of inaction by the federal government continues to be a contentious issue, reflecting the fact that such policies have distributional consequences with winners and losers. In such an environment, the application of a cost-benefit framework to assess state-level immigration policies can offer a more objective, balanced picture of the expected positive and negative effects of such policies, including the dollar values associated with those outcomes, whether society as a whole benefits from the policy change, and which stakeholder groups are likely to experience net gains versus net losses.

The recent pace of state-level policymaking in this area suggests this will be a critical and ongoing policy challenge. RAND's framework offers governors, legislators, and other state and local decisionmakers a useful tool to evaluate both existing policies and those they may push for in the future.