This report draws on a wide variety of Chinese primary sources to provide an overview of how the Chinese People's Liberation Army Air Force (PLAAF) selects and trains what it calls its elite fighter pilots. One of the most important lessons learned has been the PLAAF's desire to move toward less scripted training. 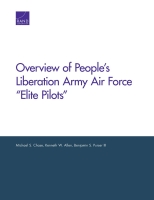 This report uses Chinese primary sources to provide an overview of how the Chinese People's Liberation Army Air Force (PLAAF) selects and trains what it calls its elite fighter pilots. The PLAAF identifies three groups of pilots as elite pilots. The first comprises 33 pilots who have won the annual Golden Helmet competition at the Dingxin Test and Training Base in Gansu province since 2011; the Golden Helmet is "the supreme contest among Chinese fighter pilots." The second group comprises pilots who belong to the PLAAF's Bayi Aerobatics Team, created in 1962. The third comprises six Su-30 attack pilots, including one Golden Helmet winner, who competed in Russia's Aviadarts 2014 competition for the first time. While each of the three groups competes using existing flight procedures, the lessons learned are reviewed extensively for ways to change existing tactics and combat methods. For example, one of the most important lessons learned has been the PLAAF's desire to move toward less scripted training, which Chinese sources typically refer to as "unrestricted air combat" or "free air combat" training. Official Chinese media reports on the PLAAF's Golden Helmet competition, its participation in the Russian Aviadarts competition, and the Bayi Aerobatics Team's participation in air shows in Russia in 2013 and Malaysia in 2015 appear to reflect a desire on the part of the PLAAF to project a more open and confident image at home and abroad. In 2014, the PLAAF implemented a Golden Dart competition to identify elite ground attack and bomber crews.

Elite Pilots Consist of Three Groups of Pilots in the PLAAF

The research described in this report was prepared for the United States Air Force and conducted by RAND Project AIR FORCE.