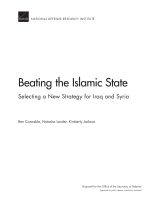 Selecting a New Strategy for Iraq and Syria

The U.S.-led strategy to defeat the Islamic State (IS) — a hybrid insurgent-terrorist group that as of mid-2016 controls territory in both Iraq and Syria — has been criticized for a lack of clarity, overemphasis on tactical objectives, and insufficient attention to the underlying causes of the greater civil conflict across both Iraq and Syria. This report assesses the current strategy and presents three options for a new strategy. Each of these options, derived from subject-matter-expert input, represents a broad strategic approach to defeating IS. Continuous counterterror focuses on containing and suppressing IS while accepting ongoing instability in Iraq and Syria. Practical stability seeks to reestablish the pre–Arab Spring order in Iraq and Syria, building stable states at the probable expense of democracy and human rights. The report recommends the third option: Legitimated stability. This approach pursues a long-term strategy that seeks to address the root causes of the conflicts in Iraq and Syria, reconciling the disenfranchised Sunni Arab populations with their governments, and thereby removing the conditions that allowed IS to emerge and thrive. Other alternatives that fail to address root cause issues are likely to condemn the U.S. and its allies to continual crisis and unpredictable and unending reinvestment of resources, with little real gain in security or reduction in international terror.

Root Causes Can Be Bypassed or Suppressed, But Doing So Ensures Lasting Instability