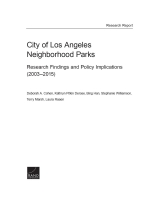 This report summarizes more than a decade of research on how well neighborhood parks in Los Angeles support physical activity. Between 2003 and 2015, researchers at the RAND Corporation studied 83 parks in the city of Los Angeles, conducting thousands of observations and fielding nearly 28,000 surveys of park users and local residents. About half of all residents said that they used their neighborhood parks, most of them routinely. Parks are also the top venue that people choose for engaging in routine exercise. The majority of residents, including residents of low-income, high-crime neighborhoods, consider their neighborhood parks safe or very safe. We also found that parks get more use when they are larger, when they have more facilities, when they offer more planned activities and events, and when their services and activities are marketed to the public. While there is frequent activity in city parks, there is room for improvement. Parks are underutilized by girls and teenage girls, and they are especially underutilized by seniors. Overall, nearly half of all Los Angeles city residents living within 1 mile of a park did not use that park. Most did not know about the activities that were offered, and the majority of residents and more than a third of park users did not know the park's staff. Recommendations include devoting more resources to outreach and marketing. Los Angeles should also devote a larger proportion of its budget to city parks: Park spending per capita in Los Angeles is currently less than half of the per capita amounts that are spent by New York, Seattle, and San Francisco.

There Is Frequent Activity in Los Angeles City Parks

But There Is Also Room for Improvement

This research was conducted in RAND Health, a division of the RAND Corporation.