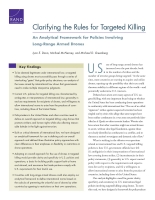 Clarifying the Rules for Targeted Killing

This report highlights a need for greater clarity, specificity, and consistency in U.S. international legal policies involving the use of long-range armed drones in targeted killing. To meet this need, researchers designed a framework for policymakers to use in defining policies that would serve to protect civilians and human rights while also allowing reasonable latitude in transnational conflicts with organized terrorist groups. The framework is built on critical elements of international law related to the use of drones and incorporates alternative legal policy interpretations drawn from administration officials and those critical of U.S. policies. Such a framework could also be used in the design of end-use policies for recipients of U.S. drones as well as by the international community in defining international norms for the use of drones in targeted killing.

What Is the Current Landscape on Drone Use in Targeted Killings?

What Steps Should Be Taken?

This research was supported by a grant from the Open Society Foundations and conducted within the International Security and Defense Policy Center of the RAND National Security Research Division (NSRD).