This report examines the direct and indirect costs of the 12-percent Federal Retail Excise Tax (FRET) on certain types of vehicles purchased or refurbished by the U.S. Department of Defense. It outlines three prospective reform options that could reduce the indirect or social costs of FRET through legislative and non-legislative efforts. 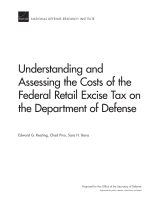 Certain types of medium and heavy tactical wheeled vehicles purchased or refurbished by the U.S. Department of Defense (DoD) are subject to a 12-percent Federal Retail Excise Tax (FRET) on the retail price or refurbishment cost of the vehicle. Original equipment manufacturers (OEMs) pay FRET, but are reimbursed for these payments by DoD. FRET proceeds are provided to the Highway Trust Fund (HTF).

FRET imposes two types of costs on DoD and its OEMs.First, there is a direct cost of DoD reimbursements to OEMs for FRET payments. DoD vehicle FRET payments were especially sizable (more than $200 million annually) from fiscal years 2007 to 2011. Second, FRET imposes indirect costs in the form of increased administrative costs, both within DoD and on its OEMs, as they strive to comply with FRET regulations. FRET also increases OEM working capital costs, as OEMs must pay FRET before they are reimbursed for it. The indirect costs of FRET are social costs of the mechanism, losses not offset by gains to the HTF.

We consider three prospective FRET reform options that could reduce its indirect or social costs; (1) DoD receives a blanket exemption from vehicle FRET; (2) DoD provides a direct financial offset on vehicles purchased or substantially refurbished to the HTF and OEMs make no FRET payments on DoD vehicles; and (3) DoD makes an annual payment, perhaps indexed for inflation, to the HTF unrelated to annual DoD vehicle purchases or refurbishments.

The research described in this report was sponsored by the Office of the Under Secretary of Defense for Acquisition, Technology, and Logistics, Manufacturing and Industrial Base Policy (MIBP) and conducted within the Acquisition and Technology Policy Center of the RAND National Defense Research Institute, a federally funded research and development center sponsored by the Office of the Secretary of Defense, the Joint Staff, the Unified Combatant Commands, the Navy, the Marine Corps, the defense agencies, and the defense Intelligence Community.