Between January 2013 and September 2015, the Los Angeles City Attorney's Office sent letters to individuals who had just purchased a handgun reminding them of their legal responsibilities as gun owners. This report evaluates the effect of the letters sent by the Los Angeles City Attorney's Office on city-level rates of homicide, robbery, and aggravated assault with a firearm and conducts a cost-benefit assessment of this letter program. 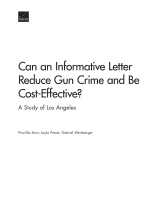 Can an Informative Letter Reduce Gun Crime and Be Cost-Effective?

A Study of Los Angeles

In 2007, the Los Angeles City Attorney's Office implemented a pilot study of a gun letter intervention to deter straw purchases and other illegal transfers of firearms, and to increase reporting of lost or stolen firearms. The intervention involved sending a letter to handgun purchasers during their ten-day waiting periods between purchase and taking possession of the firearm, which advised the purchaser that the new weapon was registered to them and that failure to properly record any transfer or loss of the weapon with California's Department of Justice could result in the owners' liability for any future misuse of the gun. A pilot randomized controlled trial of the letter program was conducted in two neighborhoods of the city of Los Angeles from May 2007 to September 2008.

Five years after the pilot study, the letter program was fully implemented citywide from January 1, 2013, through September 1, 2015. Letters were sent to all handgun purchasers residing in city of Los Angeles zip codes during the ten-day waiting period. Our study expanded on the pilot study, using two statistical approaches to assess the effect on firearm violence.

This report evaluates the effect of the letters sent by the Los Angeles City Attorney's Office on city-level rates of homicide, robbery, and aggravated assault with a firearm and conducts a cost-benefit assessment of this letter program.

The research reported here was conducted by the Justice Policy Program within RAND Justice, Infrastructure, and Environment.