This report offers an initial exploration of the concept of climate restoration — that is, approaches that seek to return atmospheric concentrations of greenhouse gases to preindustrial levels within one to two generations. Authors explore the conditions under which it might be possible to achieve various climate restoration goals. This report also examines near-term actions that might help manage associated risks. 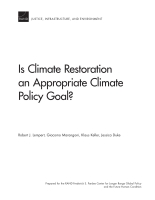