Between 2000 and 2011, younger veterans were more likely to be unemployed than younger non-veterans. This difference falls rapidly with age and time. The evidence supports the hypothesis that veteran unemployment reflects engagement in job search. There is little evidence that veterans are disadvantaged in the labor market. Limiting benefits to veterans might reduce the length of unemployment spells, but the budgetary effect is unclear. 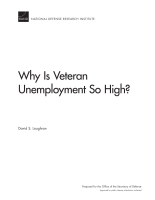 Why Is Veteran Unemployment So High?

According to official statistics, the unemployment rate of young military veterans ages 18-24 reached 29 percent in 2011. This report seeks to put that statistic in perspective by examining the historical time-series of veteran unemployment, comparing the veteran unemployment rate to that of non-veterans, and examining how veteran unemployment varies with time since military separation. Between 2000 and 2011, younger veterans were, on average, 3.4 percentage points more likely to be unemployed than similarly situated younger non-veterans. However, this difference between veteran and non-veteran unemployment falls rapidly with age and time since military separation. The report concludes that the best available evidence supports the hypothesis that relatively high rates of veteran unemployment reflect the fact that veterans, especially younger veterans, are more likely to have recently separated from a job — namely, military service — and, consequently, are more likely to be engaged in job search, which takes time, especially during periods of slow economic growth. The available evidence lends little support to the hypothesis that veterans are inherently disadvantaged in the civilian labor market. Limiting unemployment benefits available to recently separated veterans would likely reduce the length of unemployment spells, but the net effect of such a policy action on the long-term federal budget is unclear. There is very limited evidence on the effectiveness of other federal policies aimed at facilitating the transition of veterans into the civilian labor market.