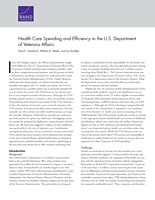 Health Care Spending and Efficiency in the U.S. Department of Veterans Affairs

by David I. Auerbach, William B. Weeks, Ian Brantley

In its 2013 budget request, the Obama administration sought $140 billion for the U.S. Department of Veterans Affairs (VA), 54 percent of which would provide mandatory benefits, such as direct compensation and pensions, and 40 percent of which is discretionary spending, earmarked for medical benefits under the Veterans Health Administration (VHA). Unlike Medicare, which provides financing for care when its beneficiaries use providers throughout the U.S. health care system, the VHA is a government-run, parallel system that is primarily intended for care provision of veterans. The VHA hires its own doctors and has its own hospital network infrastructure. Although the VHA provides quality services to veterans, it does not preclude veterans from utilizing other forms of care outside of the VHA network — in fact, the majority of veterans' care is received external to the VHA because of location and other system limitations. Veterans typically use other private and public health insurance coverage (for example, Medicare, Medicaid) for external care, and many use both systems in a given year (dual use). Overlapping system use creates the potential for duplicative, uncoordinated, and inefficient use. The authors find some suggestive evidence of such inefficient use, particularly in the area of inpatient care. Coordination management and quality of care received by veterans across both VHA and private sector systems can be optimized (for example, in the area of mental illness, which benefits from an integrated approach across multiple providers and sectors), capitalizing on the best that each system has to offer, without increasing costs.

Data Suggest That There Could Be Room for Coordination and Improvement in Rationalization of Care Across the Veterans Health Administration (VHA) and the Rest of the U.S. Health Care System

This research was conducted in RAND Health, a division of the RAND Corporation.