The 2018 National Defense Strategy called on the U.S. Department of Defense to turn its attention to confronting capabilities that challenge U.S. forces in future conflicts. This report summarizes early thinking and analysis about how the Air Force might employ a force of "attritable"—low-cost and reusable—unmanned aerial vehicles (UAVs) and what effects such a force might achieve in the most demanding conventional warfighting scenarios. 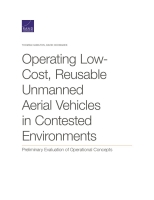 There are disquieting trends in the military balance of power. Both Russia and China are fielding military capabilities and postures that, in wartime, would make it extremely challenging for U.S. forces to project power and defeat large-scale aggression. The 2018 National Defense Strategy called on the U.S. Department of Defense to turn priority attention to developing innovative capabilities and concepts for confronting these challenges.

The U.S. Air Force has increased its efforts to explore the demands of warfare in highly contested environments, and is devising and evaluating new approaches to defeating aggression in those environments. One intriguing approach is to employ large numbers of relatively low-cost, attritable—reusable, and ultimately expendable—unmanned aerial vehicles (UAVs) to perform a variety of tasks in support of joint force defensive campaigns. This could allow land-based forces to generate and sustain airpower without relying on fixed base infrastructure, such as runways and maintenance facilities. The implications of such an approach for the resiliency of forward-based forces and for their effectiveness in the opening days of a conflict could be profound.

The authors of this report summarize early thinking and analysis about how the U.S. Air Force might employ such a force, and what effects it might achieve in the most-demanding conventional warfighting scenarios.

This research was commissioned by the United States Air Force and conducted by RAND Project AIR FORCE.