The study reported here focused on the flexibility that California granted counties in implementing constitutionally mandated and legislatively created public safety realignment — in particular, whether counties continued and expanded existing county corrections practices or used realignment as an opportunity to change from "business as usual." 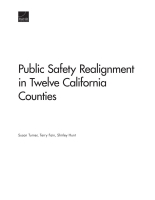 Following long bouts of litigation among inmates, prison guards, and state officials, in May 2011, the U.S. Supreme Court affirmed the ruling of a three-judge panel that imposed a cap on California's prison population and ordered the state to reduce its prison population to 137.5 percent of "design capacity" within two years. The primary basis for the court ruling was that the overcrowded prison system violated inmates' constitutional right to adequate health care. In response to the 2011 Supreme Court decision, California adopted two measures, Assembly Bill (AB) 109 and AB 117, collectively known as realignment. These measures shift responsibility for certain low-level offenders, parole violators, and parolees, previously the state's responsibility, to California counties. Realignment gives counties a great deal of flexibility in how they treat these offenders and allows them to choose alternatives to custody for realignment offenders. As time has passed since realignment began in October 2011, several studies have evaluated various aspects of the planning and implementation of realignment. The study reported here focused on the flexibility that the state granted counties in implementing realignment. In particular, the authors wanted to determine whether counties essentially continued and expanded what they were already doing in county corrections or whether they used realignment as an opportunity to change from "business as usual."

There Is Evidence of Movement Toward Colocating Service Provision

The research reported here was conducted in the Safety and Justice Program, part of RAND Justice, Infrastructure, and Environment.