This report presents an evaluation of a Los Angeles County Department of Mental Health campaign with the Los Angeles Dodgers in 2020 and 2021 that focuses on the prevention of and early intervention for mental health challenges—an effort specifically aimed at the team's extensive Hispanic fan base. This group is a key county demographic with attitudes toward mental illness that sometimes differ from those of other ethnic groups. 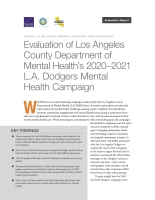 WhyWeRise is a social marketing campaign conducted by the Los Angeles County Department of Mental Health (LACDMH) to promote community engagement with mental health issues along a continuum from self-care to professional treatment services, reduce barriers to care, and increase awareness of how to seek mental health care. In 2020 and 2021, LACDMH partnered with the Los Angeles Dodgers to expand the reach of the campaign to the Major League Baseball team's audience and spread the WhyWeRise messages to the Dodgers' extensive Hispanic fan base—a key county demographic with attitudes toward mental illness that sometimes differ from those of other ethnic groups. The LACDMH/Dodgers campaign focused on awareness of resources and stigma-reduction among Hispanic county residents. This report builds on prior RAND work and provides an evaluation of the reach of the 2020 and 2021 Dodgers campaign overall and a focus on the reach and potential impact of outreach to attendees of 2021 Dodger games.

The majority of individuals reached by the campaign found it beneficial, in that it made them feel supported and that their mental health was important

This research was funded by CalMHSA and carried out within the Access and Delivery Program in RAND Health Care.