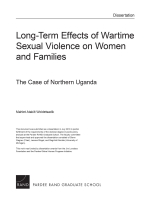 Long-Term Effects of Wartime Sexual Violence on Women and Families

The Case of Northern Uganda

Wartime sexual violence is one of the most devastating forms of violence committed against women and girls during armed conflicts. It is used as a tool of war to systematically target vulnerable groups, incite displacement, inflict suffering, and sever community cohesion. Research has shown that it has catastrophic effects on the health and well-being of survivors. However, there is a dearth of evidence on its long-term effects on survivors and their personal networks. In northern Uganda — a region that was marred by protracted conflict for 20 years — about 30 percent of women report having experienced at least one form of conflict-related sexual violence, including forced marriage, rape, and forced pregnancy. The objectives of this dissertation were to study the enduring effects of wartime sexual violence on Ugandan women and explore its ripple effects on families.

In-depth interviews were conducted to: (a) assess survivors' perception of the persisting effects of wartime sexual violence on their health, relationships, and care seeking behaviors; and (b) explore how the indirect exposure to wartime sexual violence affected parents, siblings, and intimate partners. The relationship between women's exposure to conflict events and their experience of intimate partner violence was explored using data from a nationally representative survey.

Findings show that women survivors continue to suffer from unresolved and untreated trauma, lack access to mental health care, and face economic hardships due to community stigma and customary laws that prevent women from owning land. Family members were susceptible to secondary traumatic stress, and both survivors and family members used coping mechanisms, such as memory repression and faith. Relationships were often disrupted after survivors disclosed their experiences or if they had children born of wartime rape. Intimate partner violence was found to be generally high among Ugandan women, but significant differences in prevalence rates were not observed for women living in war-affected regions versus those in unaffected areas.

Recommendations for policy and practice include providing trauma-informed care within existing community support mechanisms; working with religious leaders to address inequities around land inheritance; and supporting survivor-led initiatives, including reintegration of children born of wartime rape through family reunions.

This document was submitted as a dissertation in July 2018 in partial fulfillment of the requirements of the doctoral degree in public policy analysis at the RAND Pardee Graduate School. The faculty committee that supervised and approved the dissertation consisted of Glenn Wagner (Chair), Jeanne Ringel, and Ragnhild Nordås (University of Michigan).