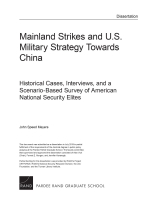 The growth of Chinese military power has generated a far-ranging debate in the United States about how the American military should adapt itself for the future. A key axis in this debate concerns the willingness of a future U.S. president and his advisors to recommend mainland strikes — conventional strikes on the Chinese mainland during wartime. Some strategists believe that this course of action is likely, perhaps inevitable, should war occur. Another group of strategists argues that an American president would likely not authorize such a move against the homeland of another nuclear-armed power. Both camps make different recommendations for American military force planning based on their conflicting assumptions.

This dissertation wades into the middle of this debate. Careful theorizing and systematic research can help adjudicate the arguments found in this disagreement. Towards that end, this dissertation presents three complementary research approaches focused on investigating the willingness of an American president and his advisors to authorize mainland strikes. First, historical research complemented with material from presidential archives enabled this project to investigate the parallels between the bombing campaigns in the Korean War and the Vietnam War and a hypothetical U.S.-China war. Second, twenty interviews with American national security elites analyzed the decision-making frameworks they employed to assess the desirability of mainland strikes in potential conflicts. Finally, an online scenario-based survey experiment with eighty-five national security elites tested the effect of different scenario characteristics and respondent backgrounds on the likelihood of mainland strikes in a Taiwan-related scenario.

This document was submitted as a dissertation in July 2019 in partial fulfillment of the requirements of the doctoral degree in public policy analysis at the Pardee RAND Graduate School. The faculty committee that supervised and approved the dissertation consisted of Alan Vick (Chair), Forrest E. Morgan, and Jennifer Kavanagh.