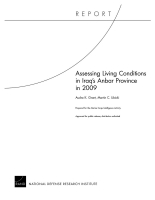 The local population is the center of gravity in counterinsurgency, and the first step toward winning the population is to understand it. To acquire more knowledge regarding the lives of the people in Iraq's Anbar Province, once one of the most violent areas in the country, RAND carried out surveys of living conditions in the province in 2008 and 2009, conducting face-to-face interviews with a random sample of 1,200 heads of Anbari households. This report summarizes the findings of the May–June 2009 survey.

Building on a 2004 survey developed by the United Nations Development Programme and the 2008 RAND instrument, the 2009 survey included questions about security and the effects of war, public infrastructure, demographics, employment, income and standards of living, education, and housing. The findings reveal that many improvements have occurred since 2004 and 2008. However, the data also expose both the extent to which Anbari households have suffered from the effects of war and the lack of improvement in certain areas (notably, public infrastructure). The results should foster greater understanding of current conditions in al-Anbar and help identify areas on which to focus future assistance.

The research described in this report was prepared for the Office of the Secretary of Defense (OSD). The research was conducted in the RAND National Defense Research Institute, a federally funded research and development center sponsored by OSD, the Joint Staff, the Unified Combatant Commands, the Department of the Navy, the Marine Corps, the defense agencies, and the defense Intelligence Community.