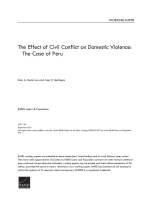 The Effect of Civil Conflict on Domestic Violence

The Case of Peru

We study the effect of women's exposure to civil conflict violent events during childhood and early teenage years on the probability that they will experience domestic violence in their marriages as adults. In particular, we investigate the case of the internal conflict in Peru during the 1980s and early 1990s, and its effect on the incidence of domestic violence between 2004 and 2012. We find that female exposure to conflict violence increases their later risk of being a perpetrator and a victim of domestic violence. The average effects for women affected by the conflict are small, although they mask important heterogeneities as some regions were affected by the conflict more severely than others. The effects are substantial for women in the highest categories of exposure. We also find evidence that a potential mechanism through which exposure to the conflict affects domestic violence in the long-term is normalization of the use of violence. Women more exposed to conflict violent events are more likely to justify the use of violence against women and more likely to stay in a violent relationship.

This research was conducted by RAND Labor and Population.