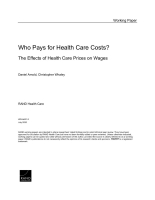 Who Pays for Health Care Costs?

The Effects of Health Care Prices on Wages

Over 150 million Americans receive health insurance benefits from an employer as a form of compensation. In recent years, health care costs have grown rapidly, raising concerns that increased health care spending crowds-out wage increases. We leverage geographic variation in health care price growth caused by changes in hospital market structure, and in particular, mergers, to test the impact of health care prices on wages and benefit design. We find that hospital mergers lead to a $521 increase in hospital prices, a $579 increase in hospital spending among the privately insured population and a similar, $638 reduction in wages. Both the hospital price and spending increases and the reduction in wages are driven by mergers that occur within hospital markets, rather than cross-market hospital mergers. Our results imply that consumers bear the price effects of hospital mergers in the form of reduced wages. We also find evidence of changes in benefit design structure and adoption of high-deductible health plans. Overall, our results show how rising health care costs caused by provider concentration are passed to workers in the form of lower wages and less generous benefits.

This research was funded by Arnold Ventures, the National Institute for Health Care Management, and NIA K01AG061274 and conducted by RAND Health Care.