RAND Contributions to the Development of Computing 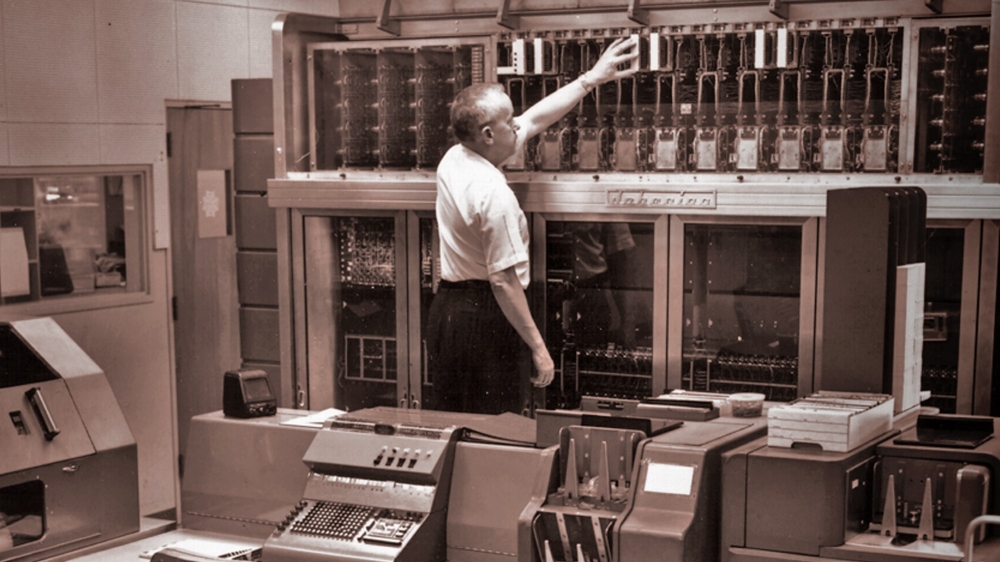 Project RAND has a historic record of achievement in the development of computing: RAND staff designed and built one of the earliest computers, developed an early online, interactive, terminal-based computer system, and invented the telecommunications technique that has become the basis for modern computer networks.

Project RAND was also the first to exploit new mathematical and computational techniques to solve Air Force problems and was a force behind the introduction of computing to the Air Force at all levels. RAND staff members served as advisors throughout the 1950s and 1960s, as the Air Force absorbed computer technology into its structure. They helped establish the career path for computer specialists, participated in the Scientific Advisory Board, designed the curriculum and taught courses for the DoD Computer Institute, and participated in formal study groups and committees sponsored by the Air Staff. In all these interactions, Project RAND helped the Air Force make the transition to computer maturity and supplied it with computer-based analytic methodology and software.

From its inception, RAND research was heavily quantitative, and calculating aids were in great demand. Project RAND acquired a Reeves Electronic Analog Computer in 1948 for missile and orbital simulations and promptly made a number of engineering improvements that were adopted by the industry of the time. Calculations for early studies were done on punched-card "electric accounting machines." Early models did only simple arithmetic, generally only a few operations per card; later models could be "programmed" by making electrical connections among the parts through wiring on removable plugboards. RAND pressured IBM for many years to produce improved equipment, which eventually could do many tens of operations per card. Innovative RAND programmers created large and complex plugboards in a continuing effort to create more elaborate computational environments.

Demand for random numbers in support of modeling studies prompted construction of a special electronic mechanism to generate them. This work became the well-known A Million Random Digits with 100,000 Normal Deviates, published in 1955, whose tables have become a standard reference in engineering and econometrics textbooks even to this day.

Efficient calculation of mathematical functions was a trying problem. Cecil Hastings' Numerical Approximations for Digital Computers was a major contribution in this area. It has been estimated that this research saved enough machine time and memory (measured in dollar value) to have financed Project RAND for 15 years.

The Move to Electronic Digital Machines

The demand for solutions to complex analytic studies outstripped the computing power of the time. In 1949, a RAND team (John Williams, Bill Gunning, and George Brown) visited major potential vendors of electronic computers to assess future possibilities for electronic computers. One of them described the state of the art as "dismal"; another wrote in the trip report that "they were all doing tweaky things."

So RAND decided to build its own computer. It was one of five organizations in the country that decided to piggy-back on the work of John von Neumann, whose project at the Institute for Advanced Study, Princeton, N.J., was building the first parallel scientific computer. With Air Force funding, a team of RAND engineers (led by Gunning) started building the machine in the basement of the building at 4th and Broadway in Santa Monica. The new computer, named JOHNNIAC after von Neumann, first became operational in early 1953 and stimulated a necessary surge of system software development to make the machine efficient and convenient for users.

With the JOHNNIAC, every detail of data flow, every step in program logic, managing memory allocation, and handling input-output actions had to be conceived and programmed for each problem. Memory was always in short supply; machines were never fast enough; magnetic drums were always too small. Such problems led to innovative software development and tricks, as well as ingenious mathematical algorithms.

At the same time, a commercial industry was beginning to emerge. In late 1953, RAND installed an IBM 701 (serial number 11). It came with rudimentary programming support tools, such as an assembler and a library. However, since the concept of an operating system had not yet evolved, the programmer would have hands-on possession of the machine for a specified period of time. At the end of the assigned time slot, a printout (memory dump) and perhaps a card deck would be the basis for examination of the program's behavior. If the run crashed, a special camera arrangement could take a Polaroid picture of the display lights on the console.

The evolving demands of analytic studies and the potential of new computer technology led to a variety of innovative applications in software and mathematical algorithms. Among the most important RAND contributions were linear programming for optimization problems (George Dantzig) and the associated Simplex method of computation, dynamic programming (Dick Bellman) and its software; later, the so-called Information Processing Languages (developed by Al Newell, Cliff Shaw, and Herb Simon), which became the basis for subsequent artificial intelligence and expert-system software; and SIMSCRIPT, a language for simulation and modeling developed by Harry Markowitz, who left RAND to form his own software company. Two of RAND's analysts in this area—Herb Simon and Harry Markowitz—went on to become Nobel Laureates.

Commercial machines were evolving so rapidly that it was economically unrealistic to upgrade the JOHNNIAC. However, that machine continued to be the basis of engineering advances, such as the first commercially produced magnetic-core memory; the first 140-column-wide, high-speed impact printer; and a swapping drum to support multiple users. The JOHNNIAC also supported the development phase of the Tablet, the first operational digitizing surface by which freehand movements of a pen could be digitally entered into a computer.

Milestones for the Information Revolution

Of particular importance was the JOHNNIAC Open Shop System (JOSS). Developed by Cliff Shaw, JOSS-1 was a very early online, time-shared computer system for individual users. It led the state of the art by allowing tens of users to work at the same time on one machine. By the mid-1960s, several Air Force installations had terminals linked via telephone connections to the JOSS-2 in Santa Monica.

The single Project RAND study with the most lasting and widest technological impact was Paul Baran's work on the concept of "distributed communications"—now known as packet switching. Developed in the mid-1960s in response to an Air Force requirement for communications able to survive a nuclear attack, this work defined the concept underlying modern data networks—from international to local-area networks. In particular, packet switching is the communication protocol for the Internet and the Ethernet.

By the time JOHNNIAC was finally retired in 1966, a large commercial industry had evolved with extensive software for every machine, and RAND shifted entirely to commercial sources. UNIX systems became the choice for computer science research, and the concept of electronic messaging evolved. RAND computer scientists perceived the requirement for a comprehensive mail system and, over a weekend in 1979, demonstrated the principles of what became the RAND-MH message-handling system. This system became the model for other commercial mail systems and is a part of current UNIX software distributions.

Also in the 1970s, PAF conducted a major computer-resource management study to advise the Air Force on charting its long-term course for the acquisition, management, and operation of its computers, software, information systems, and related personnel. Staff members advised on then-innovative digital avionics and supported Air Force managers on acquisition of modern computer-intensive aircraft. In the 1980s, PAF continued its computer-science work with the development of programming languages tailored especially to battlefield and other military simulations, and incorporating both rule-based and object-oriented constructs—such languages as SWIRL, TWIRL, and ROSS.

By the 1990s, computer science under PAF sponsorship had given way to direct involvement with Air Force-specific issues, such as the security of information systems, the vulnerability of such systems to deliberate electronic attack, and the possibility of applying "expert systems" as decision support in Air Force support and administrative functions.

Excerpted from RAND and the Information Evolution: A History in Essays and Vignettes »