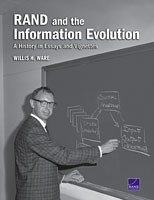 RAND and the Information Evolution

A History in Essays and Vignettes

This professional memoir describes RAND's contributions to the evolution of computer science, particularly during the first decades following World War II, when digital computers succeeded slide rules, mechanical desk calculators, electric accounting machines, and analog computers. RAND's accomplishments included important advances not only in hardware and software but also in analytic techniques that exploited the speed and power of computers. From the beginning, RAND researchers were focused on using computers to improve applied studies that addressed complex, real-world problems. They also addressed the problem of infusing computing capability into an organization and helped to define the emerging profession of computer science. This memoir includes photographs and vignettes that reveal the collegial, creative, and often playful spirit in which the groundbreaking research was conducted at RAND.

Funding for the publication of this document was provided through a generous gift from Paul Baran, an alumnus of RAND, and support from RAND via its philanthropic donors and income from operations.