The Dynamics of the Hostage Situation at Amenas 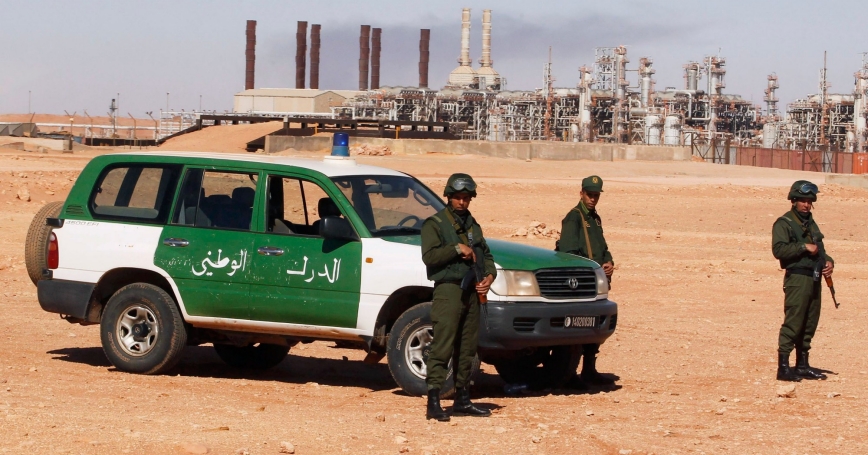 Algerian soldiers stand near the Tiguentourine Gas Plant in In Amenas, 994 miles southeast of Algiers, January 2013

Second in a three-part series of observations in the aftermath of the Amenas terrorist attack in Algeria. Read part 1 and part 3.

In the 1970s, hostage situations accounted for about 20 percent of all terrorist incidents. Terrorists kidnapped government officials, diplomats, and corporate executives; hijacked airliners; and seized and barricaded themselves with hostages to obtain publicity, ransom, the release of imprisoned comrades, publication of their manifestos, and changes in government policy.

Embassies were popular targets. Governments responded to the terrorist threat by increasing security and adopting no-concession policies. Unwilling to yield to terrorist demands, yet unable to stand idly by while hostages were murdered, governments became more willing to end hostage episodes with armed assaults, despite the risks. As they became more difficult to carry out, less likely to result in concessions, and more likely to end in the terrorists' capture or death, embassy takeovers declined, although kidnappings continued. Terrorists moved on to large-scale bombings.

Algeria was anxious to avoid a lengthy siege.

Algeria was unlikely to negotiate with the Amenas attackers. Nor would the United States be willing to release two convicted terrorists (Omar Abdel-Rahman and Aafia Siddiqui), as the attackers demanded. The terrorists might have been persuaded to accept a large cash ransom in lieu of their initial demands, but that could have involved lengthy negotiations, during which more hostages might die or the huge Amenas facility might have been sabotaged, threatening even more casualties. Delay also would allow the terrorists to find more hostages who were hiding throughout the site and prepare their defenses, ensuring a still bloodier denouement if negotiations failed.

The Japanese government reportedly asked the Algerian government to take no action that would imperil the hostages. Other governments requested that they be informed before any assault. Despite these pleas, it was Algeria's decision to make, and it chose to respond without delay despite the risks to the hostages. Attempting to coordinate a response that would be acceptable to all of the nations concerned would guarantee a lengthy siege. The 1980 terrorist seizure of diplomats from 15 nations at the Dominican Republic's embassy in Bogota, Colombia, lasted for two months. The 1996 terrorist takeover of a multinational assembly of diplomats at the Japanese ambassador's residence in Lima, Peru, went on for 114 days. Efforts to free American, British, Irish, and other hostages held by terrorist kidnappers in Lebanon in the 1980s and 1990s went on for more than five years.

The fate of hostages is seldom the only factor considered.

Bargaining for human life is a tactical matter, although one with profound philosophical implications. But hostage situations also create political crises that bring in other issues. Case studies of past hostage incidents reveal complex decisionmaking influenced by factors far beyond the fate of the hostages.

Facing international criticism as a brutal military dictatorship, Brazil's generals saw the 1969 kidnapping of the American ambassador as an opportunity to make a humanitarian gesture. They yielded to the abductors' demands for the release of 15 prisoners, thereby showing that political prisoners in Brazil were not being killed or tortured.

Governments often see a hostage situation as an opportunity to demonstrate strength. President Teddy Roosevelt saw the 1904 kidnapping of Ion Perdicaris, the U.S. consul general in Tangier, by Mulay Hamid el Raisuli, a renowned Moroccan warlord, as a challenge to his own political future. The abduction came just before the Republican National Convention at which Roosevelt, who became president when McKinley was assassinated, sought the party's nomination. His celebrated ultimatum, “This government wants Perdicaris alive or Raisuli dead,” was read aloud at the convention and appealed to delegates and voters. Roosevelt gained the nomination and won the election. Behind the bluster, Perdicaris—who, it turns out, was not an American citizen—was released because the United States sought help from other governments to pressure Morocco's sultan to give in to Raisuli's demands.

Heads of governments have learned that protracted hostage episodes can be politically dangerous. Many attribute President Carter's defeat in the 1980 election to his inability to rescue or negotiate the release of the American hostages in Tehran. And President Reagan's administration received a near mortal blow when it was revealed that the U.S. government, despite a strict no-concessions policy, had been secretly selling arms to Iran to gain the release of American hostages in Lebanon—and using the profits to fund Nicaraguan rebels.

No stranger to hostage negotiations, Algeria's President Abdelaziz Bouteflika, as the country's foreign minister in 1975, helped broker the deal that provided a large ransom for the release of Saudi Arabia's and Iran's oil ministers who had been taken hostage by the notorious terrorist Carlos. Bouteflika's objectives in the current crisis were different.

Algeria's secular government fought a long and bloody civil war with Islamist rebels in the 1990s that resulted in the deaths of more than 100,000 people. The Islamists were defeated, but the irreconcilables continued to fight on as members of the Groupe Salafiste pour la Prédication et le Combat (GSPC), which in 2007 affiliated itself with al Qaeda to become AQIM, whose credentials the attackers at Amenas claimed.

Looking at the turmoil in Libya following Qaddafi's removal; the overthrow of governments in Tunisia, Egypt, and Yemen; and Syria's ongoing civil war, it is easy to see why the Algerian government would view any manifestation of an Islamist resurgence as a threat that had to be promptly crushed. There would be no negotiations, no lengthy international crisis, no concessions. Algeria would not tolerate on its territory a new terrorist stronghold like those in Pakistan and Afghanistan—a “Sahelistan,” as Algeria's prime minister put it.

Armed rescues are dangerous for hostages.

Numbered Lives, a RAND analysis of hostage situations published many years ago, showed that hostages could be killed during the initial moments of their abduction, murdered in cold blood by their captors, killed while attempting to escape, or killed during an attempted rescue. Of these four possibilities, rescues proved to be the most dangerous: 79 percent of the hostages who died in hostage incidents were killed during a rescue operation, either by their captors or by their rescuers.

This does not mean that they would not otherwise have died. It simply means that armed rescues entail high risk, especially when a large number of attackers are holed up in a large, complex facility. The armed rescue that ended the hostage siege at a school in Beslan, Russia, where Chechen terrorists held more than 1,100 hostages (most of them children), left 380 dead. And 129 hostages died in the rescue of 850 hostages held by terrorists at a theater in Moscow. More than 800 workers, including 130 foreign nationals, were at the Amenas site when terrorists struck. By the end of the assault, an estimated 37 were dead.

There has been no account of how the hostages died. As in previous hostage episodes, eyewitnesses at Amenas report that some—at least five, possibly more—were killed in the first moments of the takeover. Witnesses said that some were shot attempting to flee, and others were murdered in cold blood. Algerian authorities have claimed that “numerous dead hostages had been killed with a bullet to the head.”

Were the hostages doomed from the start?

An armed rescue that ends in many hostage casualties invariably prompts a debate about the government's decision. Could more hostages have been saved through negotiations, or were they doomed from the start?

We will never know. Post-incident claims cannot be trusted. Mokhtar Belmokhtar has an established record of kidnapping foreigners who come within his reach, and negotiators who have dealt with him point out that he has reliably released his hostages upon payment. But one cannot extrapolate from ransom kidnappings a likely outcome of incidents like that at Amenas. The killing there began immediately, making it more difficult for the authorities to agree to a deal.

Moreover, barricade-and-hostage incidents in which the hostage-takers are themselves quickly surrounded have a different dynamic. The large size of the attacking force at Amenas meant that the terrorists would not easily be worn down in negotiations, and there are always some hostage-takers who are determined to kill regardless of any negotiations. Shootouts are more likely.

The hostage-takers, who called themselves the “Signed in Blood” battalion, came to Amenas ready to die and therefore prepared to kill. They strapped explosives around the necks and waists of some of the hostages. They herded their captives toward the central gas plant, which they reportedly intended to destroy. These were not promising signs for a negotiated settlement.

The hostage-takers who were reportedly captured should be able to tell us more about their intentions, including whether they had an escape plan or were on a suicide mission. But we must depend on the Algerian authorities to reveal what they learn.