This essay examines a number of issues concerning the status of al Qaeda more than ten years after 9/11, including whether America has won the operational battle but lost the ideological contest; whether homegrown terrorism is a growing threat; whether maintaining American troops in Afghanistan is essential; and whether the United States ought to declare on its own an end to the war on al Qaeda. 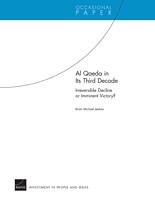 Al Qaeda in Its Third Decade

More than ten years after 9/11, there is still remarkable lack of consensus among analysts' assessments of al Qaeda's current condition and future capabilities. Almost every issue is debated: Whether America has won the operational battle but lost the ideological contest; whether homegrown terrorism is a growing threat; whether maintaining American troops in Afghanistan is essential; whether the United States ought to declare on its own an end to the war on al Qaeda. Part of the debate is driven by political agendas, but the arguments derive from the fact that al Qaeda is many things at once and must be viewed in all of its various dimensions. This essay examines a number of these issues in light of recent developments — the death of Osama bin Laden, the Arab Spring, and the American withdrawal from Iraq. In each case, it drives toward a bottom line. In the final analysis, it is a personal view.

The Situation in Afghanistan

This Occasional Paper results from the RAND Corporation's continuing program of self-initiated research. Support for such research is provided, in part, by the generosity of RAND's donors and by the fees earned on client-funded research.