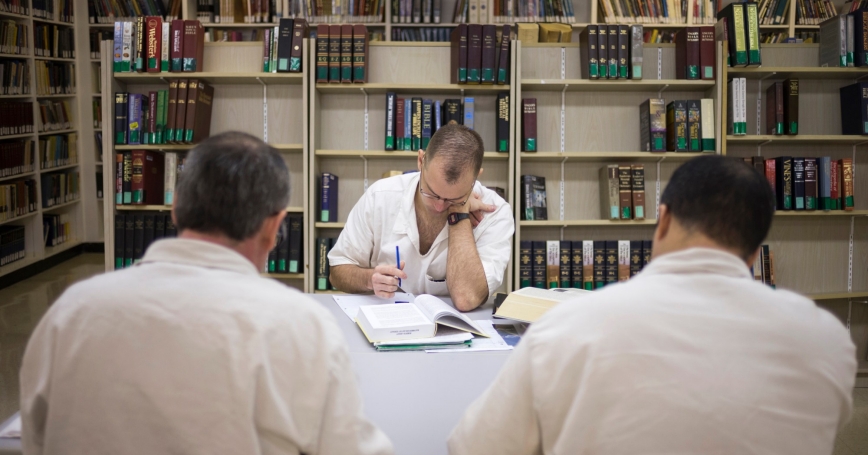 Offenders study inside the Southwestern Baptist Theological Seminary library located in the Darrington Unit of the Texas Department of Criminal Justice men's prison in Rosharon, Texas

According to the Department of Justice, in 2012, Alabama had the third highest imprisonment rate in the United States, trailing only Louisiana and Mississippi. A fierce debate has erupted over what to do to reduce overcrowding in Alabama prisons at a time when the state's budget is tighter than ever. The possibility of federal take over has been discussed.

Across the United States 700,000 individuals leave state and federal prisons every year. Within three years about 40 percent of them are back behind bars, imposing a crushing burden on already strained correctional system budgets. According to a recent National Academy of Sciences report, state spending on corrections is the third highest category of general fund expenditures in most states today, ranked only behind Medicaid and education.

As a result of the 2008 economic recession there are fewer opportunities today for prisoners to participate in effective rehabilitation programs. But what if there were a way to reduce recidivism at a fraction of the cost of incarceration? Well, there is.

Providing education and vocational training to inmates is a cost effective way to reduce recidivism rates and thus shrink prison populations and ease the strain on prison budgets. Education is far less expensive than incarceration. Our study at RAND found that every dollar spent on correctional education programs saves taxpayers, on average, five dollars. And this is a conservative estimate that counts only direct costs. It does not take into account collateral savings like reducing the strain on the criminal justice system and financial and emotion costs borne by crime victims.

We also found that participation in education programs reduces an inmate's risk of recidivism whether he or she participates in post-secondary and college courses, remedial education, GED preparation, or vocational education. Prisoners who take advantage of education programs have a reincarceration rate 13 percentage points lower than those who do not.

This is not just because inmates who seek education while incarcerated tend to be those with greater ability and motivation. We accounted for that possibility by looking at the most rigorous studies—those that focused on inmates who were required to take part in education programs and those that made sure inmates in both treatment and comparison groups had similar risk factors for reincarceration.

And keeping released inmates from returning to prison has other benefits for society that flow from crime reduction. For cash strapped states, which includes pretty much all of them, correctional education is a smart investment.

But the idea of spending state money to help educate inmates has run into opposition from critics who argue that the money could be better spent and that providing education to inmates is a luxury. Earlier this year, New York Gov. Andrew M. Cuomo was rebuffed by state legislators when he proposed a plan to use public money to provide college-level education at 10 state prisons. Yet the idea is working in at least 16 other states where funding has been made available for college education behind bars.

Contrary to the arguments of detractors, prison education does not waste money, it saves it by shrinking prison populations. At the same time education can ease the burden on law enforcement and the judicial system as educated prisoners find jobs and give up their criminal ways.

Kim Thomas, commissioner of the Alabama Department of Corrections, was correct when he told an audience recently that the state has "an obligation to provide opportunities for people to improve their lives, and that takes dollars." Education and training is good place to invest.

The argument that states should not be spending public money to improve the lot of those who have committed crimes fails to consider the cost savings and the societal benefits of rehabilitating past offenders. States would be wise to look at the bigger picture and develop education programs to break the cycle of recidivism, reduce mass incarceration and save money.

Lois Davis is a senior policy researcher at the RAND Corp. and the author of "Understanding the Public Health Implications of Prisoner Reentry in California: Phase I Report."

This commentary originally appeared on AL.com on September 30, 2014. Commentary gives RAND researchers a platform to convey insights based on their professional expertise and often on their peer-reviewed research and analysis.