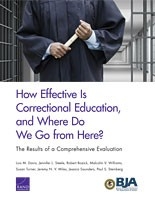 How Effective Is Correctional Education, and Where Do We Go from Here?

The Results of a Comprehensive Evaluation

Does not include Appendix C.

The research described in this report was sponsored by the Bureau of Justice Assistance and was conducted in the Safety and Justice Program, within RAND Justice, Infrastructure, and Environment.