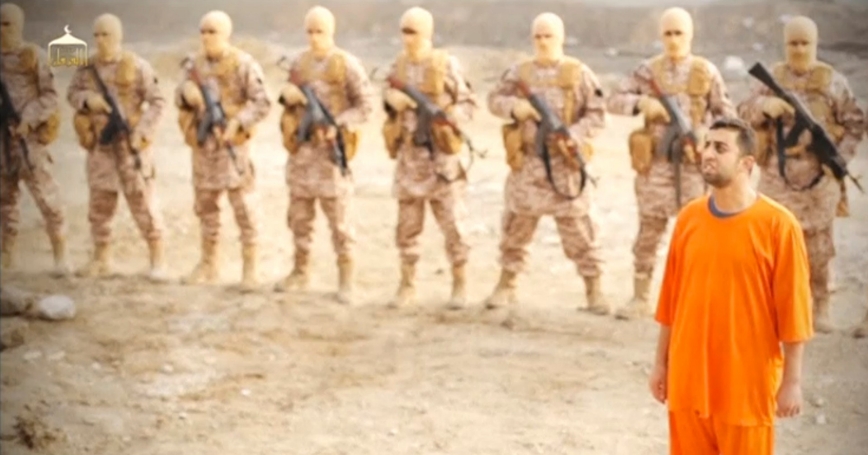 A man purported to be ISIS captive Muath al-Kasaesbeh in front of armed men in a still image from an undated video filmed in an undisclosed location, made available on social media on February 3, 2015

The gruesome execution comes roughly one month after individuals associated with al Qaeda in the Arabian Peninsula seized international attention with a deadly attack on the Paris offices of satirical magazine Charlie Hebdo. Thus, al-Kasaesbeh's death could be the latest display of “theater” in a “fierce competition” between ISIS and al Qaeda for leadership of the global jihadist movement.

Al-Kasaesbeh was burned alive, not beheaded like past ISIS prisoners. Why the shift in the method of execution?

Brian Michael Jenkins: I can't recall a single incident in modern terrorism where terrorists deliberately killed a hostage with fire. There's no religious basis for it this side of 17th-century witch burning. The sole purpose is terror. It will enrage some in Islam.

Jonah Blank: Notably, there's at least one specific prohibition of death by fire in the ahadith literature, the texts that stand second only to the Quran:

Some Zanadiqa (atheists) were brought to 'Ali and he burnt them. The news of this event, reached Ibn 'Abbas who said, "If I had been in his place, I would not have burnt them, as Allah's Apostle forbade it, saying, 'Do not punish anybody with Allah's punishment (fire).'”

According to this hadith, Muhammad specifically forbade burning as an instrument of execution or torture on the grounds that it resembled hellfire. Thus, those using fire in this way are setting themselves up as God: the worst possible crime in Islam. (Incidentally, this is the line of argument Saudi Arabia appears to have used in condemning ISIS for burning al-Kasaesbeh.)

Instead of the Quran or the ahadith literature, the militants may be drawing on the writings of Ibn Taymiyyah. The fountainhead of much current jihadi reinterpretation of longstanding Islamic orthodoxy, Ibn Taymiyyah wrote more than half a millennium after the death of the Prophet. His writing is in no way part of the Islamic canon.

Writing when Mongol invaders had just wiped out the Abbasid caliphate, Ibn Taymiyyah sees them as having cynically converted to Islam to legitimize their rule. In this context, he preached the doctrine of takfir (excommunication of apostates), the idea that a true Muslim can declare another Muslim to be a non-Muslim.

Ibn Taymiyyah used this to declare the Mongol rulers illegitimate and call on all Muslims to rise up against them. Modern-day takfiris make similar pronouncements against rulers deemed too moderate, or against private citizens practicing a form of Islam the takfiris dislike.

Ibn Taymiyyah has been cited as authorizing the burning of apostates, as well as other non-canonical punishments. I interpret this as suggesting that any act is permitted if it is truly in defense of Islam. But there's no evidence that he or his immediate followers actually set their opponents on fire.

Howard Shatz: What Jonah mentions would be consistent with ISIS's modus operandi: find an obscure example from early Islamic history or a ruling that no else agrees with and say to your followers, “See? We know more. We are more pure.”

Andrew Liepman: I wonder how much more evidence we need to confirm that ISIS is acting outside the norms of Islam. It seems that everyone from mainstream clerics to the most militant supporters of al Qaeda have denounced this.

Benjamin Bahney: As Andrew indicates, the issue of religious justification for burning may be secondary. But it's noteworthy that ISIS chose a seemingly escalatory way of killing al-Kasaesbeh, a Jordanian, versus the captives of other coalition members.

What does this mean for Jordan? How might they respond?

Bahney: Jordan has responded quickly, executing two prisoners before dawn today, including Sajida al Rishawi, the failed female suicide bomber. As of yesterday, some news outlets were reporting that Jordan would execute six prisoners, so there could be more to come.

There are important tribal dynamics at play here. Al-Kasaesbeh is from an "important" tribe in the North. Reciprocal executions could trigger tribal tensions, depending on which prisoners Jordan decides to dispense with.

My sense is that ISIS never intended to make a deal to swap prisoners with Jordan. They may have used this episode to deliberately discredit the Jordanian government and inflame sectarian tensions in Jordan. While it's not clear yet when al-Kasaesbeh's execution actually occurred, it's clear to me that the negotiations between ISIS and Jordan were never serious and were meant to heighten media attention to this incident.

Jenkins: The execution will provoke calls for revenge among Jordanians, especially those of al-Kasaesbeh's tribe, who also happen to be strong supporters of the king. But other Jordanians will displace culpability to the United States and the Jordanian government for provoking this killing by joining the American-led coalition against ISIS. If Jordan escalates in response, these divisions will sharpen. Jordan and the entire coalition are fragile.

Dalia Dassa Kaye: I agree with Brian. The domestic pressure that mounted when the ISIS campaign began escalated with al-Kasaesbeh's capture. It's not likely to dissipate once the initial anger and horror over his execution passes.

The fissures within Jordanian society are serious. Domestic critics will continue asking why King Abdullah seems more concerned with cooperating with the Americans than with delivering better services to his own people.

I think the idea that this brutal execution will galvanize new resolve from Jordan and regional partners in the anti-ISIS coalition may be short-lived. Just because public anger at ISIS is likely to grow after this atrocity doesn't mean there isn't still tremendous resentment toward the United States and its military interventions in the region.

What does this mean for ISIS?

Liepman: Some commentators have suggested that this is a huge mistake for ISIS. I don't think ISIS cares. (That also applies to the people ISIS is appealing to.) Most of the world already loathes them. I don't think al-Kasaesbeh's execution changes the ratio.

ISIS is narrowing the appeal of its brand to a narrow slice of a small minority. This will eventually contribute to its undoing as an “emirate” and will reinforce the ranks of its adversaries. But it will also, as Jonah suggested, continue to appeal to potentially millions of people—not on religious grounds, but on some other, more basic, Sunni, anti-Western, anti-Shia, anti-Semitic grounds.

Jenkins: Is this action the result of strategic calculation, or miscalculation by ISIS, or evidence of a sort of collective madness resulting from ISIS's exaltation of savagery and recruitment of those attracted not by religious or ideological fervor, but rather by unlimited violence? ISIS carried out this murder in a deliberately horrific way, then deliberately publicized it. What objective does this calculated savagery serve? I agree with Andrew: It will undoubtedly revolt many in the Islamic community, but for ISIS that is no problem.

ISIS has publicized its brutality to attract the most determined and inevitably those most prone to violence. These recruits now comprise a large portion of the total number of fighters, enough to begin to change the character of the organization. The brutalization, through self-selection of volunteers and continued fighting, produces a subculture in which the norms of violence are skewed, allowing—even commanding—ever-greater acts of violence.

Blank: Brian raises a very interesting point: Perhaps ISIS is deliberately ignoring Islamic norms, precisely so it can attract violent killers like the British executioner featured in several of its beheading videos. For recruits like these, issues of theology are virtually meaningless.