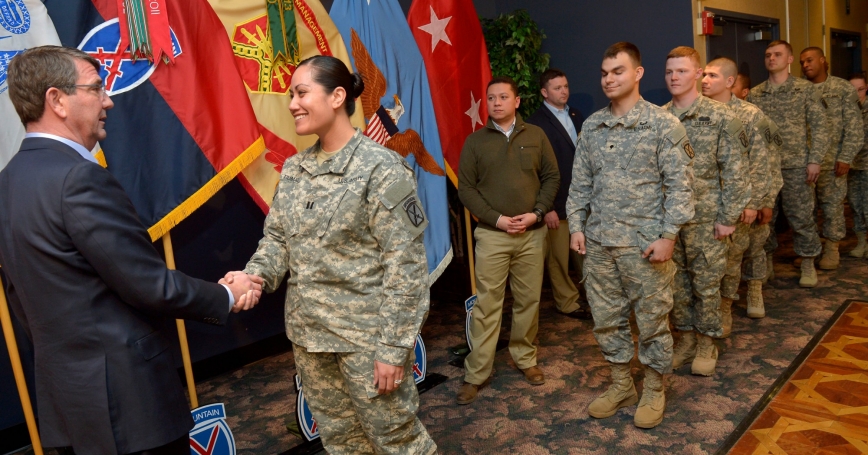 by Peter Schirmer and Dwight Phillips

Defense Secretary Ashton Carter is calling for significant change to the laws and policies that govern all military personnel management. This “Force of the Future” initiative may mean far-reaching changes in how military personnel are recruited, evaluated, assigned, promoted, retained, separated and compensated.

Designing new personnel systems is like painting landscapes of mountains: they may provide great detail, showing every rock and tree, or they may be vague and aspirational, veiled in clouds and mist. Either way, they can help orient senior defense leadership toward an objective. What is needed here and now is a map that shows potential paths to reach the objective.

One of the key portions of these broader changes is the imperative of “changing DOPMA.” To clarify the task at hand, it would be more accurate for people to say they aim to change the DOPMA System. The actual legislation, called the Defense Officer Personnel Management Act of 1980 (DOPMA) applies largely to active duty officers, who comprise just a portion of the total force. Many aspects of officer personnel management date back to the end of World War II or earlier; other major legislation passed since 1980 has affected officer management.

Meanwhile, much of enlisted personnel management is governed by policy, rather than law. And civilian personnel management has its own set of laws and policies. DOPMA (in the narrow sense) only erected the modern scaffolding upon which the officer management system is built. For convenience, we can refer to the modern day combination of laws, policies, incentives, history, and culture as the DOPMA System, but the important word is System, not DOPMA. Changing the system is a far bigger task than simply rewriting the law.

In less than two years there will be a new president, a new administration, and probably an entirely new set of civilian leaders within the Department of Defense, so we advise the current leadership to resist the urge to paint another picture of the distant mountains, and work on that map to get across the valley. In plain terms, there are lots of ideas out there about how to change elements of the DOPMA System, but few ideas about how to implement those changes. Ask a serving officer about career reform, and he or she will likely recall well-meaning personnel initiatives that did not last or did not produce the desired effects. So, the best course is to find and implement solutions that have the best chance of succeeding.

This may seem to be putting the cart before the horse. Shouldn't leaders first decide what they want to do and then decide how to do it? Well, it is possible to test promising ideas to see how they work in practice on a limited scale before imposing them on everyone in the system. If they work, they can be expanded, or complementary policies can be tested, until it is clearer how all the pieces fit together and what the outcomes will likely be.

This is a more-deliberate and gradual approach than changing everything at once. There's good reason for this. The DOPMA System is complex and has deep historical roots. All of its parts have to fit together in a coherent, manageable way that is not only consistent with service culture and individual expectations, but also meets the requirements of the force and the nation. This is why change is so difficult and why it tends to be incremental.

Even within one aspect of officer management, there are multiple alternatives, with second and third-order effects. That discussion is unfolding right now regarding military compensation and retirement. A defined benefit system exists today, but alternatives include changing to a defined contribution system, or a hybrid of the two, with all sorts of possibilities about when people would vest, what the government would contribute, how much the defined benefit would change, and so on. When there are so many alternatives regarding even this one aspect of this system, the idea of completely swapping out one system with another seems overwhelming.

Testing alternative personnel policies against select populations to learn whether those policies generate the desired results, and what second-order effects they cause is a worthy goal. An important aspect of demonstration projects, therefore, is research design and data collection, which must be established before the alternatives are put into place. How to “make people whole” in the event that an alternative is discontinued or judged unsuccessful matters, because careers and family livelihoods are at stake. Yet another aspect of demonstration projects is time: it will likely take several years before any discernable effects occur. Imagine, for example, if the military wanted to test an alternative that would extend mandatory retirement dates by five years. Obviously, it would take five years to know how many officers would take full advantage of that, and even then the evidence may not be conclusive once variables like the strength of the economy and force size changes are accounted for.

Options could be explored and assessed. Successful demonstration projects could lead to wider implementation and help build momentum for more reform. The value of this approach is that it would allow senior decision makers to adjust course as they gain a better understanding of the terrain between the current and future personnel management systems. A measured approach allows time for all the other variables—particularly service cultures—to adjust and allows services to design a system that works for them versus a one size fits all approach.

If defense leaders agree there is merit in pursuing this idea, they will have to be prepared to answer two inevitable questions from Congress: What do you want to do with this authority, and why? The immediate response probably would not need to be a group of fully planned, ready-to-launch demonstration projects, but it would need some rigor, some detail, with clear policies and objectives in mind. Getting all of this passed before a new administration takes over is a formidable challenge, but it can be done if people are committed to enabling change.

A decade ago, the RAND Corporation helped the Office of the Secretary of Defense develop legislative language to establish Title 10 demonstration project authority, and even developed specific demonstration projects that could answer those questions for Congress. Working with each service, RAND developed unique projects for select populations, appropriate to service needs, interests and culture. The legislation died in committee and it is possible the institutional memory for the ideas dissipated in the intervening years. But the overall approach is still attractive, whether or not the particular details of those proposed demonstration projects are viable and appropriate today.

There is plenty of work to be done to get this new authority approved and the demonstration projects up and running—plenty of pathfinder work to chart the institution's way forward toward real personnel management reform. But if the authority is granted, the next group of leaders may inherit from this one not another pretty picture of distant mountains, but something much more valuable: the beginnings of a map to get there.

Pete Schirmer is RAND's director for emerging policy research & methods. Lt. Col. Dwight “Buzz” Phillips is an Army strategist who recently completed his Ph.D at the University of Chicago: “Reengineering Institutional Culture and the American Way of War in the Post-Vietnam Army, 1968–1989.”

This commentary originally appeared on Breaking Defense on July 15, 2015. Commentary gives RAND researchers a platform to convey insights based on their professional expertise and often on their peer-reviewed research and analysis.