Bringing FARC in from the Cold 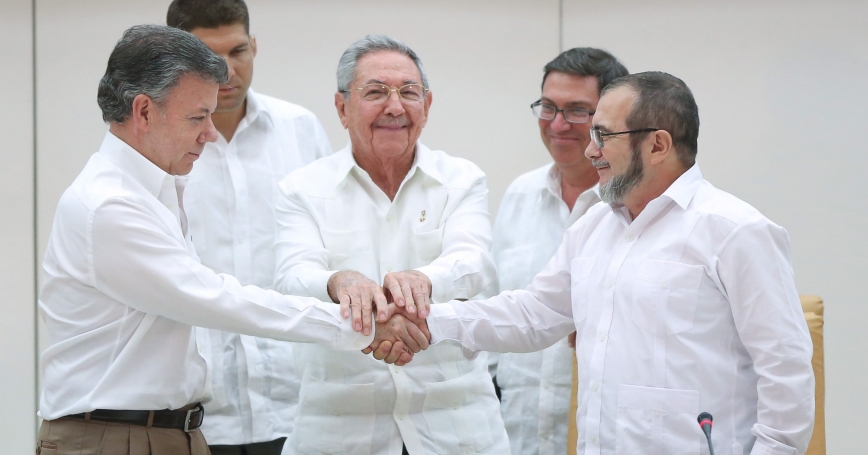 Despite the bitterness and bloodshed that insurgencies engender, they usually end through negotiations which often offer some form of amnesty, power sharing, and reintegration.

The Sept. 23 joint announcement of a preliminary peace accord by the Revolutionary Armed Forces of Colombia (FARC) and the Colombian government seems to fit that pattern. They committed themselves to reaching a final agreement within six months, to be approved via a national referendum. However, there has been no widespread outpouring of popular support for this process. Certain public opinion surveys show that the majority believes that the negotiations are on the wrong track, particularly regarding amnesty and power sharing.

Most Colombians manifest a strong desire for peace; but they reject the possibility that crimes committed in the name of revolution should receive amnesty. Under the rubric of “transitional justice,” the preliminary accord calls for special tribunals to investigate and punish both guerrillas and soldiers accused of crimes, to include murder, rape and kidnapping. Those who admit guilt will receive only a temporary “restriction of liberty” as opposed to long imprisonment. Specific conditions for the proposed “restriction” remain to be worked out and apparently will entail some form of house arrest with supervised freedom of movement. This leniency damages the credibility of the peace process in the eyes of many Colombians, as does the murky distinction between a politically motivated crime eligible for amnesty, versus a common crime deserving punishment. Under this vague criterion, drug trafficking to finance the FARC may be seen as a political crime and go unpunished.

Academics disagree on whether the best context for negotiated conflict resolution is a battlefield stalemate, as opposed to one side losing decisively. The FARC, which began fighting in the 1960s, won many victories in the past, expanding its control over extensive areas. Nonetheless, with U.S. assistance, the Colombian government fought back successfully, killing key rebel comandantes, while implementing an ambitious program to promote desertions. The FARC have been steadily losing armed strength and popular support for years. Although they remain a potent force, their strategic defeat probably contributed to the decision to negotiate.

FARC leaders, moreover, recognize that guerrilla war is increasingly seen by their fellow leftists throughout Latin America as anachronistic and counterproductive. Various leftist politicians, some openly espousing revolutionary change, have gained power through the ballot box, including former communist insurgents in El Salvador and Nicaragua. Although they have far less political support, the FARC leadership apparently seeks to emulate those examples. The preliminary accord calls for the creation of an undetermined number of congressional seats in FARC areas, as well as other measures facilitating the election of FARC candidates, to include protection against potential right wing assassination attempts. While these provisions resolve the critical power sharing issue, they promote anxiety among anti-communist Colombians. They fear that the revolutionaries will achieve through negotiations what they failed to achieve through force of arms. In contrast, Colombian president Juan Manuel Santos holds that it is better to have the rebels participate peacefully in politics, rather than continue a destructive war.

Regarding reintegration, preliminary plans for demobilizing guerrillas need to be finalized. The end of a guerrilla war may foster a surge of criminal activity as unemployed guerrillas and soldiers turn to crime for lack of viable economic alternatives. This occurred at the end of El Salvador's civil war in 1992, as demobilized guerrillas and soldiers contributed to the rise of powerful criminal gangs. In Colombia, apolitical criminal bands (BACRIM's) already attract some former FARC guerrillas, though the government seems to have been generally successful in its efforts to reintegrate deserters.

Unless the peace process creates concrete measures to deal with entire units of demobilized guerrillas, the BACRIMs may receive a new influx.

As the controversies over amnesty, power sharing and reintegration demonstrate, the preliminary peace accord has been divisive for Colombia. Apparently, it has been divisive for the FARC too. The FARC's regional fronts are not all under tight control and disagreements between local and national level leaders over the peace talks have become evident. War is a lucrative way of life for FARC comandantes; their revolutionary organization is also a criminal enterprise. If peace is established, these comandantes will not enjoy the same power and economic benefits they have now. Although a good number of them may genuinely want to stop fighting and reintegrate into Colombian society, an equal number are likely to ignore any final accord and continue to operate independently, conducting illicit economic activities, especially drug trafficking. Since the negotiations began three years ago, coca production has increased significantly, taking advantage of government concessions such as the suspension of aerial spraying. Prolonged peace talks may be a FARC ploy to regain momentum.

Despite its imperfections, particularly the leniency it promises wartime criminals, the agreement formally ending the war should represent an overall net gain for Colombia, even though it will not end all violence or crime.

Arturo Munoz is a senior political scientist at the nonprofit, nonpartisan RAND Corporation.

This commentary originally appeared on Foreign Policy Concepts on October 28, 2015. Commentary gives RAND researchers a platform to convey insights based on their professional expertise and often on their peer-reviewed research and analysis.