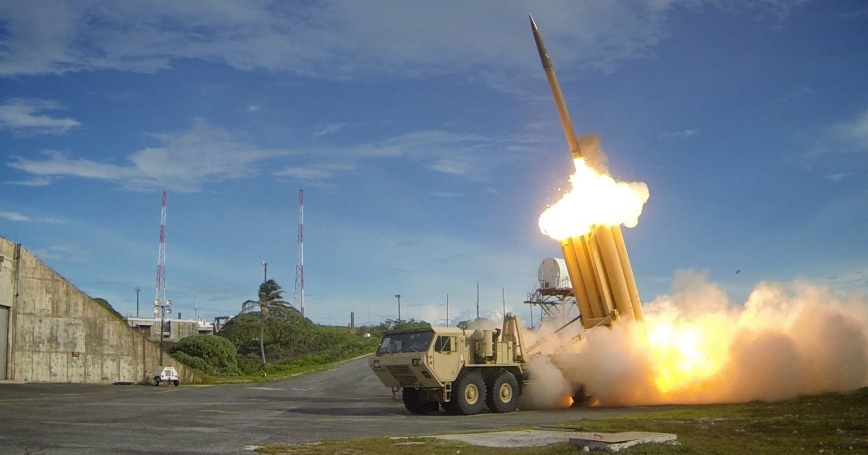 Photo by U.S. Department of Defense

In the aftermath of the North Korean nuclear weapon test in January and its satellite launch/ICBM test in February, the United States and South Korea announced that they would begin formal talks on deploying the Terminal High Altitude Area Defense (THAAD) in South Korea.

THAAD would join the existing U.S. and South Korean Patriot missile defenses that are intended primarily to stop short-range North Korean Scud missiles. THAAD is designed to intercept longer-range missiles like the North Korean NoDong that would be traveling at a much higher speed as they reenter the atmosphere. The NoDongs could well be the first missiles to carry North Korean nuclear weapons.

Thus far, the United States has acquired only five THAAD batteries. In order to maintain a rotation base in the United States required for training and personnel sustainment, it is difficult to deploy overseas more than one-third of the batteries in peacetime. Yet one battery has already been deployed on Guam. Once the sixth THAAD battery is acquired in 2016, a second overseas battery would be available for Korea.

South Korea does not possess the THAAD system and does not plan to deploy it. South Korea is focused on developing its own alternative to THAAD: the so-called long-range surface-to-air missile, or L-SAM, not due for deployment until after 2020.

Thus the discussion of deploying THAAD in South Korea is about deploying a U.S. THAAD battery with U.S. personnel, focused on defending U.S. forces in South Korea from North Korean nuclear weapon threats.

For many years, China and Russia have viewed the developing U.S. regional missile defense system as aimed at them, and have therefore opposed this system. They have refused to recognize the U.S./allied need to defend against the very large North Korean missile force despite North Korea's fiery threats of transforming South Korea, Japan, and the United States into a “sea of nuclear fire.” And they have seriously pressured South Korea not to join the U.S.-led missile defense system.

China has led this opposition. “When pursuing its own security, one country should not impair other's security interests,” Chinese Foreign Ministry spokesperson Hua Chunying said recently. “We believe that China's legitimate security concerns must be taken into account and a convincing explanation must be provided to China,” Chinese Foreign Minister Wang Yi added. The Chinese ambassador to South Korea, Qiu Guohong, sought to leverage the THAAD deployment by reportedly threatening that THAAD deployment “could destroy [China-South Korea] bilateral relations in an instant.” This and other Chinese threats have worried South Koreans, because China is South Korea's largest trading partner, carrying on more trade with the South than the United States and Japan combined.

But there are several inconsistencies in the Chinese position. Most notably, China often does not practice what it preaches. For example, it has provided no explanation to its neighbors regarding recent deployment of air/missile defense systems like the S-300 in the South China Sea or continued development and deployment of offensive missile systems like the DF-21 on the Chinese mainland.

China has also provided no convincing security rationale for its own objections to THAAD system deployment in South Korea. After all, the only Chinese offensive missiles that the THAAD missiles could intercept would be ones fired at Korea, and it would seem clear that Korea has the right to defend itself against such threats. In contrast, China's silence on Russian S-400 missile defense system deployments (or even South Korea production of offensive cruise missiles that can reach China) is puzzling. Some Chinese commentators raise concerns regarding the THAAD radar's range, which reaches well into China, but this is a modest addition to other observational means already deployed on satellites, aircraft, and ships.

More broadly, there are logical security arguments for China to favor THAAD deployment to South Korea. THAAD should enhance deterrence of North Korean provocations, including limited attacks, thereby helping to stop threats to regional instability from North Korea that China does not seek. Overall, China's objections appear to be motivated more by politics than meaningful military security concerns.

If China's objections are politically motivated, what political dynamics might be driving its behavior? One possible explanation lies in the political relationship between China and North Korea. China has been either unwilling (or more likely unable) to rein in its ally North Korea's growing nuclear and offensive missile threats. China has had substantial motivation to do so, including the concerns of Chinese citizens living near the North Korean border, who are threatened by North Korean nuclear weapon tests.

In contrast, the United States successfully convinced South Korea to stop its nuclear weapon program in the 1970s. Had the United States not done so, Northeast Asia would arguably be far less stable today. This contrast is no doubt a troubling one for China given its great power ambitions. In this context, strong objection to THAAD could be seen as a useful diversionary tactic, drawing attention from China's failures to meaningfully influence North Korean behavior.

It is hard to determine how China (or Russia) will respond to THAAD deployment in South Korea. China could continue its current course and rhetoric, perhaps punishing South Korea economically. Alternatively, THAAD deployment could change the dynamic and terms of the debate, leading to greater Chinese pressure on North Korea to curb its nuclear and missile threats. Regardless, South Korea and the United States need to do a better job of explaining their defensive resolve and rationale to the Chinese government and people. Chief among their many arguments should be the danger of allowing the North Korean nuclear weapons program to continue its unfettered growth.

This commentary originally appeared on The Cipher Brief on April 5, 2016. Commentary gives RAND researchers a platform to convey insights based on their professional expertise and often on their peer-reviewed research and analysis.