The Latest from the RAND Presidential Election Panel Survey 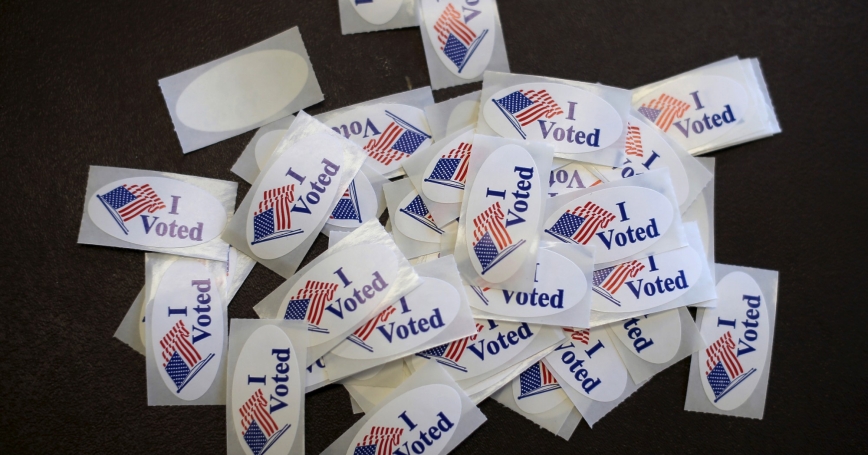 Stickers are displayed at a polling station for the Wisconsin presidential primary election in Milwaukee, Wisconsin, April 5, 2016

In our continuing series, RAND is conducting surveys leading up to the presidential election in November — the RAND Presidential Election Panel Survey (PEPS). In addition to asking people about their voting intentions, we're asking about their beliefs and opinions about some of the nation's most pressing issues, and how these opinions change over time. For complete details of the methodology behind the RAND PEPS, please refer to the methodology document. 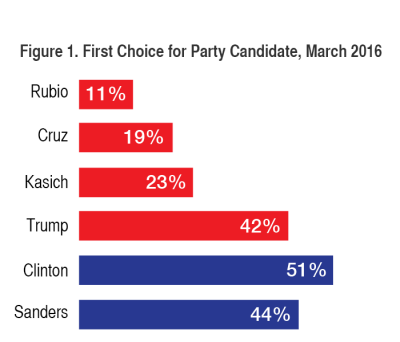 NOTE: Rubio suspended his campaign halfway through the survey period. Percentages do not add fully to 100 percent due to rounding.

We asked respondents who indicated that they intended to vote in a primary or caucus who their first choice for party's presidential nominee was. According to new RAND PEPS data, collected after Super Tuesday (2,398 respondents March 8–23), Donald Trump and Hillary Clinton remained frontrunners (see Figure 1). Trump leads the Republican field at 42 percent, but is now followed by Kasich at 23 percent and Cruz at 19 percent. Note that Marco Rubio suspended his campaign on March 16, approximately halfway through the survey period. While Cruz and Kasich are statistically equivalent here (within the margin of error of +/- 3.5 percent), Trump's lead does fall outside the margin of error. Clinton leads Sanders by seven points, 51 percent to 44 percent, although this also is (barely) within the margin of error. 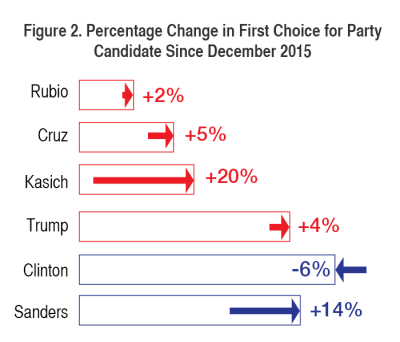 NOTE: Rubio suspended his campaign halfway through the survey period.

Comparing these rankings to our December results, we can see some sizeable shifts in positions (see Figure 2). Kasich in particular rose 20 points, from 3 percent support in December to 23 percent in March. Sanders also registered a significant increase of 14 points from December. Clinton's support, in contrast, fell significantly by 6 percentage points since December.

RAND PEPS follows the same individuals over time and enables us to track the flow of the support from one candidate to another. This flow is visualized using Sankey diagrams that capture changes over two periods of time, moving left to right.

Figure 3 presents the flow of support from and to Republican candidates Trump, Kasich, and Cruz between December and March. The left side of the figure shows support in December, and the right side shows support in March. The overall flow of support behind candidates in December to candidates in March are shown in the lines linking left to right.[1] (Note that the percent of support for a given candidate differs from those in Figures 1 and 2 in that the population here represents a share of the entire primary/caucus voter population, not just a share of the support from those primary/caucus voters of one party).

We can see that among the overall primary/caucus voter population, Trump increased his share of support from 11.1 percent to 12.3 percent, drawing mostly from former Ben Carson supporters. Support for Kasich grew from 1 percent to 6.7 percent by drawing largely from previously other/undecided voters, but also from former Cruz and Rubio supporters, suggesting relatively broader appeal. Cruz also increased his support from previously other/undecided voters as well as from former Carson supporters. 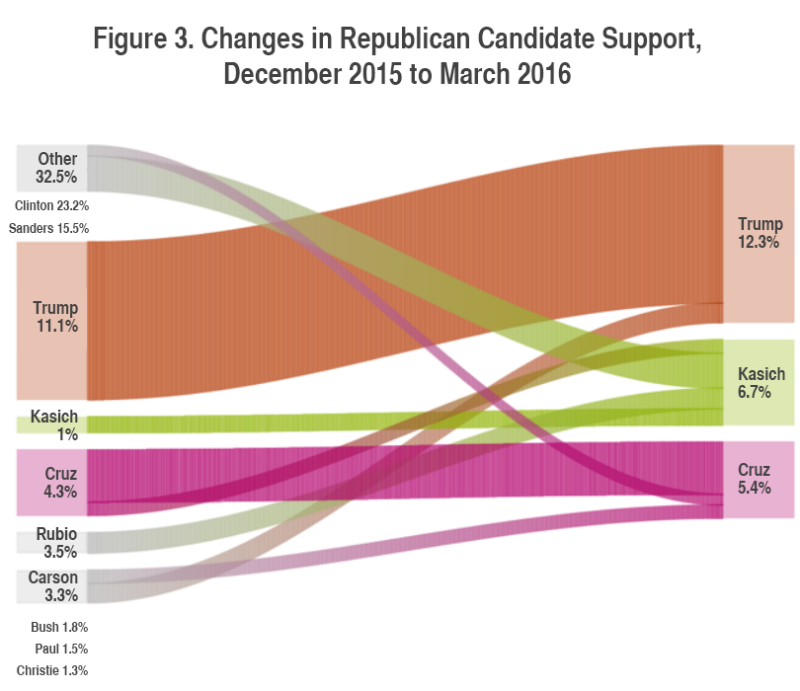 NOTE: We required that the net flow from one candidate to another must reach at least 0.5 percent of the total support for all candidates in order to appear in the diagram; tiny shifts are not represented.

Figure 4 presents the Sankey diagram for Democratic candidates.[2] The figure indicates that the net shift of former Clinton supporters to Sanders is the only notable trend among Democratic primary/caucus voters; Clinton did not pick up substantial support from previously undecided/other supporters, but neither did Sanders. 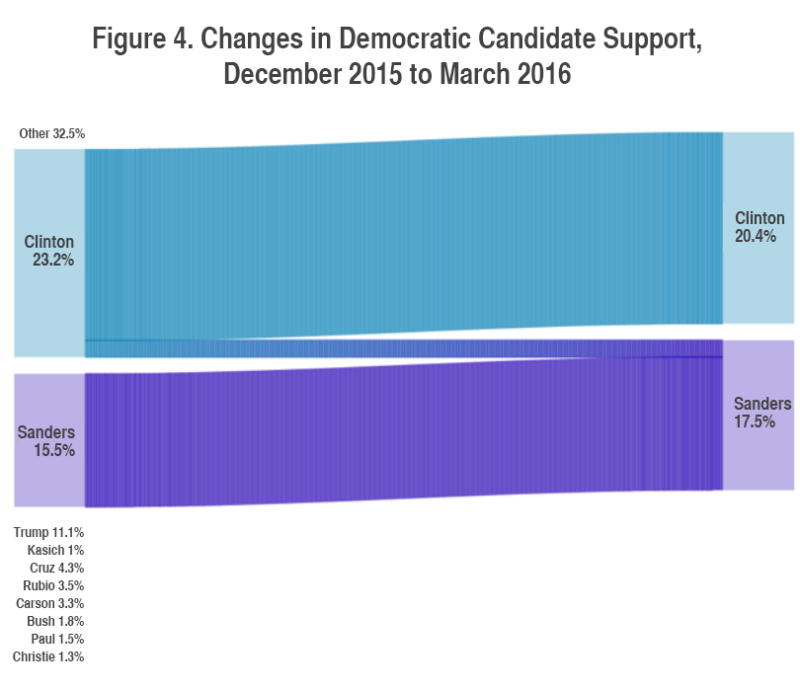 NOTE: We required that the net flow from one candidate to another must reach at least 0.5 percent of the total support for all candidates in order to appear in the diagram; tiny shifts are not represented.

In December, we asked respondents to place all candidates on an ideological spectrum, ranging from “very liberal” (1) to “very conservative” (5). In December, there was little significant variation between candidates as viewed by likely primary/caucus voters within their parties. Cruz was rated significantly more conservative than the other Republican candidates, but the other candidates themselves were statistically indistinguishable. Sanders was rated significantly more liberal than Clinton on the Democratic side.

We asked respondents to again place the candidates on the same ideological spectrum in March. Figure 5 presents the political spectrum ratings in March, while Figure 6 presents the shifts in positions. In March, individuals perceived Cruz to be significantly more conservative than they did in December, while they also perceived Trump to be significantly more moderate than they did in December. In total, this represents a doubling of the perceived distance between the two candidates (from 0.5 to 1.1 units on the scale). On the Democratic side, there is no significant change in how Sanders' political position is perceived, but Clinton has shifted significantly towards “moderate.” Clinton's perceived political shift is relatively small (0.3) but it does indicate that individuals are changing their perceptions of her ideology away from that of Sanders' – also widening the perceived political positions of the Democratic party candidates. For context, a political spectrum distance of 0.3 covered the perceived political range among the majority of the Republican candidates in December (except for Cruz and Carson). It is also interesting to note that likely Democratic primary/caucus voters have shifted their perceptions of their own political spectrum score (Self (D)) towards “moderate” in the same scale as they have for Clinton – 0.3 points towards the center, while not similarly moving Sanders' position. Republican voters (Self (R)), on the other hand, did not shift. Kasich, who was not asked about in the December surveys, currently falls closest to the average Republican primary/caucus voter's score. 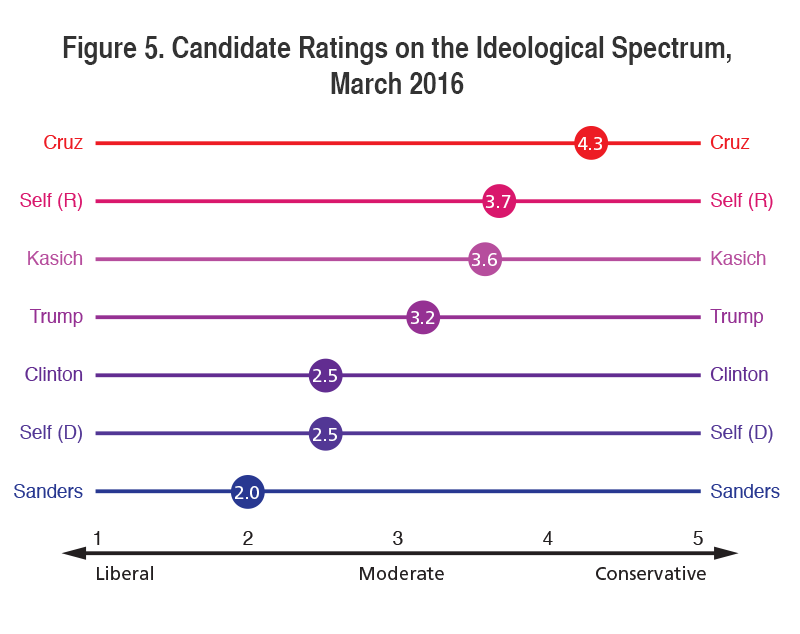 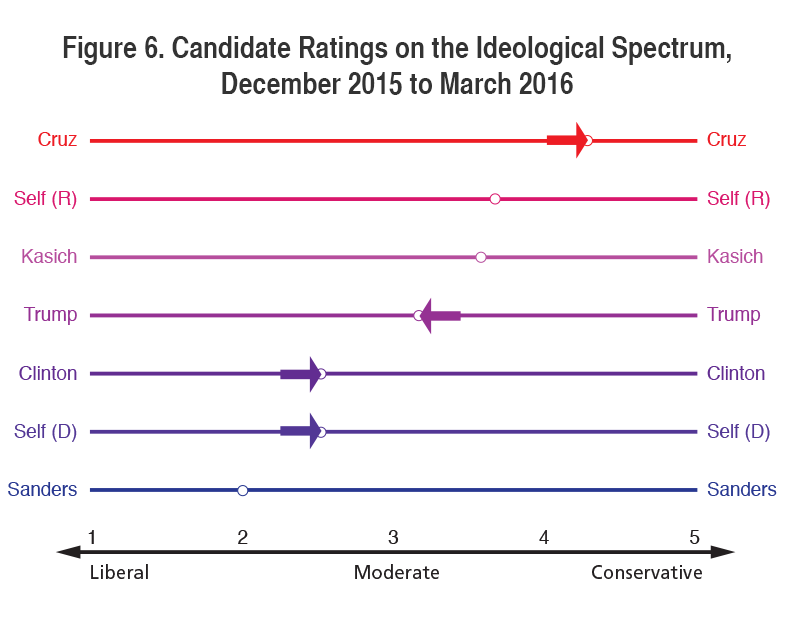 Attempts to gauge the outcome of a presidential election more than half a year out clearly need to be accompanied by disclaimers that such estimates are relatively weak predictors of eventual outcome. (Additional information about the methodology is available.) With that caveat, it is interesting to note that from our December baseline to the March survey, the gap between the percentage of voters choosing Republicans or Democrats has grown. Our previous survey results suggested that as of early January, 46.7 percent of voters would vote for a Democrat and 43.1 percent would vote for a Republican in the upcoming presidential election.[3] These results suggested a greater vote for the Democratic candidate. In March, our results indicate that 53.0 percent of voters will vote for a Democrat, and 37.9 percent will vote for a Republican in the upcoming presidential election, suggesting that the Democratic candidates are pulling ahead of the Republicans in the national vote.

Michael Pollard is a sociologist and Joshua Mendelsohn is a computational sociologist at the nonprofit, nonpartisan RAND Corporation.