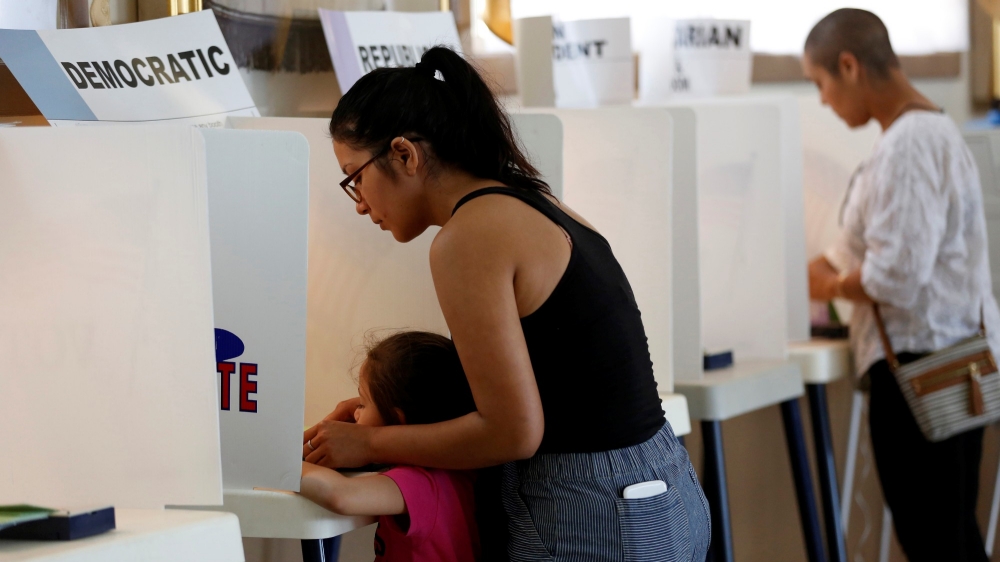 In April, the Washington Post published an article titled “The Coming Republican Demographic Disaster, in 1 Stunning Chart.”[1] It discusses one of the most notable trends in American politics over the past decade: Republican candidates do consistently worse with people of color, and the proportion of non-white voters in the American electorate is increasing. This could be bad news for the Republican party. If its candidates do not improve their appeal among non-white voters, their chances of winning future elections will decline sharply in the coming decades.

This example highlights a more general fact of electoral politics. Demographics—the personal and ideological characteristics of voters—matter. For example, Hillary Clinton polls very well with female voters,[2] while Donald Trump has a staggering lead among voters who hold a negative view of immigration.[3] However, no characteristic or belief accounts for 100 percent of a person's vote; all personal characteristics and beliefs play a part in shaping a person's choices. For example, among respondents who supported a candidate in the most recent wave of the RAND Presidential Election Panel Survey (PEPS),[4] women were more likely to support Democratic candidates. Even so, they had only a 60-percent chance of supporting a Democrat, not a 100-percent chance. Moreover, certain subgroups of women had a very high chance of supporting Republicans. For example, women who supported building a fence along the Mexican border had only a 26-percent chance of favoring a Democratic candidate. While demographics matter, no single category is enough to describe the complexity of a person—or that person's likely voting behavior.

While demographics matter, no single category is enough to describe the complexity of a person—or that person's likely voting behavior.

To understand the complexity involved, some social scientists use the metaphor of social space. In physical space, we define the position of objects in three dimensions. In social space, scientists make inferences about people based on the intersection of their various characteristics and beliefs, where each characteristic and belief is its own dimension. For example, Table 1 charts the chance that a respondent favored Ted Cruz in the March PEPS wave, given the person's highest educational degree and age. All values of 10 percent or more are shaded green. Based on this table, we could say that Cruz support was more likely in the right-side, middle region of the Age x Education space—that is, among voters ages 50 or above with moderate amounts of education.

In technically accurate terms, MDS finds a given number of eigenvectors of a given (normalized) high-dimensional space. In the case of PEPS data, MDS and eigenvectors provide us with a way to illustrate complex, multidimensional variables about people in a two-dimensional space. To visualize this concept, think of how we represent physical space on a map. We depict a city by showing two dimensions (north/south and east/west), but cities are clearly three-dimensional, with hills, valleys, skyscrapers, and underground infrastructure, for example. However, the first two dimensions give us more-useful information than the third (height). Because one would never find a city located on top of another city (Los Angeles cannot float over New York City), the third dimension is less valuable. Therefore, cities can be represented usefully on a two-dimensional map. Similarly, when the number of dimensions is much greater than three (as in our case of personal characteristics and beliefs), MDS combines dimensions, reducing those dimensions to only the most relevant and useful.

Despite the increasingly polarized tone of American politics, we find that most Americans actually answer similarly on most questions of political belief.

Phrased another way, MDS is kind of like averaging a person's coordinates in multiple dimensions of space, but letting some coordinates count more than others in a particularly clever way that reduces redundant information. For example, the x-axis could be the average of the person's education, income, and age, except that age is allowed to matter much more than the other two, because age provides information about both income (increases with age) and education (older generations were, on average, less educated).

We applied MDS to a wide array of items in the PEPS in order to create a two-dimensional social space that approximates the ideological terrain of the American electorate. For example, in the first two waves of the PEPS,[5] we asked the following question to garner respondents' attitudes about various topics:

We'd like to get your opinion on some issues that have been in the news recently. Do you favor or oppose each of the following?

Figure 1 divides the resulting social space into an 8x8 grid and estimates how many of America's 240 million adults fell into each square. In technical language, the x-axis and y-axis are the first and second eigenvectors, respectively, of a 31-dimensional social space derived from PEPS questions about political beliefs. In simplified language, the x-axis depicts an average of many personal characteristics and beliefs, and in that average, the most prominent factor is whether the respondent is liberal (left) or conservative (right). In the average of many personal characteristics and beliefs on the y-axis, the most prominent factor is the socioeconomic class of the respondent (top means richer and more educated[6]).

Despite the increasingly polarized tone of American politics, we find that most Americans actually answer similarly on most questions of political belief. In fact, we estimate that 19.6 million American adults (8.2 percent) fall into a single grid square (the bright red square), and another 94.9 million (40 percent) fall into the eight squares around it. That is nearly half of America situated in just 14 percent of the social space grid. Americans are therefore more ideologically similar than different.

Typically, American political beliefs are viewed as a single ideological spectrum that ranges from liberal to conservative. Figure 2 illustrates the relationship between liberal versus conservative self-identification across the same social space depicted in Figure 1. Whereas in Figure 1, color and shading correspond to the population size of the social spaces, in Figure 2, each square of the grid is colored according to whether the average respondent in that grid square identified as more conservative (red) or more liberal (blue). It suggests that the liberal-conservative spectrum is definitely one of the factors that defines American social space, but it is not the only one. To be precise, liberal-conservative self-rating predicts 50.4 percent of the variation in where respondents fell on the x-axis (left versus right) of this social space. If liberal versus conservative ideology was the only thing that mattered for respondents' political beliefs, the bottom-left corner would be a solid, consistent shade of blue; the top-right corner would be a solid, consistent shade of red; and the middle would be a solid, consistent shade of purple. Instead, both the x-axis and the y-axis represent a blend of political beliefs.

The liberal and conservative portions of the map differ in a significant way: The liberal population seems to have much stronger ideological agreement. The top five liberal-leaning squares on the grid account for just under 70 percent of people on liberal-leaning squares. In contrast, the top five conservative-leaning squares account for about half of people on such squares. This suggests that conservative-leaning Americans agree less on ideology. Consequently, Republican candidates would need to speak to a wider diversity of ideologies to curry the same number of supporters as Democratic candidates.

Republican candidates would need to speak to a wider diversity of ideologies to curry the same number of supporters as Democratic candidates.

In contrast, the y-axis does not strongly pertain to differences between liberal and conservative ideologies. Instead, it highlights a variety of issues that are not clearly polarized. There are many such issues, but differences between poor and rich and attitudes toward social groups outside one’s own are among the most salient. Respondents near the top of the figure tended to be highly educated and have higher household incomes. Respondents near the bottom tended to favor a set of policy issues that span the liberal-conservative spectrum—higher minimum wage, government-paid health care and college tuition, higher taxes on those making more than $200,000, and a fence along the Mexican border. While economists and politicians engage in vigorous debate over the actual economic effects of these policies, one could view them as reflecting ideas about how to improve the economic standing of working-class Americans—higher wages (higher minimum wage), lower personal debt (government-paid health care and college tuition), more wealth redistribution (higher taxes on the rich), and constraints on the supply of competing labor (immigration controls).

The two halves of the y-axis also tended to vary in how they felt about various societal groups. Respondents near the top held favorable opinions of Muslims, homosexuals, feminists, and illegal immigrants, while those near the bottom held negative views of those groups.

This piece is the first of a two-part series examining the ideological terrain on which candidates are competing for supporters. Stay tuned for part two, where we will discuss the implications of social space for the general election.