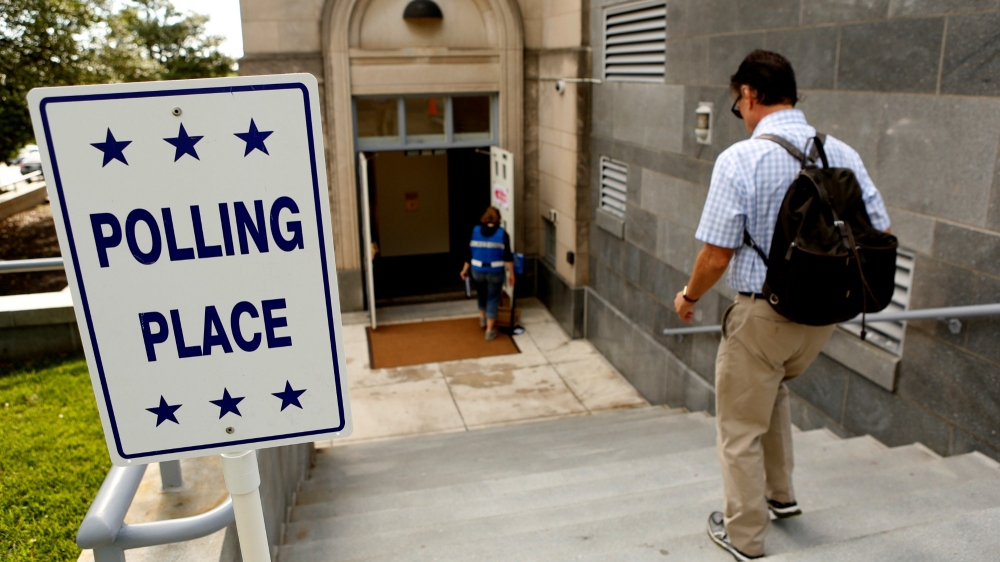 A man enters a polling station as voters take part in the final 2016 U.S. Democratic primary in Washington, DC

It appears fairly certain that Hillary Clinton will face Donald Trump in the general election. In part two of our two-part series, we use the concept of social space—how people are socially "closer" to or "farther" from each other in their beliefs and lived experiences—to examine Trump's and Clinton's respective territorial holds in America's political terrain. Part two builds directly on the ideas in part one, so we strongly recommend you read that first.[1]

As described more fully in part one, there is a family of mathematical techniques called multi-dimensional scaling (MDS). These techniques can be used to place people on a two-dimensional "map," such that people who are similar to each other are close together on the map, and people who are dissimilar from each other are far apart on the map. We constructed such a map based on 31 survey questions from the RAND Presidential Election Panel Survey (PEPS); to the extent that respondents gave the same answers to questions about their political beliefs, those people are close together on the map. We then broke that map into an 8x8 grid and estimated how much of the adult American population would likely fall into each square. By examining the typical beliefs and candidate support in each square, we hope to illuminate how well each candidate is positioned in America's ideological landscape.

Moving into the general election, each candidate faces the following five types of voters:

A candidate needs to unite supporters and in-party castaways to mount a strong challenge in the general election. That candidate can win big by luring out-party castaways away from the opponent or converting inactives into supporters. By understanding where each voter group lies in our map of America's ideological terrain, we can gain a sense of how Clinton and Trump might fare in the general election.

Figure 1 displays the territorial range of the four active voter groups in March 2016—back when both nominees still faced strong primary challengers. The coloring and numbering in each square indicate the approximate number of Americans who supported each candidate at the time.[4] The top panels show the territory of the presumptive nominees. The bottom panels show the territory of their primary challengers (Sanders for the Democrats and Ted Cruz, John Kasich, and Marco Rubio for the Republicans); voters in those squares are now considered in-party castaways. Darker panels indicate larger numbers of supporters or in-party castaways in that square.

Using the March 2016 data, Clinton's supporters could be found in most squares on the left side of the map, with particularly strong showings in the center left (top-left panel). Sanders supporters (i.e., Clinton's presumptive in-party castaways) occupied a narrower band of the map along the center of the left side (bottom-left panel). This may provide us with some clues about why Clinton maintained a steady lead over Sanders. Her campaign appears to have been able to attract supporters from a much broader range of the ideological map. This suggests that Clinton likely will succeed in uniting her supporters and in-party castaways, because the Clinton camp already encompasses the ideological terrain of the Sanders camp.

Incidentally, the Clinton/Sanders region of the map also contains the vast majority of inactives. If a substantial number of inactives decide to favor a candidate in the general election, the majority of them likely will favor Clinton.

Data suggest that Clinton likely will succeed in uniting her supporters and in-party castaways. Trump may face a more challenging situation.

Trump may face a more challenging situation (top-right panel). The Republican base is distributed over a larger area of the map, meaning that the Republican candidate needs to appeal to a more ideologically diverse set of voters to achieve the same number of supporters. This creates more opportunities for fissures to develop between wings of the party, and it may help explain the large number of Republican primary candidates. While Trump's territory overlaps somewhat with the combined territory of his former rivals, rival territory also covers parts of the map with very few Trump supporters (bottom-right panel). Trump support is stronger in the lower right, while Cruz, Kasich, and Rubio had more supporters in the upper right of the social space. Compared with Trump supporters in the lower right, PEPS respondents in the upper right tended to have higher family incomes, be more educated, and hold less-favorable opinions on redistribution issues, such as raising the minimum wage or increasing taxes on the wealthy. These respondents also tended to have more-favorable (or less-unfavorable) views of homosexuals, ethnic and religious minorities, and illegal immigrants. Trump may find difficulty unifying his lower-right supporters with upper-right castaways.

Taking the next step, Figure 2 colors each square according to the candidate with the most supporters in that square. The Republican challengers (Cruz, Kasich, and Rubio) are combined into one label, and if no party accounted for at least two-thirds of supporters in a square, that square is labeled as "divided." Squares with fewer than 1 million Americans are faded (appearing in a lighter shade of their respective colors).

Although Sanders supporters are the majority in the two left-most squares with 1 million or more Americans, Clinton otherwise shines as the most supported candidate across ideological liberal niches. In contrast, conservatives are evenly split between Trump (lower right) and the other Republicans (upper right). This may hint at why this Republican primary season has been so contentious. Trump's appeal reveals a clear fissure between different wings of the party.

The bright yellow outline highlights the five squares in the social space likely to be most contested in this election; these squares represent a combined 35.7 million Americans. Three are green ("divided") squares, indicating that no party's supporters constituted at least two-thirds of the square. The majorities in the other two squares supported Republicans other than Trump, and those respondents are as close to Clinton territory as to Trump's. Americans in these five squares share certain political and social beliefs with Trump supporters and others with Clinton supporters.

Trump's appeal reveals a clear fissure between different wings of the party.

The three upper contested squares (one green and two yellow) contain respondents who (on average) are conservative but fall about halfway in between Trump and Clinton territory in their feelings about minority groups and illegal immigration. These respondents also had very favorable opinions of Christians and Jews. Like supporters in the heart of Trump territory, they opposed gun control, as well as government-funded health care and college tuition. However, they are about equally likely to support or oppose a minimum wage increase and gay marriage. In terms of political parties, they have positive feelings about Republicans and slightly negative feelings about Democrats. These three squares represent 24.3 million supporters and castaways, as well as an additional 11 million inactives (not shown on the map)—a combined total of 15 percent of the U.S. adult population.

Both Clinton and Trump have some appeal and some challenges in competing for these contested areas of the map. While Donald Trump is strongly supported among Americans who hold vigorously negative views of illegal immigrants and Muslims, this issue carries little weight with the strain of Republicans in the upper contested squares. Trump's challenge will be to demonstrate traditional conservative credentials strongly enough to get these voters to the polls. Clinton is at a disadvantage with these voters, who strongly lean Republican. Her challenge will be to remind these voters of the party alienation they may be feeling with Trump as the presumptive nominee.

Clinton benefits from good chances at achieving party unity and a strong territorial hold on the most densely populated region of America's ideological terrain.

The two lower contested squares outlined in yellow contain respondents who (on average) are socially liberal but very opposed to illegal immigration. Like supporters in the heart of Trump territory, they support building a wall along the Mexican border and oppose providing a path to citizenship for illegal immigrants already in the United States. Like supporters in the heart of Clinton territory, these voters support government-funded health care and college tuition, an increase in the minimum wage, higher taxes on those making more than $200,000, and stronger legislation to combat climate change. In terms of political parties, they have mildly positive views of both parties, with Republicans coming off slightly better. These two squares represent 11.4 million Americans (about 4.5 percent of the U.S. adult population).

For the two lower contested squares, these low-income, low-education voters may find themselves ideologically split between a Trump-favoring, anti-immigrant sentiment and Clinton-favoring, economic progressiveness. Both camps may represent outgrowths of frustration with economic conditions in the United States and reflect theories of economic change—one leaning toward isolationism and the other favoring redistribution of wealth. The challenge for both candidates is to present their policies as the pathway to prosperity for this low-income, less-educated bloc of voters.

Taken together, parts one and two on mapping America's ideological terrain reveal a great deal about the American population and its implications for the general election. Part one reveals the political terrain. The population is somewhat ideologically polar, but most Americans generally have similar views on most issues. Americans' political beliefs do correspond somewhat to ideological differences between the main political parties, but they also correspond to wealth, education, and out-group attitudes that cut across party lines.[5] The Democrat-leaning segment of the population has more social group diversity, but the Republican-leaning segment has more ideological diversity.

Both parties are dealing with the aftermath of powerful primary insurgencies and the continuing reality of widespread discontent.

Part two charts the candidate battle lines. The Clinton campaign benefits from good chances at achieving party unity and a strong territorial hold on the most densely populated region of America's ideological terrain; however, a large population within its territory favors no one, which may weaken its prospects. The Trump campaign benefits from an unconventional battle line, drawing in both liberal and conservative voters through appeals to the more isolationist segments of the population, but it may have a territorial hold better suited to winning a primary fight than a general election.

If current polling trends hold steady, the 2016 presidential election may not be the closest of races.[6] Regardless, it will be one of the more thought-provoking elections, as both parties deal with the aftermath of powerful primary insurgencies and the continuing reality of widespread discontent. The primary elections highlighted deep instabilities in the traditional party alignments, and they may provoke some soul-searching among Americans whose partisan loyalties had previously held constant. The general election may smooth over these tensions, as primary opposition voters unite behind their party candidates, but it also could exacerbate them. By the 2018 midterms, we may need a new ideological map.