Crime and Terror in Europe: Where the Nexus Is Alive and Well 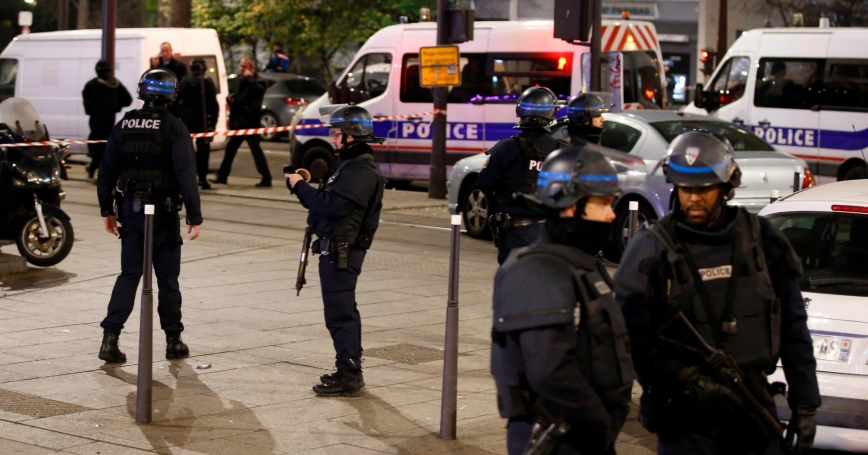 French police secure a street near a travel agency where a gunman took seven people hostage in a robbery, in Paris, France, December 2, 2016

Certain academic (PDF) and policy circles are engaged in an ongoing debate over the existence of what has been dubbed the “crime-terror nexus.” The term refers to the intersection of crime and terror, and the idea that a relationship between criminals and terrorists exists to the extent that a nexus has been established, although it can take one of several forms — temporary marriage of convenience, one-off encounter or lasting partnership.

Some scholars assert that the notion of such a nexus is overblown, while others suggest it is best to conceptualise crime and terrorism on a continuum (PDF), or sliding scale, where groups move back and forth over time, ebbing and flowing between ideological and profit motives.

And while healthy skepticism is necessary, especially when considering this nexus on a truly global level, it does appear to be a major threat (PDF) in one part of the world in particular — Europe, where terrorists and criminals now recruit from the same milieu (PDF).

The connection between crime and terror is not new.

When Edwin Bakker researched jihadi terrorists in Europe (PDF), he concluded that about a quarter of the terrorists sampled in the 2006 study had a criminal record. Many had committed crimes but had not served a sentence of any kind.

The so-called Islamic State (IS), more than any other group — including al Qaeda — has found a way to tap into the mind of the criminal-cum-terrorist who is on a mission to conduct jihad against the West and retains the capability to execute the logistical component of an attack, enabled in no small part by longstanding ties to the criminal underworld in Europe.

Many terrorists have been involved in various forms of criminality before becoming jihadists.

Many terrorists have been involved in various forms of criminality before becoming jihadists, including Abdelhamid Abaaoud, leader of the fall 2015 Paris attacks, and Ahmed Coulibaly, a key figure in the Charlie Hebdo attacks in Paris earlier that same year. Mohamed Lahouaiej Bouhlel, the terrorist who killed 84 people in July by driving a truck through a crowd on Bastille Day in Nice, France, also had a history of petty crime.

A more recent study by the Henry Jackson Society, focused strictly on IS, found that 22 percent of those linked to more than 30 IS-related plots in the West between July 2014 and August 2015 had a previous criminal record or contact with law enforcement. The most common felonies among the nearly 60 individuals were related to drugs.

Of 47 cases of jihadi-inspired violence carried out in the West (including Europe) between the beginning of 2012 and mid-2016, half of the attackers had a criminal past, terrorism expert Sam Mullins noted in analysis published in the CTC Sentinel, the journal of the Combating Terrorism Center at West Point.

The threat in Europe is more parochial in nature than in the Middle East, North Africa or South Asia. In some ways, it is perhaps less like an actual nexus and more like what some have called the “terrorist appropriation of criminal activities.” In a sense, it is do-it-yourself (DIY) organised crime. The nexus is more about groups like ETA, Hezbollah or Irish Republican Army offshoots working with traffickers and smugglers, while what we are seeing in Europe is the emergence of a true hybrid. There is also concern that Europeans returning from Syria could re-enter their countries of origin and again become involved in terrorism and organised crime.

European jihadis are the best positioned to take advantage of this trend, as many are former criminals who maintain connections to the illicit economy and both local and regional black markets. They have also been somewhat innovative in terms of financing their attacks. Terrorists have learned that small sums of money collected over time through somewhat banal criminal activities can be effective, even reliable, sources of funding. Funding through fraud (mortgage, credit card, value-added tax), petty theft, small-time armed robberies and loan defaults have provided monetary support for terrorist plots across Europe.

The second-most common method of funding was illicit trade, according to a Norwegian Defence Research Establishment report that analysed funding sources for 40 different jihadi cells involved in planning attacks against European targets. The illicit trade included drugs, cars, forged documents and weapons. The researchers suspected that proceeds from drug trafficking were used to fund various attacks across the European continent, including the Madrid train bombing (2004), Mohammed Merah's rampage in France (2012), an attack at a kosher supermarket in Paris (2012), and various attacks planned on the Madrid National Court (2004), as well as others by the Hofstad Group in Holland (2004), and another by a Swedish cell (2010).

What seems like a minor drug arrest in Italy could in reality be a fundraising scheme with connections to a broader plot in France.

One of the major consequences of the crime-terror nexus in Europe is that, in order to have a chance at successfully countering attacks carried out by small cells of criminal-jihadists, European nations must work together to share information and intelligence on suspects that may be based in one country but whose network spans several others. What seems like a minor drug arrest in Italy could in reality be a fundraising scheme with connections to a broader plot in France. Preventing attacks requires local police forces to work closely with state and European Union officials, better integrating grass roots intelligence with profiles and backgrounds of individuals who have been identified as foreign terrorist fighters, especially those seeking to return to Europe. This will prove to be a major challenge, as many local police departments are already plagued by a shortage of resources.

One major concern for European law enforcement and counter-terrorism officials is that just as the threat from a crime-terror nexus in Europe is growing, the forces of anti-globalism are strengthening. Encapsulated by Brexit, the move toward hardened borders, increased nationalism and an anti-immigration sentiment — much of it fueled by the threat of terrorism — could do more to harm counter-terrorism efforts in the long run. If the recent vote in Italy has a negative impact on the economies of EU nations, that would further limit the amount of money available for counter-terrorism. Moreover, 2017 could bring a further wave of populist, anti-globalisation political leaders to power throughout the EU.

Cooperation between European law enforcement and intelligence agencies is critical to counter-terrorism.

The fall 2015 terrorist attacks in Paris and the attacks last spring in Brussels — a city with 19 separate administrative police districts that operate independently from one another — revealed that the EU already suffers from a dearth of information-sharing and intelligence cooperation both between and within national borders. A continued trend away from the idea of a federal Europe could make the situation even worse. If the divisions between countries within the EU widen, it might be hard to retain Europol in its current form, something that could seriously further undermine the coordination of national law enforcement. The issue of cooperation between European law enforcement and intelligence agencies is critical to counter-terrorism on the continent, especially considering several of the attackers involved in the November 2015 Paris attacks travelled from Syria to Turkey to Greece, Macedonia, Croatia, Slovenia, Austria and Germany, before moving on toward France.

The clearest implication for EU security policy is the need to become more effective at building the capacity of states to combat organised crime and criminal violence. This can be accomplished through focusing security cooperation efforts in vulnerable countries on ministerial capacity, institution building, and defence reform, all of which are foundational to other forms of capacity, like border control and anti-corruption efforts. However, these are also the imperatives most likely to suffer from increased nationalism, a move away from integration and the further fraying of ties between EU nations across the continent.

As IS continues to suffer defeats on the battlefield, there is greater potential for what FBI Director James Comey has dubbed a “terrorist diaspora,” which he believes will occur when scores of foreign fighters leave the Middle East and attempt to return to the West. IS may have deployed hundreds of operatives into the European Union already, according to some reports, ensuring an effective “international terrorist strike capability” for the better part of the next decade. The post-IS diaspora is likely to have more connections to the European underworld than ever.

The culmination of a returning wave of foreign fighters to Europe just as political divisions between EU countries are worsening suggests a significant and grave challenge for law-enforcement authorities and intelligence agencies. These entities, already stretched thin, must attempt to address and prevent threats posed by groups that operate in the shadows. The work of these agencies has increasingly focused on addressing the return of foreign fighters from Iraq, Syria and other jihadist hotspots throughout the globe. When these fighters are part of an extensive network of criminals and radicals with roots in such places as Molenbeek, Belgium; the Liselby district of Fredrikstad, Norway; or the banlieues of Paris, the transnational threat becomes a lot closer to home.

Colin Clarke is a political scientist at the nonprofit, nonpartisan RAND Corporation and the author of “Terrorism, Inc.: The Financing of Terrorism, Insurgency, and Irregular Warfare” (2015).

This commentary originally appeared on International Centre for Counter-Terrorism on December 13, 2016. Commentary gives RAND researchers a platform to convey insights based on their professional expertise and often on their peer-reviewed research and analysis.