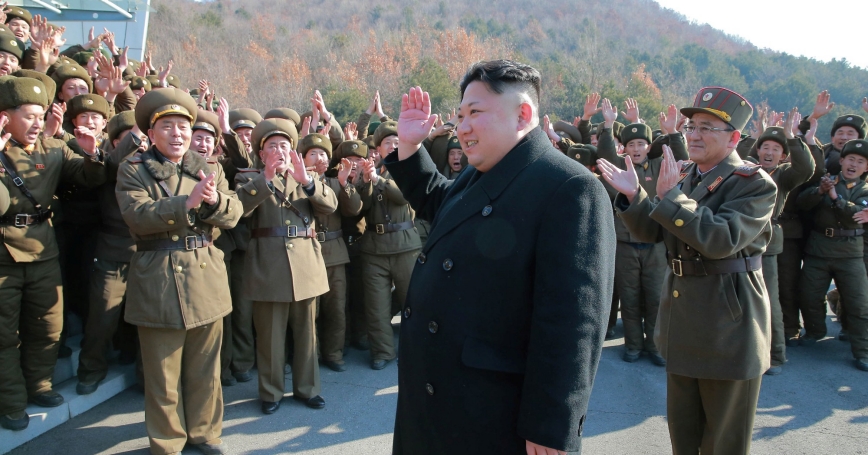 For six months in 2016, North Korea regularly conducted theater missile testing, establishing a pattern before it stopped in late October. Pyongyang then launched one more ballistic missile on Feb. 12 — one day before Kim Jong Nam, half brother of North Korean leader Kim Jong Un, was murdered in Malaysia — and four more on March 6.

Much of the national security community suspects North Korea of being responsible for the nerve agent attack carried out by two women, both of whom have been charged with murder. Pyongyang continues to suggest that a heart attack was to blame.

What would lead North Korea to carry out two frightening provocations just a day apart, and to follow up with another provocation less than a month later? Like most developments involving the Hermit Kingdom, it is impossible to know. But the nearly four-month break between missile launches may have more to do with the political crisis in South Korea than anything else.

North Korea probably took a break from launching missiles in large part to keep the Korean media focused on the failures of South Korean President Park Geun-hye, who was impeached in December on charges of corruption. Park's impeachment, which was upheld earlier this month, opens the door for a friendlier, more dovish leader in Seoul. The current slate of progressive candidates have suggested that they would treat North Korea far more favorably than their conservative predecessors have, but continued missile tests could create a political atmosphere more conducive to South Korea's conservatives.

The Feb. 12 missile launch may have been a response to a tweet the North Korean regime took as a challenge. During his Jan. 1 speech to the North Korean people, leader Kim Jong Un threatened to test launch an intercontinental ballistic missile in 2017. The next day, U.S. President Donald Trump tweeted, “It won't happen!”

Several days after the launch, North Korean media reported that the test was a “preliminary shot” toward the development of a North Korean ICBM. North Korean media taunted Trump by saying that despite his tweet he had “put forth no specific plan yet to put a brake on the action” of North Korea. So the missile launch was apparently a response to, and a test of, Trump. The message Kim wanted to send to his senior elites: He had achieved a great victory by standing up to Trump.

Additionally, North Korea has made several efforts to shape perceptions of the threat posed by the missile. Fired on a lofted trajectory that limited its flight to about 310 miles downrange, it looked more like a Scud-class missile of the type that North Korea has tested many times rather than what the missile in fact is — one with a range of several thousand miles that could threaten Japan and especially China.

The missile uses solid fuel, which allows it to be launched with little or no warning. It was also fired from a new, far more mobile launcher, making it far more difficult to detect and destroy the missile's location, as former Secretaries of Defense Ashton Carter and William Perry recommended in 2006.

And so Kim Jong Un could claim another victory by saying he had developed new approaches for blunting U.S. defenses.

Kim had apparently feared for many years that his older half-brother posed a threat to his leadership and survival. As their father's health was failing in 2011, Kim Jong Un reportedly began killing senior elites in North Korea who had established a relationship with Kim Jong Nam, a process that was said to have largely concluded as of 2012. Lacking a constituency inside North Korea, the familial outcast posed little direct threat to Kim Jong Un. Nevertheless, the young North Korean dictator may have worried that his own defiance of Chinese influence could tempt Beijing to impose a regime change on North Korea in favor of his exiled half-brother.

Geography likely influenced the timing of the attack on Kim Jong Nam. The North Korean leader would not have wanted to offend China by having him attacked in Macau, where he lived. Kim Jong Nam's trip to Malaysia created a viable assassination opportunity, and death by the lethal nerve agent VX.

The message of the four-missile launch

After North Korea launched four more missiles out to a range of about 1,000 kilometers (about 620 miles) in March, it claimed the launches were in response to the threat posed to North Korea by the Key Resolve exercise, one of the two major exercises conducted annually by the United States and South Korea. North Korea said it launched the missiles “targeting U.S. military bases in Japan.” Yet if North Korea was upset at the South, why target Japan? Much of South Korea is only 300 to 500 kilometers from North Korea, so why didn't Pyongyang fire missiles with such a range?

If North Korea fired with that range, its missile threat would be clearly directed against South Korea, which could then undercut any leverage it may have on the impending South Korean presidential election. But in firing these missiles to 1,000 kilometers, was the North Korean threat directed at China? Officials in Pyongyang were undoubtedly furious at China's Feb. 18 cutoff of North Korean coal imports, and North Korean missiles with a 1,000-kilometer range could reach about half of China's largest cities. And perhaps to make the message even clearer, North Korea fired the missiles during the fifth session of the Chinese National People's Congress.

China banned coal purchases from North Korea after the February missile launch and assassination, without clarifying the degree to which these two North Korean provocations led to the Chinese sanctions. But if Malaysia confirms that North Korea is responsible for the murder of Kim Jong Nam, that — along with the possibly anti-China missile launches on March 6 — may force Beijing to take further action to punish North Korea. China will want to show the North that it will pay a high price for its provocations — perhaps making North Korea think long and hard before taking such actions in the future.

This commentary originally appeared on RealClearWorld on March 23, 2017. Commentary gives RAND researchers a platform to convey insights based on their professional expertise and often on their peer-reviewed research and analysis.