Mixed Messages: Is Cocaine Consumption in the U.S. Going Up or Down? 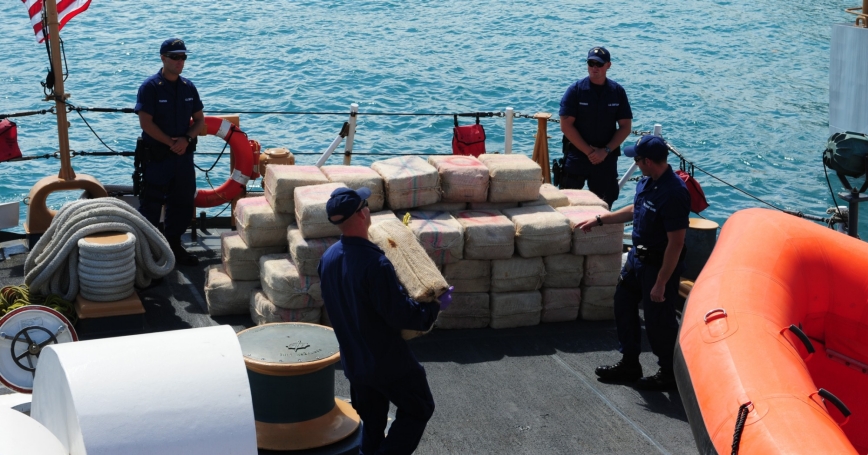 U.S. Coast Guardsmen unload 3,500 pounds of cocaine seized from a vessel in the Caribbean valued at an estimated $43 million in Miami, March 16, 2012

by Beau Kilmer and Gregory Midgette

The 50 percent decline in U.S. cocaine consumption from 2006 to 2010 was regarded as monumental, but data now suggest that cocaine overdose deaths are increasing in the United States. Meanwhile, the amount of land used to cultivate coca in Colombia nearly doubled from 2013 to 2015 (PDF). While it seems plausible to associate these recent changes with a significant increase in U.S. cocaine consumption, that might not be correct.

In a report RAND produced for the White House Office of National Drug Control Policy (PDF), we estimated that the amount of pure cocaine consumed in the United States fell by half between 2006 and 2010, from approximately 300 to 150 metric tons of pure cocaine. Of course, there is uncertainty surrounding estimates from demand-side indicators, but supply-side indicators (PDF)—such as coca production in Colombia, cocaine seizures, and estimates of the amount of cocaine being shipped to the United States—showed similar decreases around the same time.

There is no consensus about what caused this unprecedented drop. At least a dozen serious hypotheses have been advanced, including interdiction efforts within Colombia, precursor controls in the United States, heavy cocaine users aging out, and increased demand for Colombian cocaine outside of the United States. Indeed, there may have been a “perfect storm” of events that had more of an impact occurring together than they would have had separately. However, the existence, magnitude, and importance of the decline are not much in question.

In contrast, it is not yet clear what has happened to the U.S. cocaine market since 2010, let alone why. For example, a 2017 State Department report (PDF) indicates that “Colombia remains the major provider of cocaine available in the United States, though data shows [sic] that cocaine use is declining in the United States.” The report also noted “troubling early signs that cocaine use and availability is on the rise in the United States for the first time in nearly a decade.” Combining the latter quote with trend data about new cocaine users and cocaine overdose deaths, The Washington Post ran an article on March 4 headlined “American cocaine use is way up. Colombia's coca boom might be why.” But just a month earlier, the National Institute on Drug Abuse argued that “cocaine-related overdose deaths increased after 2010, despite decreased cocaine use.”

So which is it?  Is cocaine use way up, or is it decreasing?

Before assessing the evidence, it's important to keep three things in mind. First, prevalence (i.e., the number of people who report having used any at all over the past year or month) and consumption (i.e., the number of metric tons consumed in the United States) are very different measures and sometimes move in opposite directions. That is because a relatively small number of frequent users account for most of market demand, and they are not well represented in general population surveys about drug use. Second, data about frequent cocaine users are scarce and getting scarcer: The best data source for understanding cocaine (and heroin) markets in the United States—the Arrestee Drug Abuse Monitoring (ADAM) program—was defunded in 2013, and another key indicator, the Drug Abuse Warning Network (DAWN) counts of drug-related emergency department mentions, was discontinued in 2011. Third, some indicators are not reported in a timely manner. For example, as of April the most recent national data available about public substance use treatment admissions only extended through 2014.

Figure 1 plots changes in several cocaine-related measures over the past decade, with the series normalized so their 2010 values all equal 100. At first glance they seem broadly consistent with a down-then-up story—or perhaps more accurately, down (2006 to 2010), level (2010 to 2013), and then up just in the last few years. 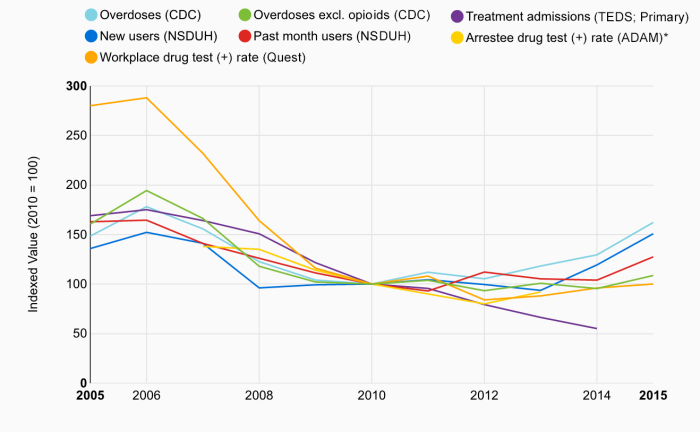 *Note: The cocaine rate for ADAM is estimated from the population-weighted average of five cities where the survey was conducted each year between 2007 and 2013: Atlanta, Chicago, Denver, Sacramento, and the Borough of Manhattan. ADAM was not administered between 2004 and 2006.

However, upon closer examination, only three indicators clearly show an increase since 2010: Initiation, past-month prevalence, and cocaine-related deaths. Four seem to be flat, declining, or discontinued: treatment admissions, cocaine positives among urinalysis drug screens in both jails and the workplace, and overdose deaths for cocaine excluding those for which opioids were also a contributing factor. The first three are weaker measures of heavy use and consumption than are the other four.

We cannot assume that an increase in total cocaine-related deaths necessarily implies a proportionate increase in cocaine consumption.

Cocaine overdose deaths might seem like the ultimate measure of heavy, destructive consumption, but deaths can rise when patterns of heavy use become more dangerous, not just when the number of heavy users increases. In Figure 1, we distinguished cocaine-related deaths with and without opioids as a contributing factor since a new study in the American Journal of Public Health finds that “opioids, primarily heroin and synthetic opioids, have been driving the recent increase in cocaine-related overdose deaths.” There are a few plausible explanations for this. The authors of that study highlight evidence that “heroin use among people using cocaine increased significantly,” and heroin is sometimes laced with the powerful synthetic opioid fentanyl, which significantly increases the probability of an overdose. Indeed, there are also reports that some of the cocaine being sold in the United States (and Canada) is laced with fentanyl. Therefore, we cannot assume that an increase in total cocaine-related deaths necessarily implies a proportionate increase in cocaine consumption.

The initiation and prevalence data in Figure 1 are from the National Survey on Drug Use and Health. The survey is well-run and a surprisingly reliable source of information about marijuana use and light or infrequent use of other drugs, but household surveys are not very useful for studying the heavy users who account for most of the consumption. The number of survey respondents self-reporting past month use grew from 1.5 million in 2014 to 1.9 million in 2015. That is concerning, but it is rather weak and circumstantial evidence about trends in the number of high-frequency users.

Those participating in discussions about cocaine policies should be careful about making claims about recent changes in U.S. cocaine consumption. Data lags and the elimination of the ADAM program cloud the picture after 2013. Caution is also needed, since the emergence of fentanyl has compromised the ability to make inferences about consumption from trends in cocaine overdose deaths. But absence of evidence is not evidence of absence, and much will be learned when the Office of National Drug Control Policy releases updated consumption figures as part of its “What America’s Users Spend on Illegal Drugs” series (the next wave will cover 2000 to 2017).

In addition to the pessimistic interpretation (“consumption is up already”) and the cautious interpretation (“prevalence may be up but it's too soon to say about total consumption”) there is a third possibility. Problem use may not have risen appreciably yet, but it could because of the delay between initiation of light use and the serious health harms that can ensue. An oft-cited study from 2002 found that about 16 percent of new cocaine users will develop cocaine dependence within 10 years. The 10-year qualifier is significant. For some users, cocaine can be powerfully addictive and destructive to health, social relationships, and public safety. If past trends hold, roughly 150,000 of the 968,000 self-reported new users in 2015 will develop cocaine dependence even though few have yet.

It may be prudent to start planning for an increase in heavy use even before all of the evidence is in.

This commentary originally appeared on Brookings - Up Front on April 28, 2017. Commentary gives RAND researchers a platform to convey insights based on their professional expertise and often on their peer-reviewed research and analysis.