RAND researchers generated national estimates of consumption of four illicit drugs from 2000 to 2010: cocaine, heroin, marijuana, and methamphetamine. Throughout the decade, U.S. drug users spent on the order of $100 billion annually on these drugs, although the spending distribution and use patterns changed. For all of the drugs, total consumption and expenditures are driven by the minority of users who consume on 21 or more days each month. 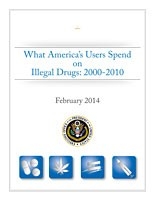 In January 2012, the U.S. White House Office of National Drug Control Policy (ONDCP) asked RAND to generate national estimates of the total number of users, total expenditures, and total consumption for four illicit drugs from 2000 to 2010: cocaine (including crack), heroin, marijuana, and methamphetamine. Drug users in the United States spend on the order of $100 billion annually on these drugs (in 2010 dollars). While this total figure has been stable over the decade, there have been important compositional shifts. From 2006 to 2010, the amount of marijuana consumed in the United States likely increased more than 30 percent, while the amount of cocaine consumed in the United States decreased by approximately 50 percent. These figures are consistent with supply-side indicators, such as seizures and production estimates. Methamphetamine consumption rose sharply from 2000 through the middle of the decade, and this was followed by a large decline through 2008. Heroin consumption remained fairly stable throughout the decade, although there is some evidence of an increase in the later years. For all of the drugs, total consumption and expenditures are driven by the minority of users who consume on 21 or more days each month.

Please note: This report is not available on the RAND website but can be downloaded from the whitehouse.gov website.

Through 2010, Spending on Illicit Drugs Held Steady, but Distribution Shifted

Marijuana Use Was Up, Cocaine Down, Heroin Holding Steady and Meth Hard to Estimate

There Is A Lot of Uncertainty Surrounding These Estimates