The Driving Force Behind China's Ambitious 'Belt and Road Initiative' 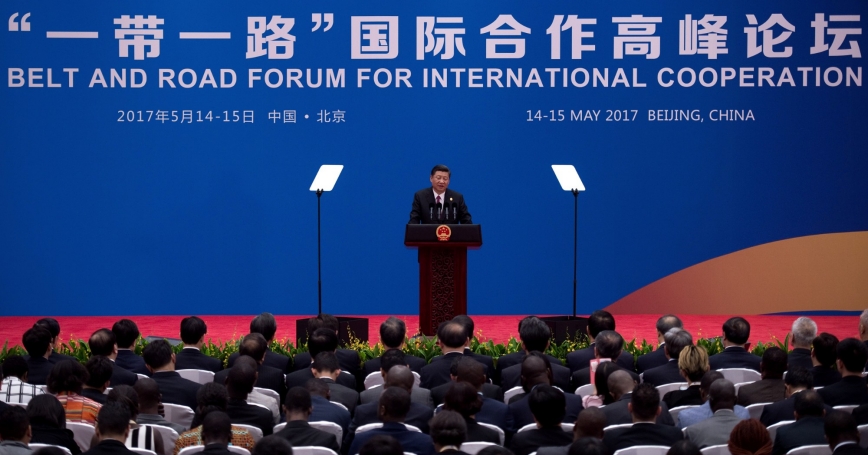 Chinese President Xi Jinping speaks during the Belt and Road Forum, at the Yanqi Lake International Conference Centre, China, May 15, 2017.

China's plan to drive the Eurasian landmass' future growth is audacious. By committing trillions of dollars to infrastructure projects across 60 countries, China could transform the lagging economies of the region and place itself in the enviable position of being Asia's true pivot. Nevertheless, the new Silk Road blueprint—formally called the Belt and Road Initiative—presents risks as well as benefits.

President Xi Jinping emphasized the benefits at a recent Beijing summit with leaders from more than two dozen countries, including the late addition of a senior Trump administration official. Xi pledged that China will substantially enrich the pot for the initiative announced in 2013, which, if successful, will propel economic growth for more than 1 billion people in some of the poorest regions of Asia and Africa. Some have touted the initiative as a Chinese Marshall Plan.

But unlike the European Marshall Plan, which helped rebuild a region with stable political systems, a well-functioning bureaucracy and an educated population, the Belt and Road Initiative targets countries that are struggling on multiple fronts, faced with wobbly governments, terrorist threats, illiteracy and inhospitable terrain, to name a few. If China's scheme to erect highways, railways, power grids, pipelines and other huge projects fails—and there will undoubtedly be some failures—host governments could be left deeply in debt, jeopardizing China's relations with them on a long-term basis.

To underwrite some of the risks, China is providing liberal financing up front from its state-controlled banks, as well as from special lenders such as the newly formed Asian Infrastructure Investment Bank. It is also, in some cases, supplying the labor and materials in order to speed up projects and ensure quality. Although those moves could alienate the local population and businesses, China insists that it does not want to monopolize the projects. Nor is it unwilling, it says, to share the opportunities with other countries, including the United States. Chinese officials note, for instance, that General Electric has been awarded contracts reportedly worth $1 billion to supply electric power equipment for a Belt and Road Initiative project in Pakistan.

The gains for China are expected to be tremendous. The first is purely economic: China's objective is to build and manage supply chains among Belt and Road Initiative countries. These countries will manufacture lower-end and intermediate goods, such as semi-finished steel, while China will provide the finished goods.

The role envisioned for Belt and Road Initiative countries is conceptually identical to China's position at the end of the last century. Between 1980 and 2000, China used its cheap labor and raw materials to produce outsourced products that were designed, finished and exported by its wealthier Asian neighbors. Since 2000, China has moved up the value chain and now feels ready to replicate the "Asian miracle" in these countries, this time, with itself in the driver's seat.

The non-economic gains could be equally significant. The legitimacy of the Chinese government rests on advancing the quality of life for its citizens. Shifting low-end, smokestack manufacturing out of China will go a long way toward creating more high-end jobs and ameliorating such intractable problems as air pollution and traffic congestion in the cities.

The new Silk Road will run through the restive areas of western China, bringing economic opportunity that could help to ease political tensions. Stabilizing terrorism-threatened regions in Central Asia would bring important security gains that would benefit not just China, but the world.

An additional benefit to China is that the new economic corridors will help secure an alternative route for Chinese exports to reach other countries.

The U.S. could be a key player in how the Belt and Road Initiative evolves. It could help underwrite the economic and non-economic gains, as China claims it wants and that the initiative likely needs. American participation could also help reassure many countries that rely on the U.S. to guarantee the security of the region. If the decision to dispatch White House aide Matt Pottinger to last week's summit signals a change in U.S. policy, and if that change is genuinely reciprocated by China, it could augur well for China's ambitious agenda.

This commentary originally appeared on U.S. News & World Report on May 26, 2017. Commentary gives RAND researchers a platform to convey insights based on their professional expertise and often on their peer-reviewed research and analysis.