Where Are India's Heat Hotspots? 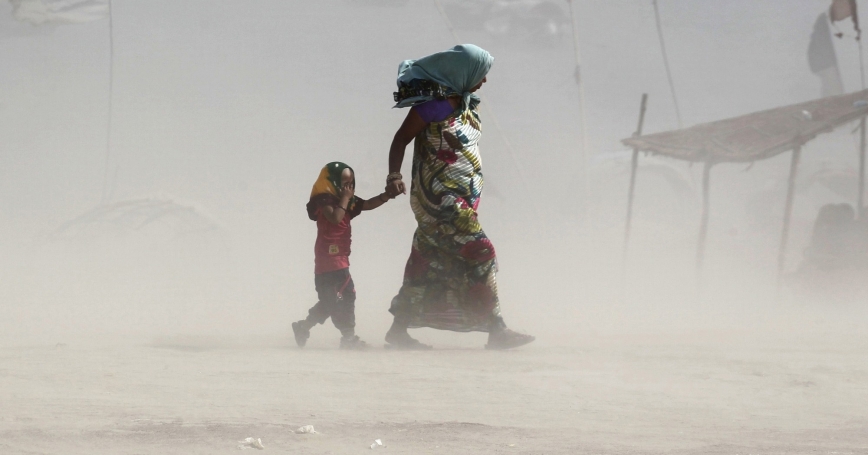 A mother and her child walk along the Ganges river during a dust storm on a hot summer day in Allahabad, India, June 9, 2015

Heat waves across the world have killed tens of thousands of people since the turn of the century. In the U.S., more people die from deaths related to heat than all other natural phenomena combined. Parts of West Asia are expected to become inhospitable to human life by the end of this century. And in recent years, India and neighboring regions have experienced several devastating heat waves, causing the country to increasingly focus on a growing global concern—rising temperatures as a public health threat.

By 2022 India's population is projected to exceed China's, making it home to one-fifth of the world's population. As a developing country located in the tropics, India suffers from factors that make it vulnerable to heat waves: persistent poverty, poor sanitation, a precarious water and electricity supply and low rate of access to health care.

Lives can be saved by simple prevention measures that include educating people how to cope and having an organized response plan. Such measures can also be extremely cost effective. But in developing countries, resources are scarce. Therefore it would help if we knew which populations are at risk. To address this, researchers from the nonprofit RAND Corporation, supported by RAND's Center for Asia Pacific Policy, developed a heat vulnerability index.

From our literature review, we identified key factors that contribute to heat vulnerability. These include extreme age groups (elderly and children), income, caste, health status and the green cover in each region. Data from each of the 640 districts in India on these vulnerability factors was then gathered from multiple sources (census, health surveys, and satellite maps) and statistically combined to generate a heat vulnerability index. We used the index to pinpoint locations where the population is most vulnerable to heat and identify where adaptation efforts are most needed. For our study, we partnered with researchers from the Indian Institute of Public Health Gandhinagar, the Public Health Foundation of India, and Emory University.

The most vulnerable districts were found to be in central India.

The most vulnerable districts were found to be in central India. With a high tribal population, these districts have historically had poorer health and education standards, and lower standards of living than other districts. These land-locked, high-vulnerability districts in the North and Central Indian plains are frequently targeted for focused development interventions. The index demonstrates that interventions in India should include adaptive measures to protect against the dangers of heat.

While most heat adaptation planning has been conducted for urban (PDF) areas, our index indicates that rural areas (where the majority of Indians live) are vulnerable and should be targeted for heat-health action plans. While urban areas can often be warmer than rural areas in the vicinity due to human activities, our study shows that rural areas are more vulnerable due to their socio-economic characteristics. These are often outcomes of lower investment in infrastructure and services delivery. They also have distinct challenges. For example, timely response is hard to deliver there because of poor infrastructure and an absence of phone and internet service—underscoring the importance of prevention.

What responses might be cost-effective? In rich countries like the U.S., air conditioning has played a major role in reducing heat wave deaths, but it is unlikely to be a solution for India, because few people have access to air conditioning, due to its cost and the lack of reliable power supply.

Effective, low-cost short-term strategies in India could include alerts delivered through public messaging on radio and TV, mobile phone-based text messages, and automated phone calls to those who have access to these. Through these channels, residents can receive timely reminders regarding what to wear (light clothing) and drink (lots of water), and where to stay (indoors or in shaded areas). In the longer-term, taking heat into account when designing buildings could also be an important adaptive measure. For instance, shaded windows, underground water storage tanks, access to drinking water, and roofs constructed to keep homes cooler can all make a difference.

At the same time, solutions should be relevant to the regions affected. Presently, little is known about the measures that need to be customized for different regions. However, researchers could choose to focus on the strengths of areas that are likely to be more vulnerable For example, rural areas may have advantages in terms of better social connections, thus making certain kinds of communication, such as text messages, more effective.

With ever-rising populations and temperatures, the burden of heat on health in India is likely only going to increase in coming decades. Understanding where population vulnerability exists is a critical first step toward protecting a population's health. By developing and targeting local adaptation strategies, India can enhance its preparedness for this enormous public health challenge.