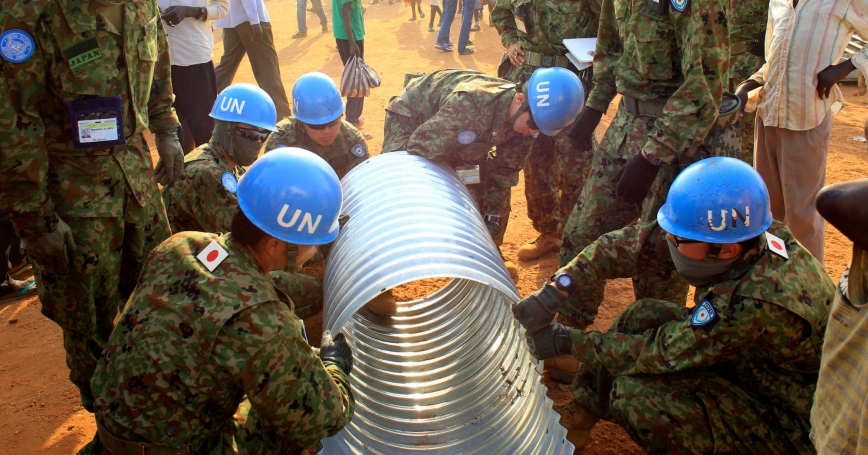 The Japanese government has officially completed a withdrawal of Ground Self-Defense Force (GSDF) personnel from a peacekeeping operation in South Sudan, ending Tokyo's longest and largest UN peacekeeping mission. At a time when tensions around the world are rising, dependable allies committed to contributing to international security are in high demand. Prime Minister Shinzo Abe's decision to withdraw the GSDF from South Sudan is an unfortunate choice. Not only does it deprive the SDF of crucial operational experience, it also sends a confusing message to the United States and the international community.

Japan has dispatched a total of 4,000 SDF personnel to South Sudan since the mission began in January 2012. During this time, the SDF repaired more than 200 kilometers of road and turned about 500,000 square meters of land into usable plots. These efforts greatly improved the lives of the people of South Sudan through their stabilizing effects.

The mission was never related to combat; Japanese missions never are. As a legacy of World War II, Japan adopted a constitution that forbade the use of force to settle international disputes. Until 1991, SDF personnel were never dispatched overseas. International society's overwhelming criticism of Tokyo's reliance on checkbook diplomacy to deal with the Gulf War shocked Japanese decision-makers to change.

Over the subsequent two decades, different governments passed laws that slowly gave new authorities to the SDF to act overseas, but always within tight legal constraints. With a motivation to be an actively contributing member of international society, successive Japanese governments deployed the SDF on a variety of non-combat missions to places like Cambodia, Rwanda, Golan Heights, Timor-Leste, and even Iraq, shortly following the U.S. invasion in 2003. The South Sudan mission was simply another such mission.

Unlike other countries' troops, however, until 2015 the SDF were only authorized to use weapons to protect themselves and those under their supervision. If others came under attack, they legally could not assist. In 2015, the Abe administration changed that by passing landmark legislation that included a small relaxation on the limits on force.

Armed with this new authority, in November the Abe government assigned new responsibilities to a GSDF unit preparing to deploy to South Sudan, allowing them to use their weapons to play a bigger role in joint protection of UN peacekeepers' camps and to come to the rescue of UN staff or nongovernmental organizations who come under attack. This historic change led to expectations that Japan was serious about international security and willing to take on greater responsibilities as a security provider.

Despite these new assignments becoming active on December 12, in March the Abe administration announced it was withdrawing these troops and ending the mission. Questions swirled about the motivation behind Abe's decision, as no actor requested that Japan withdraw. Was he worried about the deteriorating security conditions in South Sudan, which might necessitate the SDF to actually exercise their new rights? Or was it because the security conditions made it difficult for the SDF to perform their main task of reconstruction? Publicly, the government said the SDF's mission was complete. Regardless of the motivation, announcing the GSDF's withdrawal only three months into this new mission comes at significant cost for Japan.

More than anything else, withdrawal deprives the GSDF of critical operational experience. There are now no Japanese troops engaged in UN peacekeeping missions anywhere in the world. With increasing tensions on the Korean Peninsula and between China and other regional states, the GSDF may one day be asked to perform a rescue operation of Japanese nationals overseas. Building a system that can cope with emergencies in an expeditious manner requires more than peacetime training in Japan. It requires real-world experience. Gathering and analyzing information on transport routes and capabilities of opponents, extracting people from a threatening environment, and securing transport routes are areas in which the GSDF has no experience. The South Sudan mission had the potential to provide them with critical aspects of this.

Abe's decision also carries reputational cost. Since becoming prime minister in 2012, Abe has emphasized the need for Japan to play a more proactive role in contributing to international peace, recognizing Japan's responsibilities as a major power. Abe's 2015 legislation was seen as an indication that Japan was finally willing to accept risk. It was never expected that Japan would become a “Britain of Asia” that was capable of marching into combat, but it was hoped Japan would become more of a security provider, ushering in a new era of Japanese security contributions. The South Sudan mission was seen as the first operationalization of that 2015 framework. But with only five full months of implementation — never actually exercising the new rights — evidence of Japan's seriousness about proactive contributions to peace remains elusive.

Japan is a major international player with global interests. Being a proactive contributor to peace inherently involves risk if the country is serious about gaining real-world operational experience. With its own regional security environment becoming more challenging, it behooves Japan to engage risk now to enhance its reputation as a reliable security provider and boost its capabilities to deal with various future crises. Withdrawing from South Sudan is not the means to achieve that end.

This commentary originally appeared on The Diplomat on June 7, 2017. Commentary gives RAND researchers a platform to convey insights based on their professional expertise and often on their peer-reviewed research and analysis.