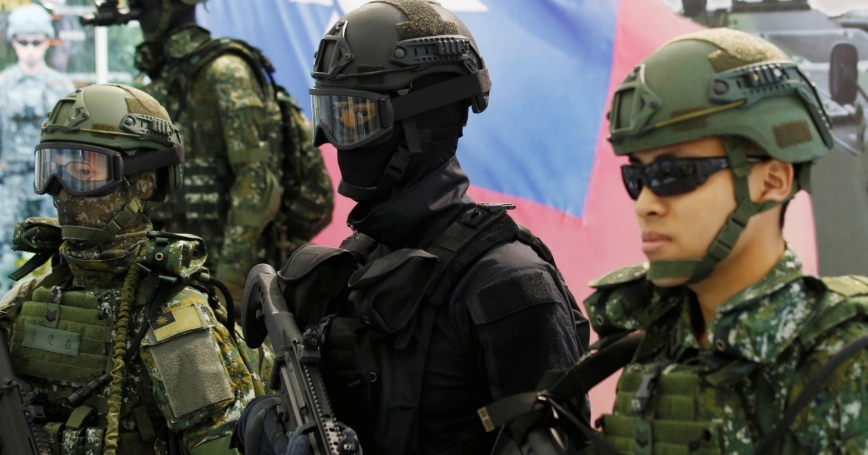 Taiwan's Quadrennial Defense Review (QDR)—mandated for submission within 10 months after the presidential inauguration—offers an assessment of Taiwan's security environment and the ways in which the Ministry of National Defense (MND) plans to respond over the next four years. Published in March, Taiwan's latest QDR represents the third installment of this process and the first under President Tsai Ing-wen's administration.

Our analysis of this document, specifically when compared with the 2013 and 2009 QDRs, reveals that the current iteration maintains a remarkable amount of thematic consistency in areas such as defense strategy, reform of the military service system, and defense budget constraints with earlier versions despite the transition of power to the opposition party in 2016. There is also considerable evolution in the focus on developing Taiwan's domestic defense industry under President Tsai. Perhaps one of the most significant changes is that the new QDR appears to reflect heightened uncertainty over the future course of U.S. policy in the Asia-Pacific region. Additionally, the new QDR is more forward leaning than previous editions on the need for Taiwan to procure specific weapon systems to provide for its defense.

First, regarding consistencies across QDRs, the MND's defense strategy at its core remains the same. Although the MND pitches a new catchphrase dubbed “resolute defense, multi-domain deterrence” (防衛固守、重層嚇阻), this should not be interpreted as being at odds with the previous adage that Taiwan seek to develop and maintain “resolute defense, credible deterrence.” Indeed, both strategies seek to deter or, if necessary, repel a Chinese attack against the island by developing key capabilities and enhancing the Taiwan military's ability to conduct joint operations. “Multi-domain deterrence,” however, reflects the MND's assessment of the potential battlefield implications of the Chinese military's reorganization in 2016. Beijing's heavy emphasis on cross-domain situational awareness and proficiency—most acutely displayed by its establishment of the PLA Strategic Support Force which combines cyber, electronic jamming, and space warfare—has likely convinced the MND of the need to complicate multiple forms of warfare simultaneously. Thus, the 2017 QDR emphasizes that Taiwan's armed forces should be able “to present multiple dilemmas to the enemy and deter aggression.”

There are many other commonly addressed topics across QDRs. For instance, Taiwan's desire to transform its armed forces into an all-volunteer force, first introduced in 2009, is also noted in 2017, but with little fanfare, probably because of the problems the MND has experienced in making the transition to an all-volunteer system. Taiwan's limited defense budget, which creates a variety of challenges in defense planning, is another familiar theme. What is interesting here is that, while the 2009 QDR leads off by advocating raising Taiwan's defense budget to at least three percent of GDP, subsequent QDRs resist reiterating this call and instead only highlight the fact that Taiwan's defense budget is constrained. All QDRs offer updates on China's ongoing military modernization and the implications for Taiwan's own planning.

Another important consistency, albeit with notable evolution that reflects stronger emphasis under President Tsai, is the call to develop an indigenous defense industry to produce advanced armaments for Taiwan's defense. Starting in 2009, the QDR advocated for the creation of a “self-reliant defense establishment,” with no further details. By 2013, the MND had fleshed out the domestic defense industry concept further, stating that Taiwan would turn to domestic experts for military projects exceeding $1.6 million (2013 currency conversion), and it would seek domestic industry offsets of at least 40 percent for foreign procurement. Taiwan's latest QDR highlights aerospace, shipbuilding, and information security as priority areas for investment. Indeed, the Tsai administration's renewed push to build conventional diesel-electric submarines indigenously is evidence of the seriousness with which her government is approaching the domestic defense industry. It should be noted that the emphasis on the defense industry is part of President Tsai's “five-plus-two” innovative industries initiative, which underscores that it is not just about bolstering Taiwan's defense capabilities, but also an important component of her broader approach to economic policy.

One of the major areas of departure from past QDRs is in describing U.S. policy toward the Asia-Pacific region. In particular, the 2017 QDR states that U.S. policy “remains to be seen while the rise of China has a tremendous impact on the surrounding regions.” By contrast, the 2013 QDR lauded Washington's strategic rebalance because it enabled the United States to continue “to play a leading role in the Asia-Pacific.” In what might be interpreted as a hedge, the QDR later states that the United States had “sustained its forward military presence in the region” while strengthening “its key capabilities for future operations.” Despite these comments on the U.S. military presence and future capabilities, it is noteworthy that the latest QDR appears to reflect some uncertainty about the overall direction of U.S. Asia policy under the Trump administration. This should come as no surprise given uncertainty in the region about the economic and diplomatic components of the Trump administration's approach to Asia, particularly U.S. withdrawal from the Trans-Pacific Partnership (TPP), and concerns related to Trump's recent statement that he would check with China first before considering another phone call with President Tsai.

Separately, in a first for a QDR, the 2017 version points to a specific military capability that Taiwan assesses is needed for defense. The MND notes that Taiwan's armed forces are “planning to acquire new fighters capable of vertical or short takeoff and landing (V/STOL) and having stealth characteristics”—almost certainly a reference to acquiring the U.S. F-35. None of the previous QDRs ever mentioned specific systems of interest, only armaments that had already been agreed to with the United States. For example, the 2009 QDR references a deal with Washington to acquire attack helicopters, Patriot III missiles, upgraded E-2T aircraft, submarine-launched harpoon missiles, and medium-range anti-armor missiles. This comes as some observers highlight concerns that the Trump administration might be delaying Taiwan arms sales as it seeks China's cooperation on North Korea.

When considering Taiwan's 2017 QDR, there are notable consistencies with previous QDRs, but also a noticeable evolution in thought on key programs and initiatives. Additionally, the 2017 version appears to signal some uncertainty about the direction of U.S. Asia policy under the Trump administration, which is understandable in light of the fact that it has yet to announce a strategy to replace the U.S. “rebalance” or “pivot” to Asia. The MND's decision to reference the need to acquire the F-35 suggests growing alarm in Taipei over the improving accuracy of the Chinese military's targeting of Taiwan's runways and the threat this poses to the island's air-to-air capabilities. Hence, U.S. policymakers might interpret the 2017 QDR as a reflection of an increasingly anxious Taiwan that would greatly benefit, not only from reassurances, but also from a serious U.S. reconsideration of its defense needs.

The main point: Taiwan's 2017 QDR—the first under President Tsai—emphasizes a number of issues that figured prominently in previous QDRs, including defense strategy, reform of the military service system, and challenges related to defense budget constraints. The latest QDR also calls for acquisition of new fighters and highlights the importance President Tsai attaches to improving Taiwan's domestic defense industry, with particular emphasis on aviation, shipbuilding and information security. Additionally, the QDR appears to reflect some uncertainty about U.S. Asia policy under the new administration, underscoring the importance of U.S. reassurances and consideration of Taiwan's defense needs, including arms sales.

Derek Grossman is a senior defense analyst at RAND Corporation. He formerly served at the Defense Intelligence Agency as the daily intelligence briefer to the Assistant Secretary of Defense for Asian and Pacific Security Affairs at the Pentagon. The views expressed in this article are those of the author and do not reflect the official policy or position of the Defense Intelligence Agency, Department of Defense, or the U.S. government.

Michael S. Chase is a senior political scientist at the nonprofit, nonpartisan RAND Corporation, a professor at the Pardee RAND Graduate School, and an adjunct professor in the China Studies and Strategic Studies Departments at Johns Hopkins University's School of Advanced International Studies.

Logan Ma is a research assistant at RAND Corporation. He formerly served at the American Institute in Taiwan, the Freeman Chair at the Center for Strategic and International Studies, the State Department's Bureau of East Asian and Pacific Affairs, and the World Resources Institute.

This commentary originally appeared on Global Taiwan Brief on June 14, 2017. Commentary gives RAND researchers a platform to convey insights based on their professional expertise and often on their peer-reviewed research and analysis.