How the Gulf Row Could Tear Libya Apart Even Further 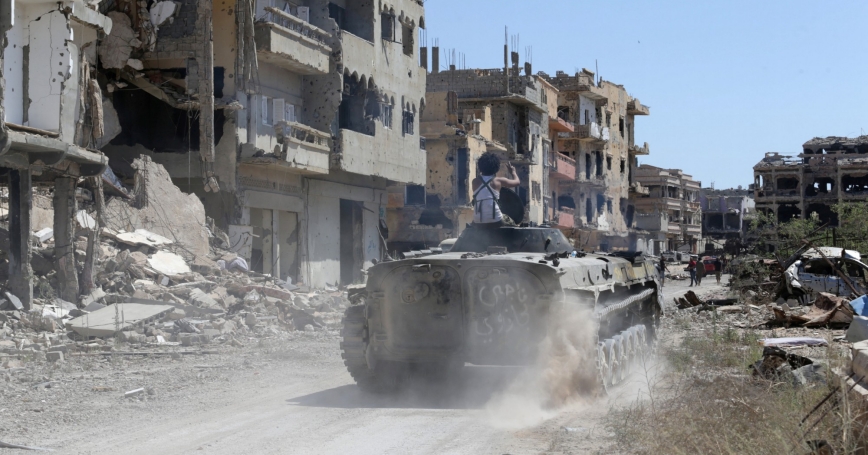 A tank belonging to special forces of the Libyan army enters the area of clashes with Islamist militants in their last stronghold in Benghazi, Libya, July 5, 2017

Prospects for reconciliation among Libya's warring factions are already at a nadir. The ongoing discord in the Persian Gulf is only harming those prospects. On one side is Khalifa Haftar, a well-financed former military commander backed by Saudi Arabia, Egypt, and the United Arab Emirates in the east. On the other is an ambiguous blend of Islamists and other non-identifying armed groups that have operated with intermittent support from Qatar and Turkey in the west.

The tragedy is that Libya's alignments with competing Gulf nations amid the current row may contribute to the instability. Qatar may indeed be linked to Islamist factions in Libya. Its leaders disavow accusations of having had a hand in fueling the conflict while pointing the finger in the other direction. The real harm could come from Libya's factional ruts — reinforced by all Gulf actors — that handicap stabilization prospects. These political divisions have rendered the country a prime location for jihadist activity on the southern Mediterranean coast.

This Libya-Gulf connection goes back to 2011 when a motley assortment of Libyan militias united to remove long-time strongman Moammar Gadhafi from power. Not long after the NATO-led intervention, it became clear that competing Gulf nations were vying for position in Libya through an array of proxy forces to influence political outcomes. Both Qatar and the UAE delivered an assortment of materiel — machine guns, modern assault rifles, ammunition, rocket launchers, and anti-tank weaponry — and money to their preferred armed groups.

Many of these weapons landed in the hands of jihadists, and the U.S. did little more than urge both countries to halt shipments. Libya's rival militias — armed and funded by their respective Gulf sponsors — set the framework for the nationwide civil conflict that erupted in 2014 and continues to ravage the country.

High-grade weaponry and aircraft have reportedly flown freely to Libya in violation of the UN arms embargo.

In light of mounting tensions and diplomatic scuffles between Qatar and its neighbors, leaders in Doha pulled back efforts in Libya and the Gulf states agreed to stay united. Ever since, high-grade weaponry and aircraft have reportedly flown freely to Libya in violation of the UN arms embargo — an overwhelming number originating from the Emiratis to the eastern government. With a stream of weaponry and few viable options for political solution on the horizon, the fighting is unlikely to stop soon. Meanwhile, the UN-backed Government of National Accord in Tripoli simply cannot compete on par.

Oil is another factor in the row among the Gulf states over Libya. All of the nations involved are members of OPEC, and Libya's output has been erratic and slow moving due to persistent insecurity.

At this point, Haftar and his armed coalition hold varying degrees of physical control over Libya's oil fields, infrastructure, and ports in the country's east and south. With Saudi, Emirati, and Egyptian support, he has managed to keep supplies up since early 2017. The Tripoli government, however, still maintains ultimate management of production with Central Bank and National Oil Corporation (NOC) subservient to Tripoli continuing to profit from the oil sales. Qatar's sovereign wealth fund also happens to hold a second-degree financial stake in the NOC. In a New York Times op-ed last week, Chairman Mustafa Sanalla publicly denied allegations made by the Saudi alliance that the body was working at the behest of the Qatari government. Accusations from all sides and the resulting stress on Libya's political institutions are unlikely to halt any time soon.

Lastly, every other international actor involved in Libya has its own set of relationships with both Gulf nations and internal Libyan actors that could make for more discord. For example, for at least the past two years, the Kremlin has been backing the same faction as the Saudis and the UAE. But Moscow is opposed to Saudi-Emirati efforts to remove Bashar al-Assad in Syria and their stance toward Iran. Russia is essentially allied with Qatar's adversaries in Libya while fighting the efforts of all Gulf actors in Syria. Meanwhile, Qatar has turned to Iran, also a friend of Russia, for help after the Saudi alliance imposed an embargo on it. The U.S. and European actors engaged in Libya that have concurrent relationships on both sides of the Gulf dilemma could face a similar risk.

Despite nearly three years of UN-led diplomatic efforts, today Libya remains fractured and torn. It is fair to say that the proxy wars waged between Qatar and Saudi Arabia and its Arab allies have contributed to this outcome, and continue to do so with their respective materiel and information warfare. Unfortunately, it may only get worse.

Amanda Kadlec is a policy analyst at the nonprofit, nonpartisan RAND Corporation.

This commentary originally appeared on Foreign Policy Concepts on July 7, 2017. Commentary gives RAND researchers a platform to convey insights based on their professional expertise and often on their peer-reviewed research and analysis.