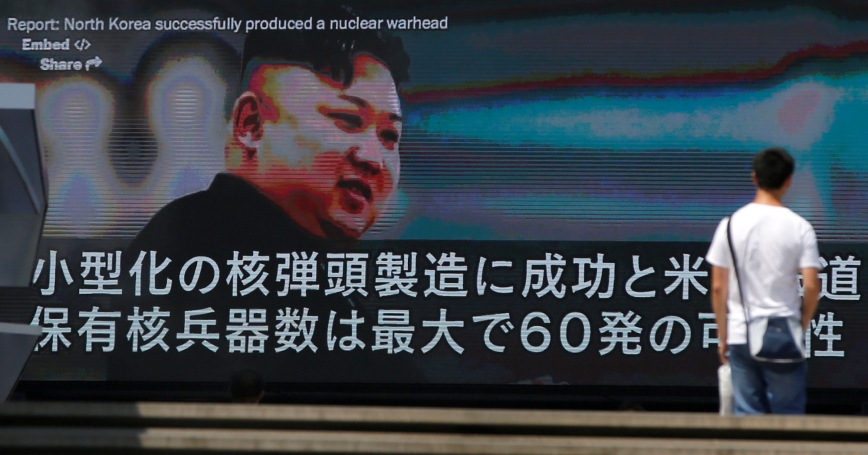 North Korea's recent missile tests, and reports of its progress in nuclear warhead design have produced a volatile new urgency in U.S. policy. Threats of war are in the air.

The message seems clear: The United States is determined to keep North Korea from crossing certain thresholds and appears to be willing to do whatever it takes to achieve that goal.

Yet, amid all the urgency, a critical question remains largely unanswered: Just what North Korean nuclear capability is the United States prepared to live with? The idea of a preventive war to deny nuclear weapons to rogue states isn't new — some hawks favored such preventive action against the Soviet Union and China in the Cold War. In both cases, U.S. administrations rejected military action and decided to rely on deterrence, containment and the ability of outside influences to transform autocratic systems.

Precipitous military action would be both unnecessary and unwise.

Now, the same basic question needs to be answered with regard to North Korea. Despite the awful character of the regime, the same patient strategy can serve U.S. interests. In this case, as in those earlier cases, precipitous military action would be both unnecessary and unwise.

There is evidence, for example, that some transformation is already underway — North Korean society is changing. A host of nongovernmental organizations are working to smuggle information into North Korea, from leaflets to USB drives filled with Western and South Korean television shows.

Recent defector interviews suggest the regime's monopoly on information is fraying. North Korea's economy is increasingly capitalist, dominated by formal and informal marketplaces. As in the Cold War, time is on the United States' side, not North Korea's.

In the meantime, deterrence can work — and has worked. North Korea is a cruel, violent regime, but it is not irrational and not even all that unpredictable. It values regime survival above all else, meaning that classic deterrence is a perfectly good starting point for dealing with the North's nuclear capabilities.

Both history and recent events suggest that deterrence has been working. There has been no war on the Korean Peninsula since 1953, and U.S. and South Korean firmness has helped to deter even limited aggression since 2010.

The United States and the Republic of Korea should take continual steps to bolster deterrence.

The United States and the Republic of Korea (ROK) should take continual steps to bolster deterrence, such as deploying tools to mitigate the North Korean missile threat and working to keep the U.S.-ROK alliance healthy. Foregoing preventive war does not imply weakness — the ability of the U.S. and ROK to respond to North Korean aggression, at whatever level, must be strong enough to be fearsome and unquestioned.

Threats of force to compel denuclearization, on the other hand, stand little chance of working. Pyongyang views nuclear weapons as essential to its survival, and Kim Jong Un may think they are crucial to his own power. The regime will not agree to complete disarmament any time soon, maybe not ever. If U.S. policy makes disarmament a necessary near-term condition of success, it will likely fail, triggering other actions.

China also opposes North Korean nuclear progress, but it worries about the massive instability that would arrive with any conflict or North Korean collapse. China will not simply “cut off” North Korea no matter how much the U.S. threatens, in part because it has no interest in being seen as doing the bidding of the U.S. on its own doorstep. But Beijing's recent support for new, unprecedentedly tough U.N. sanctions is an important step and an example of the significant help Beijing can give to a pragmatic approach.

Even a surgical strike on North Korea carries massive risks of escalation. In response to a pinprick attack on its facilities, North Korea would likely move them underground and accelerate its nuclear program, only bringing closer the day of ultimate reckoning. The North has threatened large-scale retaliation against the ROK, Japan, and now Guam and the continental United States.

Pyongyang might be bluffing — no one can be sure — but if it fulfilled such threats, a major war would be on. Hundreds of thousands could die. China might well side with the North; it has suggested that the movement of U.S. forces into North Korea could be an act of war.

It is easy to imagine how a small fight could become a very big one.

During the Cold War, the United States and the USSR developed elaborate procedures, systems and rituals to ensure that local fights did not escalate. No such formalized system exists between Washington and Pyongyang. Meantime, South Korea has adopted a doctrine of disproportionate response — to hit back several times as hard as any North Korean provocation. It is easy to imagine how a small fight could become a very big one.

These hard realities leave a number of unsatisfying, but strategically sensible, policy options. Reinforce the deterrent posture in the region and make crystal-clear the destruction that North Korea would court with any aggression. Bolster the U.S.-ROK alliance, and encourage China to impose consequences for armed provocations.

Respond quickly but with moderation to low-level North Korean attacks. Pressure the North for a pause in its nuclear development through economic sanctions and multilateral diplomacy, while being very explicit — as Secretary of State Rex Tillerson has done — that the U.S. welcomes meaningful negotiations. Redouble efforts to shut down North Korean currency-generating activities, and take powerful steps to maximize the flow of information and the pace of social change inside the North.

Contain, deter and transform. Not a radical solution, but one that has worked before — and an approach that holds out the hope of preserving U.S. interests while avoiding war.

This commentary originally appeared on The Hill on August 9, 2017. Commentary gives RAND researchers a platform to convey insights based on their professional expertise and often on their peer-reviewed research and analysis.