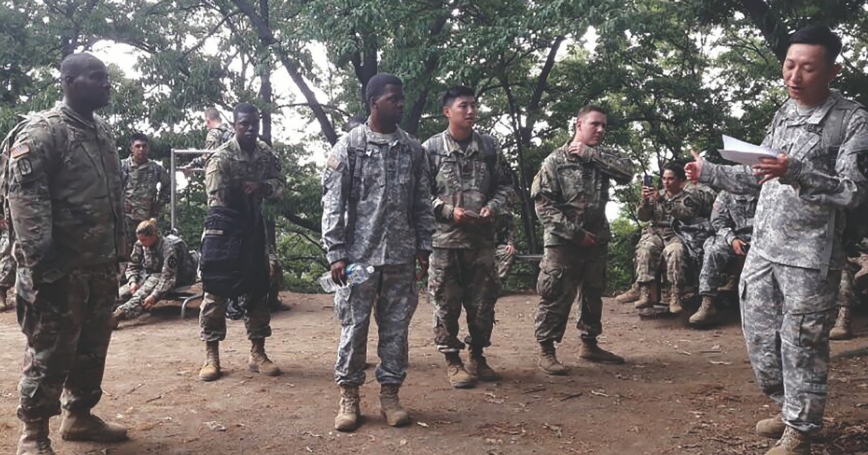 Soldiers hike up Pinnacle 4, a mountain near Camp Humphreys, for a history lesson on the Korean War and team building for U.S.-ROK forces, June 2017

To start with, Camp Humphreys will become the major U.S. base in Korea, but it will not be the only U.S. base in Korea. In responding to Congressional questions before his confirmation hearings in 2016, Gen. Vincent Brooks, commander of the U.S. Forces Korea, stated that in 2003 there were 174 U.S. sites located across Korea. By the completion of the ongoing consolidation effort, that number will be reduced to 96. My understanding is that many of those are small sites, but that there will still be 20–25 facilities in Korea with major U.S. use in peacetime. Those facilities are very loosely located around two hubs, one at Pyeongtaek and the other in the Daegu-Busan area. But to make these concepts clearer, even around the Pyeongtaek hub, the Osan Air Base with thousands of U.S. military personnel is 15 kilometers north of Camp Humphreys. And with the Daegu-Busan hub, the Kunsan Air Base with many U.S. Air Force personnel is some distance from this hub. As I understand it, a lot of the details for future U.S. facilities in Korea are still being negotiated. Still, the eggs are not all in one basket.

Nevertheless, a fairly large percentage (I don't know the percentage) of U.S. military personnel and dependents will be located at Camp Humphreys. So there is a degree of vulnerability. But in wartime, many U.S. personnel will disperse from this location as they deploy into the field for a possible conflict with North Korean forces. This would be especially true for many of the 2nd Infantry Division units that would likely be dispersed from Camp Humphreys well before North Korea fires its first shots.

In terms of the North Korean threats to Camp Humphreys, the camp is roughly 100 kms from the closest part of the Demilitarized Zone. Almost no North Korean artillery can reach Camp Humphreys. This was one of the original objectives of then Secretary of Defense Rumsfeld, to move U.S. forces outside of the North Korean artillery range. The 2016 ROK Defense White Paper says that North Korea has about 14,000 artillery pieces and multiple rocket launchers, of which we can assume that probably half or less are near the Demilitarized Zone. The only artillery system that would be able to reach Camp Humphreys is the new North Korean 300mm multiple rocket launcher, and we do not know whether many of these systems have been fielded yet. They apparently went through basic testing last year.

That said, some North Korean theater ballistic missiles likely could cause damage at Camp Humphreys if North Korea targets this facility. North Korea should understand that if it does target Camp Humphreys, the United States may well respond by targeting the North Korean regime leaders. Such a concept would clearly be for deterrence purposes. To deter an adversary, the U.S./ROK must threaten the adversary with suffering greater costs than the benefits the adversary seeks. Since the only thing the North Korean regime really cares about is itself, it would be hard to impose major costs to deter North Korea without threatening the survival of the regime.

Bruce Bennett is a senior researcher and Korea expert at the nonprofit, nonpartisan RAND Corporation.

This commentary originally appeared on The Korea Times on July 24, 2017. Commentary gives RAND researchers a platform to convey insights based on their professional expertise and often on their peer-reviewed research and analysis.