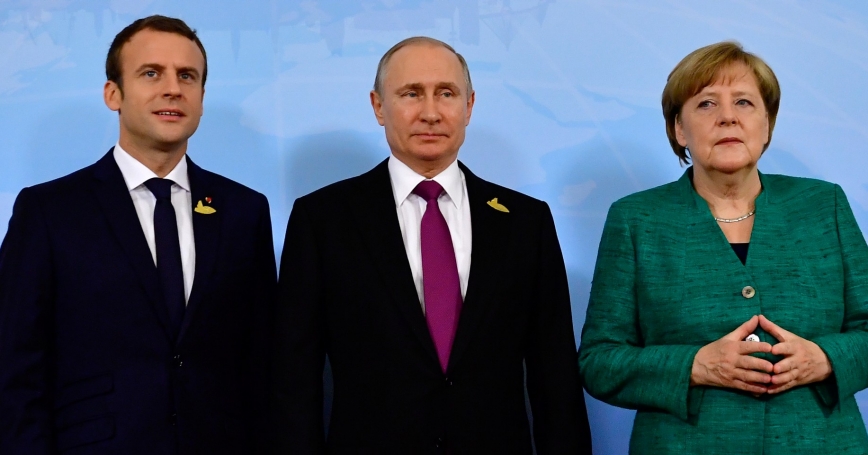 For a while at least, President Donald Trump and Prime Minister Theresa May seem likely to play diminished roles in leading the West in dealing with Russia. While maintaining their vital military/security role in NATO, the United States and the United Kingdom might be better off backing a greater leadership role for continental Europe.

Because of Russia-related investigations by special counsel Robert Mueller and two committees of Congress, and other challenges ranging from tax reform to North Korea, Trump for some time may be unable to maintain steady focus on issues of European security. May's indecisive Brexit negotiation has sparked divisions at home and tensions within the European Union, leaving her also with less bandwidth to address questions of European security.

Prospects for continental leadership, however, have improved. Later this month, German Chancellor Angela Merkel is poised to win a fourth term, although perhaps not a majority in parliament. She would remain the preeminent leader in Europe. Despite sagging poll numbers, French President Emmanuel Macron seems determined to strengthen the EU and France's role.

They will have help. NATO Secretary General Jens Stoltenberg is capable. He is in the forefront in warning about Russia's upcoming Zapad (West) military exercise on the border of Poland and the Baltics, and in backing alliance defensive measures there. Last March, European Council President Donald Tusk was overwhelmingly re-elected. He has exercised prudent leadership and been a moderating influence on the Brexit crisis.

For over three years, Russia's simmering war in eastern Ukraine has presented the main threat to European security. The Normandy format negotiation (Germany, France, Russia and Ukraine) and its Minsk II ceasefire agreement have not solved the crisis, but may have helped reduce fighting. The Trump administration and Congress are hinting that America may raise the costs to Russia of its aggression by helping to arm Ukraine. In the past, many Europeans have opposed this.

Unity with Europe is critical; otherwise EU support for sanctions on Russia could weaken. This was evident with the latest escalation of U.S. sanctions, mandated by Congress. Some in Europe claim they might weaken energy security by impeding construction of the Nordstream II gas pipeline from Russia to Germany. Washington is sensitive to these concerns, and knows that German leadership is essential to maintaining EU consensus on sanctions.

The United States and Europe cooperate closely on security, despite U.S. concerns that Europe spends too little on defense. NATO is rotating more forces through its eastern and Baltic flanks, where perceptions of Russian threats are acute. Washington has appointed a negotiator, Ambassador Kurt Volker, to resume U.S.-Russian discussions on the Ukraine conflict. These talks reinforce the Normandy process rather than replace it.

Europe has long been front and center in defending Western democratic values and respect for human rights. It should now be more active in countering Russian election interference. Despite a U.S. intelligence consensus, Trump has been reluctant to blame Russia for meddling in last November's elections. British officials say Moscow did not interfere in U.K. elections last June.

On the continent, however, Russian political threats are more clearly recognized. Last May, Macron's En Marche political party said it had been the “victim of a massive, coordinated” hack, which U.S. intelligence said was likely Russian. Cyber thieves from Russian intelligence stole large amounts of Bundestag data in 2015, and recently German authorities repelled repeated Russian cyberattacks. Merkel has been vocal in warning of the risk of Russian interference in Germany's upcoming election, even as her foreign minister wants to avoid a new “ice age” with Moscow.

In some global crises European leadership can augment, but not replace, American. The United States leads efforts with Japan and South Korea to pressure North Korea, and with China and Russia to rein in their cooperation with it. Continued U.S. backing for the Iran nuclear accord is critical to Western security, as is U.S. military leadership in Afghanistan. If America were to falter—such as by pulling out of the Iran deal—risks to global security would climb.

Dealing with Russia requires broader Western exertions. Since World War II, America and the United Kingdom have played disproportionate roles, enhancing European security. Now continental Europe will have to assume more of the burden in advancing Western values and interests with an unpredictable and at times unruly Russia.

Denis Corboy is a visiting senior research fellow at King's College London and was European Union ambassador to Armenia and Georgia. William Courtney is an adjunct senior fellow at the nonpartisan, nonprofit RAND Corporation. He was U.S. ambassador to Kazakhstan, Georgia and a U.S.-Soviet nuclear testing commission. Kenneth Yalowitz is the director of the Conflict Resolution program at Georgetown University and a global fellow of the Woodrow Wilson Center. He was U.S. ambassador to Belarus and Georgia.

This commentary originally appeared on U.S. News & World Report on September 12, 2017. Commentary gives RAND researchers a platform to convey insights based on their professional expertise and often on their peer-reviewed research and analysis.