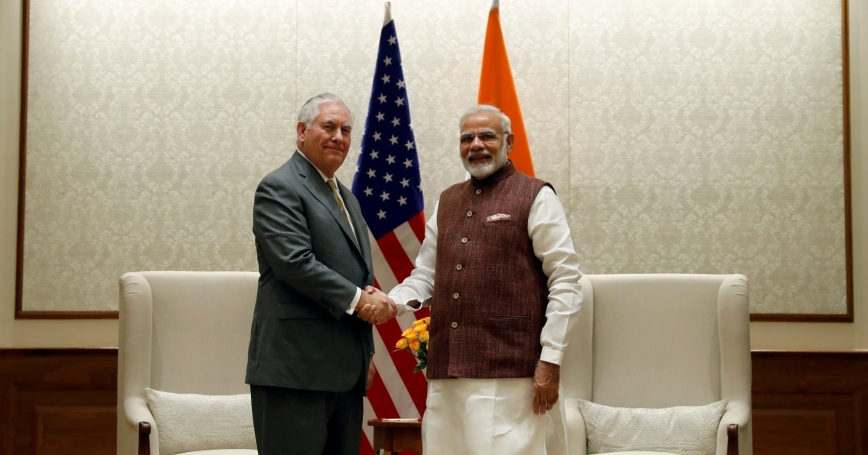 It has become commonplace to caution American policymakers against irrational exuberance when dealing with India: Keep expectations low (conventional wisdom goes) and you won't be disappointed. In the wake of U.S. Secretary of State Rex Tillerson's visit to New Delhi this week, perhaps the same advice could be directed to India's leadership. Despite a warm welcome by Prime Minister Narendra Modi, the pleasantries at Gandhi Smriti, and the promises of “an even brighter future,” don't expect a radical change in U.S. policy. There are structural reasons for India to moderate its expectations of what it can realistically expect from the Trump administration, regardless of anything the secretary of state—or even the president—might say.

There is no new U.S. policy towards Pakistan—and there won't be one soon. On August 21, Trump announced a “change [in] the approach and how to deal with Pakistan. We can no longer be silent,” he stated. Ears pricked up in Islamabad and New Delhi alike. But in the two months since the administration's roll-out of its new strategy for South Asia, no significant actions towards Pakistan have been made public. If a sea-change is underway, it is hidden beneath the waves.

This should not be a surprise: So long as the U.S. has troops in neighboring Afghanistan, it will be reliant on Pakistan for logistical support, transit, and—perhaps most importantly—Islamabad's influence with both the Taliban and its affiliated Haqqani Network. With the addition of about 5,000 U.S. troops to the effort in Afghanistan—roughly a 50 percent increase over the baseline at the end of the Obama administration—U.S. exposure will grow rather than recede.

A concrete demonstration was provided just two weeks ago: On October 12, an American woman, her Canadian husband, and their three children were released after five years of Haqqani captivity. Whether this was a conveniently-timed military rescue or a secretly-negotiated operation, it reminds the U.S. of Pakistan's ability to help—and to harm. Afterwards, Tillerson expressed his “deep gratitude to the Government of Pakistan and the Pakistani Army,” and posited “a U.S.-Pakistan relationship marked by growing commitments to counterterrorism operations and stronger ties in all other respects.”

The U.S. and India don't see eye-to-eye on China. Earlier this month, Tillerson made a major speech contrasting America's relationships with India and China. “We'll never have the same relationship with China, a non-democratic society,” (PDF) he said, “that we can have with a major democracy” such as India. He criticized China's Belt-and-Road-Initiative (BRI) infrastructure program, and proposed a joint Indo-U.S. effort towards “countering that with alternative financing measures.”

But Tillerson said nothing about where the funds for such an ambitious venture might come from. China has pledged $46 billion for the Pakistan piece of its framework alone. The U.S. administration plans to reduce its foreign affairs budget by 28 percent—a cut that Tillerson fully supports. India is unlikely to spend countless crores for the construction of roads and railways in other nations when it has so many infrastructure needs of its own. Moreover, India has consistently balked at any suggestion of a de facto alliance geared at limiting China's influence. Perhaps this summer's stand-off at Doklam will turn out to be a game-changer? If so, Delhi may remember that the Trump administration—in contrast, for example, to that of Japan's Prime Minister Shinzo Abe—refrained from any statement in support of India throughout its most serious confrontation with China in a quarter-century.

The U.S. and India have different visions for Afghanistan—and for Iran. The Trump administration views Afghanistan as an American project, and sees India's role there in transactional terms. “India makes billions of dollars in trade from the United States,” the president said in his August 21 speech, “and we want them to help us more with Afghanistan.” But India has already, for its own reasons, supplied about $3 billion in aid and investment. Much of this assistance is geared towards linking Afghanistan's road network to the Iranian port of Chabahar. India's development of Chabahar Port is perhaps its most noteworthy counter to China's BRI network, and a secure road-rail-harbor connection would enable landlocked Afghanistan to forge trade relationships around the world without transiting Pakistan.

Such connectivity would be good for Afghanistan, good for India, and good for Iran—but that's the hitch: The Trump administration is actively seeking to choke off Iran's global economic activity. On October 13, the president declined to certify a key provision supporting the 2015 nuclear deal forged between the U.S., Iran and six other parties—an agreement he described as “one of the worst and most one-sided transactions the United States has ever entered into.” Trump announced several new sanctions, and has been quite clear about his intention to step up economic pressure on Tehran. Any Indian investment in Afghanistan geared towards connectivity with Iran—that is, the lion's share of it—will likely run into a buzz-saw of U.S. opposition.

The visit of Secretary Tillerson will not be the last moment of irrationally high hopes during the current U.S. administration. At some point, there will likely be a presidential visit to India. If the Washington rumor mill is accurate, U.S. Ambassador to the United Nations Nikki Haley may eventually succeed Tillerson and serve as the first Indian-American Secretary of State. At such moments, many commentators will predict a revolution in U.S.-Indian relations. And then—as now—they are likely to be wrong.

But the good news is quieter, and more durable: The relationship between the two nations has grown progressively closer over the past two decades, under three U.S. presidents and three Indian prime ministers, representing the full range of both countries' political spectrums. There will be ups and there will be downs; in international policy, there always are. But the warming trend in Indo-U.S. relations is almost certain to continue—no matter who sits in the White House, or who comes calling at South Block.

This commentary originally appeared on The Indian Express on October 27, 2017. Commentary gives RAND researchers a platform to convey insights based on their professional expertise and often on their peer-reviewed research and analysis.