America Is Great at Fighting Terrorism, but Terror Is Alive and Well 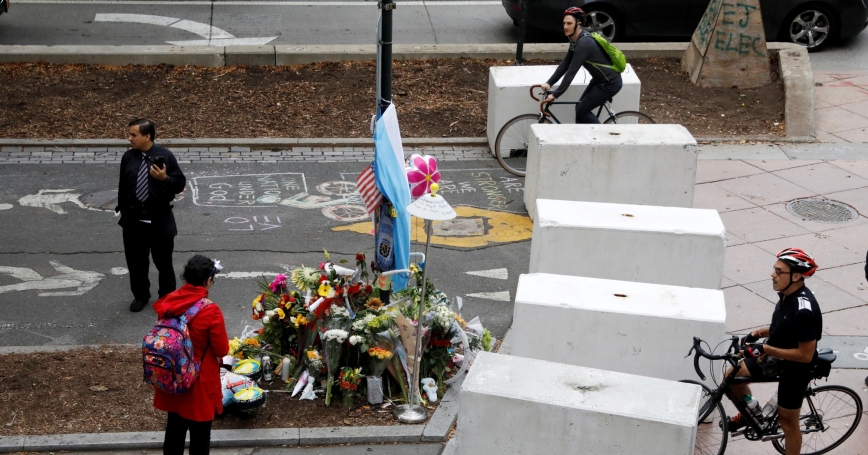 Protective barriers are placed along a bike path near a memorial for the victims of the October 31 attack in New York City, November 3, 2017

The tragic Halloween attack in New York is the latest reminder that al-Qaida, ISIS, and those they inspire have adopted a strategy of pure terrorism where the victims appear indiscriminate and the attacks inexplicable. A relatively unknown radical selects an unprotected public space, turns a widely available tool into a weapon, and introduces himself to the world by attacking unsuspecting, innocent neighbors without warning. This scenario, repeated several times this year, appears to be the new normal for terrorism threats.

The unfortunate reality is that this evolution in terrorism may be the fruit of America's success in the War on Terrorism. Counterterrorism, since 2001, threatens terrorist safe havens, infiltrates terrorists' financial and communications networks, hardens critical infrastructure, and connects the dots among the intelligence and law enforcement communities. The goal was to prevent another 9/11 in the U.S., and by that measure, the strategy has been a success. Still, attacks since then have caused terror that persists at high levels.

There is an important distinction between terrorism—the violent actions used by terrorists to affect political realities—and terror—the reaction these actions cause in the affected population. Unless radical jihadi terrorism is eliminated, which history suggests is unlikely, existing counterterrorism strategy needs to be complemented with a strategy to counter terror. Doing so requires taking three steps: Setting and tracking progress toward the right goals, using public communication to reduce terror, and denying aspiring radicals a claim to their ultimate objective: terror.

The measures used to count the success of U.S. counterterrorism strategy typically include statistics such as numbers of suspects, attacks, and victims. As terrorist attacks evolved into pure terrorism, the level of terrorism in the U.S. remains low—based on these same measures—compared to terrorism threats in the U.S. and western Europe in the 1970s and 1980s.

Using the prevention of mega-terrorism or the number of attacks to measure the success of counterterrorism policies and operations likely overlooks a failure of America's counterterrorism strategy to reduce terror. To many, terrorism remains a constant and seemingly random part of society. Despite the assessments of the country's national security leaders, terrorism consistently places atop public opinion polls about leading national security threats.

The success of a counterterror strategy should also be measured in terms of public attitudes about the confidence in public safety and security and perceptions of the effects terrorism has on individual and national well-being and national security. Efforts to track these views are limited to these occasional public opinion polls. More detailed surveys of public attitudes are needed to truly understand the progress being made to counter the spread of terror. These surveys of public attitudes could help better explain what is influencing attitudes about well-being, why they vary across groups in society, and how they change over time. They could also provide a baseline for counter-terror strategies.

As individuals, our reactions to terrorist attacks are influenced by the event and our existing knowledge about terrorism. Our reactions are shaped by what we knew before the attack, the response we expect during and after it, and what we learn about the attacker's plans, motives, and actions. When information is not available, our natural reaction is to fill in the details with our experiences and inference. Through this process, people often adopt beliefs that increase fear. Addressing these uninformed conclusions provides an opportunity to counter terror.

Much like vaccines make society resilient to disease, experts in risk communication demonstrate how well-crafted, effectively delivered, informative communication can inoculate the public against terror if used before events and reduce it when delivered during and after them. For example, a study of the effectiveness of inoculation messaging (PDF) for crisis communication showed that recipients of pre-crisis messages that acknowledge threats and the efforts taken to address them are more confident of the government's ability to prevent them and minimize their consequences. To apply inoculation messaging as a tool, the media and government must know what questions the public has about terrorism, and deliver clear and accurate information that answers these questions before, during, and after events.

One factor presumed to increase terrorists' motivation for attacking is their ability to contribute to a larger cause and the attendant fame that comes with it. Al-Qaida and ISIS rhetoric paves the path to a meaningful existence for many radicalized individuals who in other ways may be viewed to be lost. Minutes after an attacker's identity is known, his picture and name spread instantly across media and social networks, affirming the contribution the attacker has made to spread terror and advance his adopted cause.

Government and the news media can play a role in advancing a counter-terror strategy by establishing codes of conduct for reporting on terrorism that include omitting the names and images of attackers and establishing practices for sharing descriptions that characterize the other details about the threat as they are available. Reporting practices like these would deny attackers glory yet still provide the public with the information needed to be informed about the threats faced and the steps public officials are taking to address them.

When terrorists adopt a strategy of pure terror, it is challenging to prevent attacks like those seen in Nice, Columbus, London, Barcelona, or New York. Instead, strategies are needed to counter terrorism's ultimate aim—namely, to instill fear—and to remove some of the incentives of those who might be motivated to conduct them.

This commentary originally appeared on Fortune on November 16, 2017. Commentary gives RAND researchers a platform to convey insights based on their professional expertise and often on their peer-reviewed research and analysis.