How to Help Syrians — Without Helping Assad 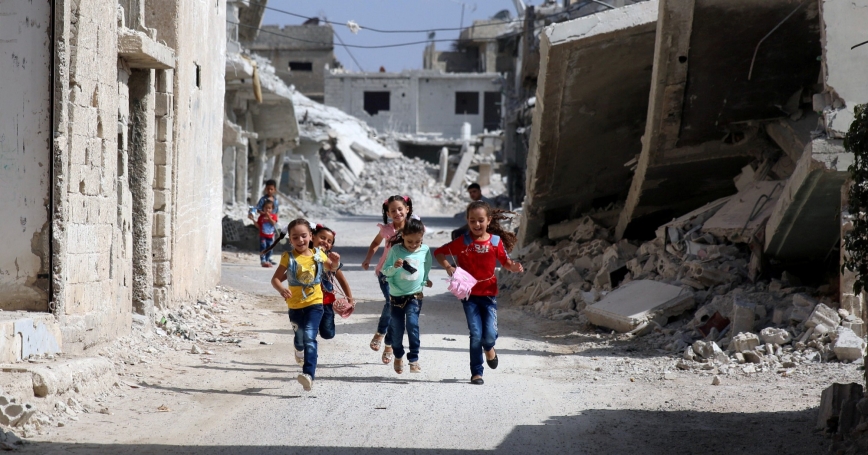 Children run along a damaged street as they celebrate the first day of the Muslim holiday of Eid al-Adha at a rebel-held area in Deraa, Syria, September 1, 2017

The Syrian civil war is approaching, if not a conclusion, at least a hiatus that might be converted into a conclusion. More than six years of efforts to overthrow Syrian President Bashar al-Assad have failed. Secretary of State Rex Tillerson's comment last week that “the reign of the Assad family is coming to an end” was divorced not only from reality but from U.S. policy, which is focused on fighting the Islamic State rather than the Damascus regime. At this point, even the most forceful advocates for regime change have ratcheted down their expectations to consolidating a few small enclaves inside Syria where Arab oppositionists and Kurdish groups enjoy security and some measure of autonomy.

The effective abandonment of U.S. and allied efforts to change the Syrian regime militarily, however, does not mean they no longer have any possible influence in Syria or that the only option now is walking away. They do still have leverage, but it derives primarily from their ability to offer — or withhold — reconstruction assistance.

There is naturally great reluctance in Washington, as in European and regional capitals, to assist rebuilding a country run by Assad and supported by Russia and Iran. At the same time, they have a major interest in ending the Syrian civil war, helping the millions of Syrians displaced during the conflict, preventing the re-emergence of the Islamic State and thwarting Iranian efforts to repopulate parts of Syria with Shiite Muslims oriented toward Tehran. The liberation of areas under Islamic State control by U.S.-backed forces has been one of the few recent successes in Syria. But a failure to invest in these areas' reconstruction, security and return to economic activity would heighten the risk of a costly relapse and prevent refugees from returning home. Perversely, it would also empower Russia and Iran by further deepening Damascus's dependence on them.

The U.S. and its allies could offer reconstruction assistance to any Syrian community that held internationally monitored local elections.

How could the United States and others provide reconstruction assistance without legitimizing the Assad regime and its sponsors in Moscow and Tehran? We recommend a conditional, bottom-up approach, based on local elections to the communal councils that were called for in the Syrian constitution but never formed. The United States and its allies could offer to provide reconstruction assistance to any community that held internationally monitored local elections — as long as the resultant local council remained an effective partner in the delivery of this aid.

Our proposal does not depend on the United States providing aid to or through the Syrian government. It does depend on the United States employing its influence with the World Bank, the International Monetary Fund, the United Nations, the European Union and other bilateral donors to allow reconstruction assistance to flow to both regime- and non-regime-held areas where the existence of representative local partners can be identified. This will require some interaction with the Syrian government but not the direct provision of assistance resources to or through its ministries.

The regime, of course, which has proclaimed the goal of recovering “every inch of Syria,” might try to prevent the delivery of such assistance. But it also knows it does not have the manpower to govern or provide security across the entire country or the resources to help stabilize those parts not under its control. In exchange for peace and recognition of its de facto sovereignty, it might even see an interest in an outside rebuilding effort that would help bring quiet. Russia, whose primary goals of avoiding regime change, denying the United States a victory and preventing Sunni extremists from ruling in Damascus have been achieved, might also press it to accept. If the regime did block the delivery of assistance to areas under its control or sought to deny local self-government to the local authorities, assistance to these areas would end, and nothing would have been lost from having tried to proffer it.

Providing reconstruction assistance on a community-by-community basis will at a minimum allow some aid to flow to some non-regime-held areas and so reinforce representative government in some communities. If the regime allowed local councils to form and work with the donor community, the beginning of a bottom-up reform process could be set in motion.

Providing assistance in this manner is obviously much more complex than working with and through the central government, but there is little chance of that occurring as long as Assad remains in power and even less chance he will depart anytime soon. A bottom-up approach therefore offers a better prospect that at least some areas would see increased economic activity and political development, some refugees would return and some progress could be made toward reform of the Syrian state. The alternative is the likelihood that further conflict will prevent refugees from returning and give new life to al-Qaeda and the Islamic State.

James Dobbins is a senior fellow and Jeffrey Martini is a senior analyst at the RAND Corporation. Philip Gordon is the Mary and David Boies Senior Fellow in U.S. Foreign Policy at the Council on Foreign Relations.

This commentary originally appeared on The Washington Post on November 3, 2017. Commentary gives RAND researchers a platform to convey insights based on their professional expertise and often on their peer-reviewed research and analysis.