A 'Glass Half-Full': Next Steps for Enhancing Deterrence on NATO's Eastern Flank 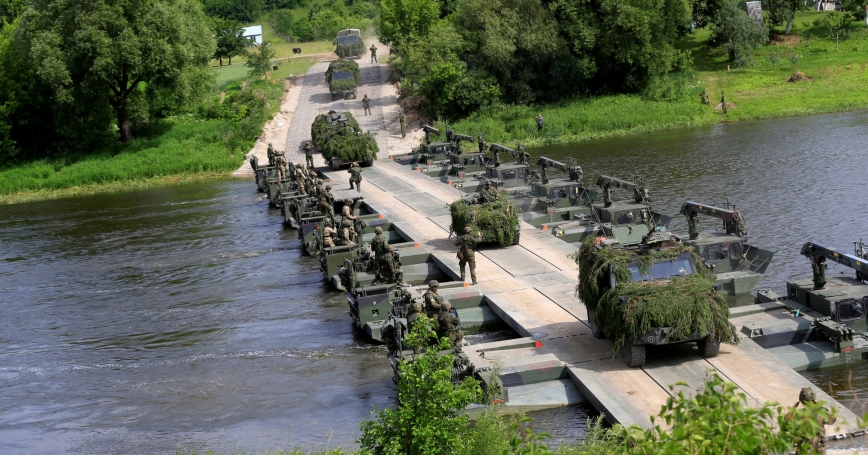 This month's Munich Security Conference, which brings together senior defense and foreign policy officials and experts from the United States, Europe, and beyond, provides an opportunity to take stock of where the NATO alliance stands with respect to its efforts to bolster deterrence on its eastern flank—efforts that began in response to Russian aggression against Ukraine in 2014.

Three and one-half years have passed since President Obama stood in central Tallinn, Estonia, and told a crowd of 300,000 that the NATO alliance would ensure that the Baltic states would never again lose their independence to a foreign aggressor. Those were bold words that spurred the defense communities in many of NATO's member countries to examine the alliance's preparedness for war on its eastern flank. War games and analysis conducted in 2015 and 2016 by the nonprofit, nonpartisan RAND Corporation and others revealed serious deficiencies in the capabilities, posture, and capacity of NATO forces to defeat a Russian attack on the Baltics with conventional air and ground forces within an adequate time frame.

Since then, the United States and key allies have taken steps toward redressing the imbalance in military power that exists between NATO and Russia in Northeastern Europe. Enhancements under the United States' European Reassurance/Deterrence Initiative, complemented by moves agreed to at NATO's 2016 Warsaw Summit, have measurably improved NATO's ability to respond to threats of aggression by Russia. Chief among these are:

These and other initiatives constitute significant improvements in NATO's deterrence posture vis-à-vis a potentially aggressive Russian Federation. But NATO's defense planners must be clear-eyed about what remains to be done. Many of the gaps in NATO's defense capabilities that war games and analysis have identified remain unfilled. And Russian forces have not stood still.

Over the past two years, Russia has activated new armored, infantry, artillery, and air defense formations in its Western military district and moved additional units there from deeper within Russia. And as Moscow continues to invest in modernized systems to upgrade its armored forces, it is improving its long-range strike and targeting capabilities, and continues to augment and improve its already world-class surface-to-air missiles, all while gaining valuable combat experience in Syria.

Analysis points to a number of steps the allies can take in the coming few years that, collectively, have the potential to ensure that anyone contemplating military aggression against the Baltics or other states on NATO's eastern flank would have serious doubts about the efficacy of military action and no doubts that such action would carry severe costs for the aggressor. The most significant of these steps are outlined below:

None of the actions listed need to cost huge amounts of money or take many years to implement. The additional forces that the alliance should deploy forward or prepare for rapid follow-on action, for the most part, already exist. What is needed now is for member states to increase their readiness and, where appropriate, invest in the infrastructure to house them or rotate them through the theater. And the new systems that are called for are, by and large, either already available or in mature stages of development.  The U.S. and allied defense establishments need not and should not await the emergence of exotic new “third offset” capabilities before moving decisively to fill these gaps in defensive capabilities.

Relatively modest but sustained increases in defense spending, if focused on the types of initiatives and capabilities listed, can substantially raise the credibility of NATO's deterrent posture on its eastern flank. Given the incalculable costs of a failure of deterrence there, these investments seem warranted.

The authors are defense analysts at the nonprofit, nonpartisan RAND Corporation.

This commentary originally appeared on The RAND Blog on February 12, 2018. Commentary gives RAND researchers a platform to convey insights based on their professional expertise and often on their peer-reviewed research and analysis.